Initially criticized for its links to the retail giant, ten years on the Crystal Bridges Museum of American Art has surprised many in the world of culture for its innovative and progressive practice. 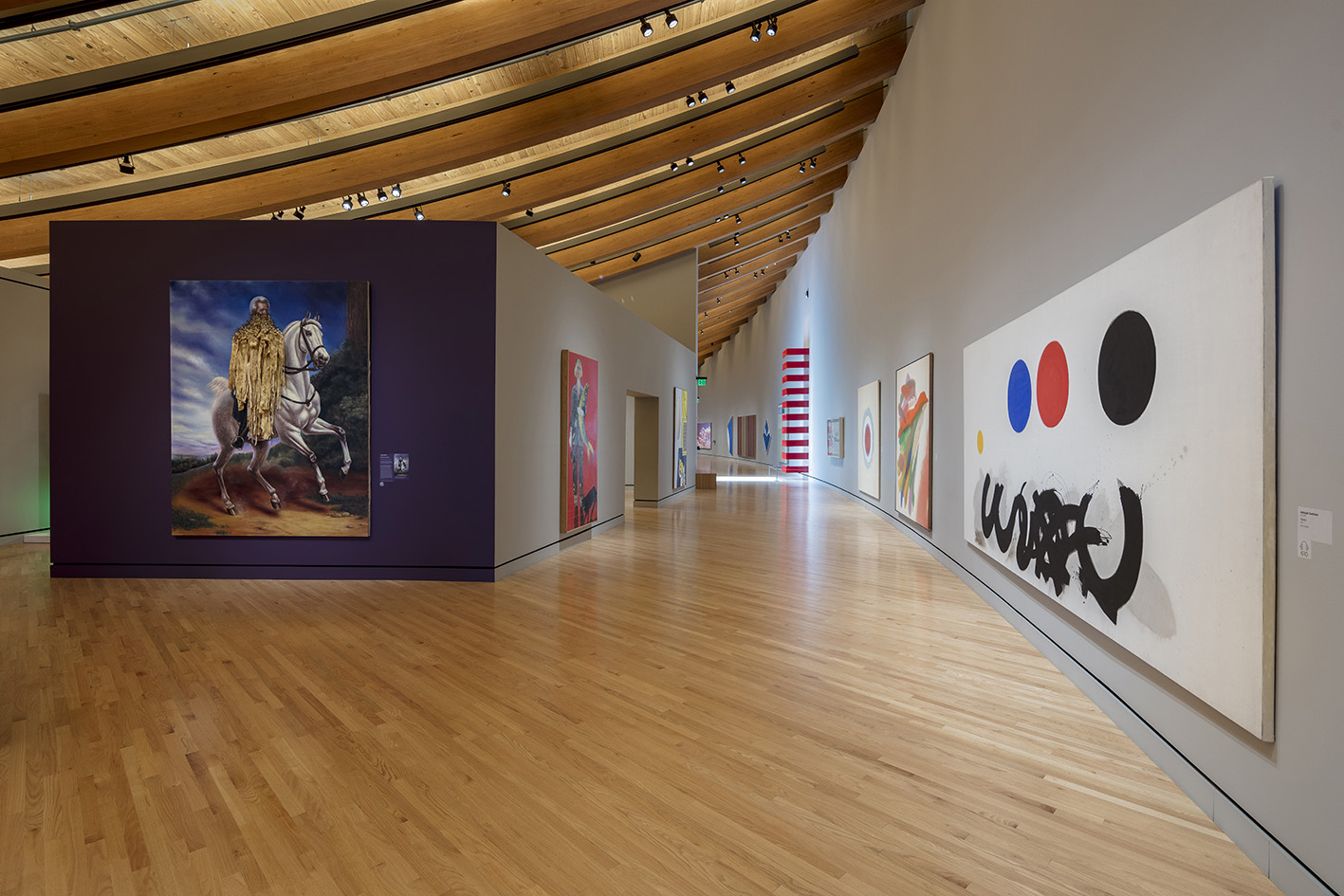 Opened in 2011, Crystal Bridges Museum is dedicated to the collection, exhibition, study, and preservation of American art. Founded by Alice Walton, an heir to the Walmart retail empire, the museum originally attracted controversy due to its aggressive acquisition strategy, as well as its close connection to Walmart, long criticized for the exploitative labor practices. In the decade since, Crystal Bridges has largely won over early critics through its commitment to education and community outreach, generous support of research in the field of American art, and dedication to investing in the art by underrepresented groups.

Alice Walton’s Vision
Located among the picturesque Ozark Mountains in northwest Arkansas, Crystal Bridges is a product of the singular vision of Alice Walton, ranked by Forbes as the richest woman in the world in 2020. Walton announced the creation of the museum in 2005 and assembled the initial collection of some twelve hundred works in conversation with a small number of advisers. She also chose the location for the museum on the outskirts of Bentonville, Arkansas, the town where her father Sam Walton opened his first Five and Dime store in 1950. Bentonville is still the site of Walmart’s world headquarters and has been the fastest-growing city in Arkansas for the past ten years.

Early Controversy
With an endowment of eight hundred million dollars from the Walton Family Foundation, Crystal Bridges is among the wealthiest museums in the United States. From the beginning, the institution has been a major player on the market for U.S. historical and contemporary art. However, some of its acquisitions have caused controversy, including Walton’s purchase of Asher Durand’s renowned Kindred Spirits in 2005. The Hudson River School painting depicts the painter Thomas Cole and the poet William Cullen Bryant standing on a rocky ledge overlooking the Catskills Mountains. Bryant’s daughter donated the work to the New York Public Library in 1904, where it remained for over a hundred years. In 2005, the Library decided to sell the painting through a sealed-bid auction managed by Sotheby’s. Walton reportedly paid about $35 million, with her bid surpassing the joint offer by the Metropolitan Museum of Art and the National Gallery of Art in Washington, D.C., two institutions that came together in an effort to keep the painting on the East Coast. Critics decried the perceived loss of the painting, seen as an integral part of New York’s cultural patrimony, as well as the choice of the sealed-bid format with its lack of transparency.

The proposed Crystal Bridges Museum again found itself at the center of a media storm provoked by the sale of Thomas Eakins’s 1875 painting The Gross Clinic. In 2006, Thomas Jefferson University in Philadelphia, which owned the work at the time, announced that it had accepted a joint offer by the National Gallery and Crystal Bridges. The news was met with outrage from Philadelphia citizens and institutions, who believed that the celebrated painting by one of the city’s most famous artists was a part of their inalienable heritage. The fundraising effort that followed was able to collect a large enough sum to match the original offer and The Gross Clinic stayed in Philadelphia, now owned jointly by the Philadelphia Museum of Art and Pennsylvania Academy of the Fine Arts. In 2007, Walton purchased Eakins’s portrait of Professor Benjamin Howard Rand (1874) from Thomas Jefferson University to compensate for the loss of The Gross Clinic.

Bringing Art to the American Heartland
The debates surrounding these and other acquisition efforts by Crystal Bridges often focus on the corporate ties of the museum, which are the source of its seemingly unlimited funds. As a response, the defenders of the museum inevitably point to the origins of the major East Coast institutions that were created by the industrial barons of the Gilded Age. They suggest that what is actually at stake is the resistance of East and West Coast elites to accepting the fact that canonical works of American art are “disappearing” into the rural heartland. Yet for Crystal Bridges’ supporters, this is one of the institution’s strongest points of success, as it brings world-class art to a region that has long been deprived of cultural institutions of national significance.

Since opening in 2011, Crystal Bridges has welcomed more than 5 million visitors, with about half coming from within the state of Arkansas and the rest from the other regions of the U.S. and abroad. The institution fosters wide accessibility through free admission and community outreach. This includes The Windgate School Partnership Program, a long-term longitudinal research project that aims to study the effects of site visits and art education on childhood development and academic progress. Additionally, the museum actively participates in collaborative projects with other U.S. and international institutions and is also the home to the Tyson Scholars Program that supports research by emerging and established scholars in the field of American art.

Bridging Art and Nature
The mission of Crystal Bridges Museum is “to welcome all to celebrate the American spirit in a setting that unites the power of art with the beauty of nature.” Central to this stated goal is the museum’s building, designed by the Israeli-born Boston architect Moshe Safdie. The museum complex consists of eight linked pavilions, with two galleries forming actual bridges over artificial ponds that are fed by the Crystal Spring running through the site. The museum’s location at the bottom of a tree-covered ravine creates an effect of immersion in nature. The two-hundred-thousand-square-foot museum is surrounded by 120 acres of wooded hills that obscure the horizon and enclose the building and numerous outdoor art installations within the forested setting. The harmonious balance of art and nature is also reflected in the choice of the building materials. The museum’s copper roofs and pine beams embedded into concrete walls are meant to patinate over time, further blending with the colors and patterns of the surrounding landscape. Numerous glass-enclosed walkways bridge the interior and the exterior, rendering the natural world an integral element of the museum’s design.

This emphasis on the integration of landscape and architecture is indebted in part to one of the most famous American architects of the 20th century, Frank Lloyd Wright. Fittingly, his work is featured prominently at the museum in the form of the Bachman-Wilson House. Built in 1956 along the Millstone River in New Jersey, the house was in danger of being flooded, which led to Crystal Bridges acquiring and relocating the entire structure to the museum grounds in 2015. Another iconic example of American design and architecture at the site is Buckminster Fuller’s Fly’s Eye Dome (1966/81) which was installed in 2016. The porous structure, made from white fiberglass, simultaneously stands out within its forested setting and serves to frame the landscape, opening an interplay between the man-made and the natural.

The Collection and New Acquisitions
Crystal Bridges’ collection spans five centuries of American art ranging from the Colonial era to the present day.  The art is hung with emphasis on a few prominent themes: notions of citizenship and belonging, as well as the complex interdependency between the local, the national, and the global. There is always a selection of works on view by a plethora of canonical American artists: Thomas Cole, Frederic Church, John Singer Sargent, Mary Cassatt, James McNeill Whistler, Norman Rockwell, Edward Hopper, Andy Warhol, Mark Rothko, and many others.

However, it is the modern and contemporary art galleries that work to push the boundaries of art history by including new and underrepresented voices. Art by female artists is featured prominently, including easily recognizable works by Georgia O’Keeffe, Dorothea Tanning, Louise Bourgeois, and Helen Frankenthaler, but also by such less well-known artists as Alice Trumbull Mason, Suzy Frelinghuysen, or Janet Sobel, just to name a few. In 2020, Crystal Bridges acquired an important collection of thirty-one modern and contemporary artworks by twenty-five Native American artists from the Bruce Hartman collection.

Through its recent acquisitions and programming, Crystal Bridges continues to work towards presenting a more diverse and inclusive story of American art. As an example, the exhibition Crafting America, will open at the museum on February 6, 2021. The exhibit, which features over 100 works from the 1940s to the present day, is part of a wider initiative by the museum to expand the definition of American art to include craft and design. In 2020, Crystal Bridges announced a $17.5 million gift from Windgate Foundation dedicated to championing American craft. The gift will allow the museum to establish a dedicated curatorial position and will also support research, public programming, and the acquisition of craft objects. In its first decade, Crystal Bridges has become an important influence on the development of American art. The museum’s forward-looking agenda promises that there will be only further surprises over the next ten years.

Strike MoMA Begins Dismantling One of NYC’s Flagship Museums
Newsfeed
See all news
The YBCA 10: Racial Equality and Climate Justice Fellowships
Corona-Proof Hug: World Press Photo 2021
David Zwirner Heads to Hollywood
Black Cultural Archives Resign Following Controversial UK Racism Report
Not to be missed
Cultural Heritage
La Rochepot Castle, a Sleeping Beauty
La Rochepot Castle, a proud Burgundian sentinel, has withstood attacks…
Cultural Heritage
At Last! The Sacré-Coeur Makes the List
It took a hundred long years before the basilica of Montmartre was…
Cultural Heritage
The Salvation of Parisian Churches?
When she became mayor of Paris in 2015, Anne Hidalgo made the restoration…
Cultural Heritage
The Hidden Treasures of the Banque de France
The vagaries of history enabled the bank to build up a remarkable…