Claude Viallat, the Bull and the Canvas of Nîmes

Between his bullfighting paintings, his emblematic canvases, his exhibitions and the updating of his collections, Claude Viallat never stops working. In his Nîmes studio he explains his various activities. 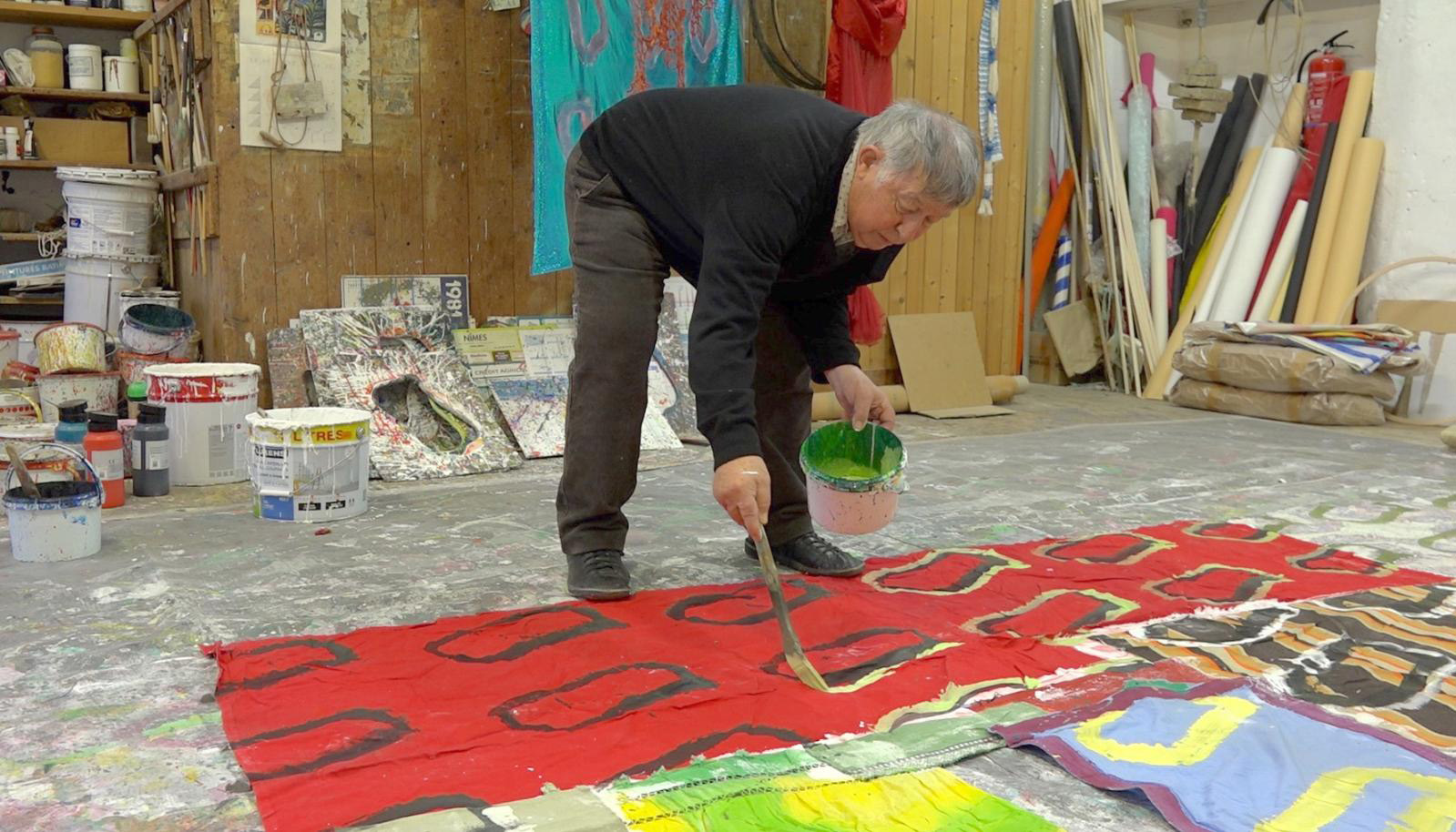 At 83 years old, affable and always alert, the champion of the Supports/Surfaces movement is illustrating a book of poems by Philippe Denis for Éric Coisel publications. At the same time, he is working to enrich his collection of bullfighting objects which are deposited at the city’s Henriette and Claude Viallat Museum of Bullfighting Culture, and is supervising his next exhibitions in Zurich, at the Andres Thalmann Gallery, and at the Priory of Manthes, south of Lyon, with his two assistants Jean Fabro and Alexandre Giroux.

Born and bred in Nîmes, the painter—who recently exhibited at the Venet Foundation located in Le Muy, near Saint-Tropez—moved into the former post house, where he still lives with his wife Henriette, and part of which serves as a studio, in 1990. In the sunny courtyard, the smell of paint mixes with that of old recycled objects and textiles: “On the ground floor is the storage area for my bullfighting objects, where I also store fabric and artifacts for work”. A “partègue”—a pole used to move boats in Occitan marshes—is suspended with a scarlet cloth hanging from it, a work by his late associate Toni Grand. Nearby, a trophy (“Bull Slaughter”) overlooks the cheerful maze of wrapped up objects, wooden hoops and textile books.

However, most of the action takes place on the first floor, where the former director of the Nîmes Ecole des Beaux-Arts and professor at several art schools works daily. In the main room, with its high ceiling, ordered piles of colorful “pre-worked” textiles sit side by side with a shapeless mass of fabrics, and a bric-a-brac of ropes and other objects. “This is a background from an upholsterer’s workshop that Loïc Bénétière, associate director of the Ceysson & Bénétière Gallery, sent me.” Painted sheets lie flat on the tarpaulin-covered floor, which is sprinkled with multi-colored spots. “Most of the time, I paint flat on the floor; I only use the table to work on small bullfighting pieces or combined fabrics.” In the corner are jars of acrylic paint, tools and curved brushes. On the walls, works, samples, bows, ropes, dream catchers, as well as traditional art.

In the adjoining room, which is smaller and lit by a large bay window, are a mask from Mexico, a sieve from Vietnam and a piece by his friend Daniel Dezeuze. Finally, on the floor, as if on standby, are a few last small wooden bullfighting pieces. From this astonishing, other-worldly, timeless lair, ineffable poetry reflecting his passion for bullfighting, his love of humble, raw media, his obsession for his unique and repetitive “form” and for popular works emanates. Here, Claude Viallat produces figurative works that illustrate his vision of bullfighting culture and those more abstract pieces that “lay bare the pictorial elements that make up the fact of painting”, to quote the adage of the movement that made him famous. “The bull is my family history, everything I know,” confides the artist, looking amused, “while painting is an adventure!”

Knowledge and Adventure
Beyond the creation of “derisory” bullfighting pieces is an immense collector of objects on this theme. “My collection exceeds twenty thousand pieces and covers an infinite variety of media. Every year, I enrich it with bought or exchanged objects. “I have a certain virtue,” he adds, “because I regularly donate pieces that I will never again see in my lifetime.”

As for the “adventure” of his painting, he explains it clearly: “each morning, I don’t know what I’m going to do. Two canvases, a bullfighting drawing, everything is unexpected. I don’t imagine anything, I don’t want anything, I don’t know what color I’m going to use or what it will give me, except that I’ve prepared between seven and ten pots of paints that react differently on the fabric.” And he adds, “I take my medium just as it is in terms of form, dimension, color and material. Painting in a classical way, I work on it raw. I always accept the result, without ever coming back to it, except for my small combined pieces. In this sense, my painting is an adventure with an inevitably positive result, since that is what I’ve decided.”

In the Kingdom of Chance
An artist of “precarious artifacts”, reclaiming the desecration of painting, Claude Viallat admits to being an opportunist. “Yes, because I play with everything that chance gives me! If my medium happens to be printed with a bird motif, then birds will become the building blocks of my canvas. If a fabric has suffered water damage, that will inspire the title of my piece. If I unintentionally spill paint on the canvas, this accident will become the subject…”

What of his iconic form? “In 1966, when I started to paint, painting was dead. The Last Painting, a 1972 work by the art critic Nikolai Tarabukin, explains its end. So, it had to start again from its beginnings. As I wanted to find a form that was neither decorative, figurative, geometric nor representative, I started by dipping a sheet of foam into color, and painted like the builders who stamped the walls of southern kitchens with a sponge. The result was neither good nor bad. To clean my overloaded sponge, I left it overnight in a bath of bleach and water. It disintegrated to give this vague shape, the result of my two hazardous manipulations of it. As good, if not better.”

A Responsive Practice
Marked by modesty and serendipity, his philosophy reflects his desire to “eliminate the difference between artist and craftsman” and is inspired, among other things, by the material culture of indigenous peoples. “I revisit the memory of traditional arts as much as that of cave painting, objects, the history of painting, whether Cubist, Fauvist, Amerindian, Japanese, Picasso, Matisse … At its origins, there is this being who sticks his hand in the mud and places it against the walls of a cave. I wanted to reimagine this gesture and rethink painting differently.” From there, his “spiral” work. “The first thing I make will appeal to another, and so on. What interests me is in which context of my existing work the new piece will be placed, which other pieces will it echo, going right back to that first canvas. “I can also work on various pieces at the same, using one color on several superimposed canvases. In this regard, my form is practically that of a mesh or of a knot. Hence my use of the latter on threads and ropes, the use of nets creating gaps (the mesh) and solids (the knots). It is a system that spirals and responds to itself!”

Moreover, the work of Claude Viallat, which he describes as “calamitous”, is an art concerning the essential. “I work on primary elements such as arcs, circles, rods, a knotted rope, an instrument for measurements and music, even aborted witchcraft, all rites of passage for civilizations. Their elementary knowledge is fundamental.”

In the end, the artist, supported among others by the Ceysson & Bénétière gallery, is anything but contemplative. Suffering from acute collectionitis, he continues to collect the comic strips of his childhood, such as Fantax, Bibi Fricotin and Ivanhoe, which he still appreciates from the inventiveness of the stories and the virtuosity of the drawings. “I also have a certain admiration for the French actor and writer Philippe Léotard who in 1992 titled his book Pas un jour sans une ligne (Not a Day Without a Line), taken from Pliny the Elder.” A maxim perfectly suited to this artist who works night and day, constantly on the lookout, and who has an undeniable vitality.

Art Martket Overview: The Ultra-Contemporary
Newsfeed
See all news
Paris: Open House at the Père Lachaise Workshops
Preemption: Romanelli's "Justice" Is Heading the Musée du Grand Siècle
A Diamond Cross Pendant Fetches €673,100 at Drouot
London: Will the "Portrait of Omai" Enter the Collection of the National Portrait Gallery?
Not to be missed
Artist Studio