In under thirty years, the watchmaker has become a star player, with a publicity policy linked with the Cannes Film Festival, where it has mounted the steps one by one all the way up to the Palme d’Or: its own design. 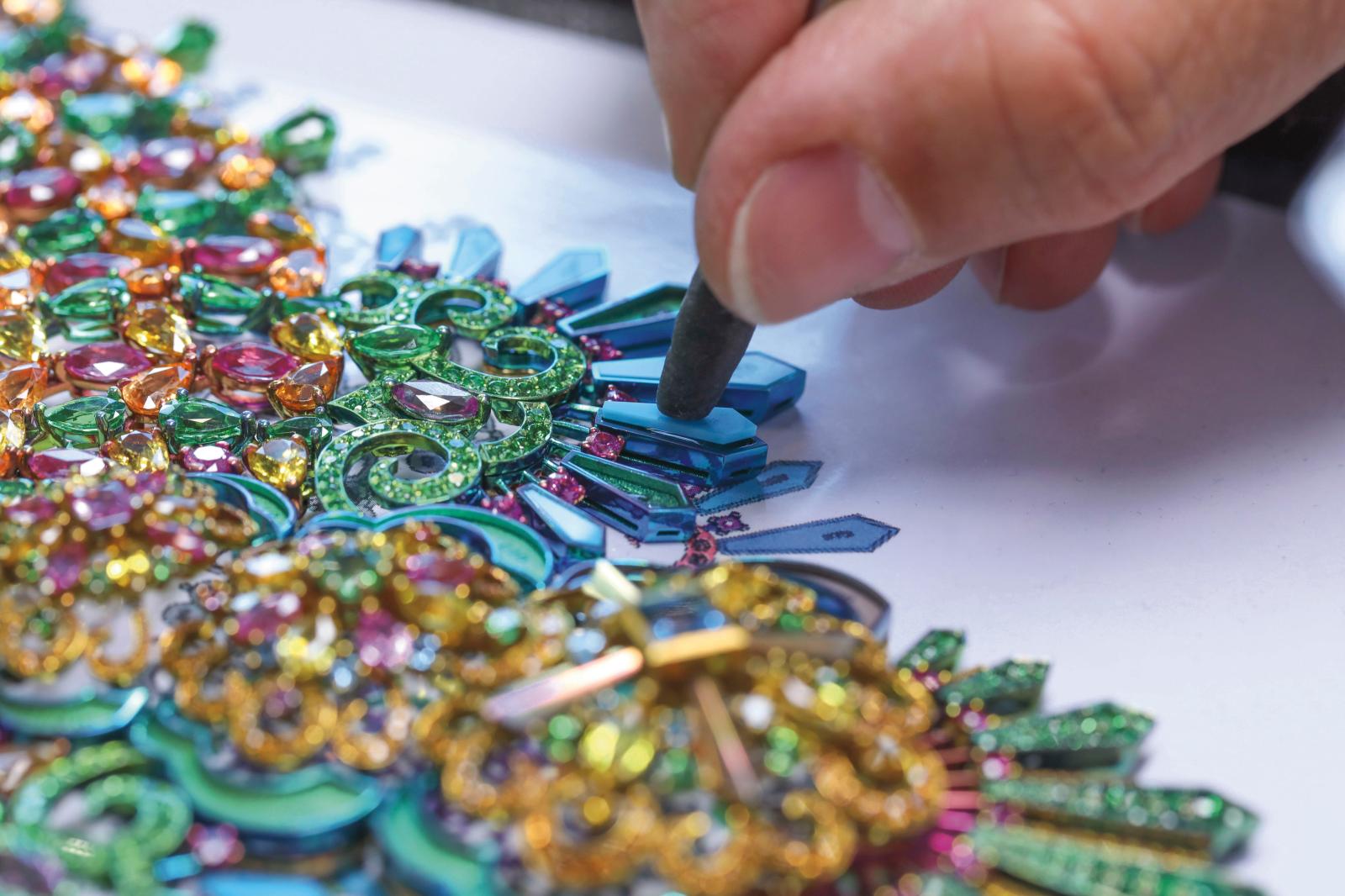 Ultra-glamorous media coverage has contributed to the rising prices of Chopard's jewelry at auction, where bids regularly top its high estimates, like this "Chopardissimo" pendant, knocked down on June 20, 2017, by Tajan at the Hôtel Drouot for €5,200: over €1,000 more than was hoped. To start with, Chopard was a small clock-making business created in 1860, which used to equip the Swiss railway company and supplied fine timepieces exported all over Europe before the war. Then the company gradually declined, until its happy union with German goldsmith and jeweler Karl Scheufele III in the 1960s. The resulting additional know-how enabled the firm to cash in on Sixties trends, producing an explosion of colours with watch faces in hard stone, coral, lapis lazuli, turquoise, and tiger's eye. Yellow gold reigned supreme and forms became liberated, with giant ovals, circles, braided cuffs and kinetic mosaics: a sunny, Pop "trip" that delighted jet-setters living it up in Gstaad, Ibiza and Saint-Tropez, with their Pucci dresses, furs and all-over tans. Today, these supremely joyous vintage pieces are enjoying a dazzling comeback at auction, like the coral watch with a gold cell tooled case that fetched €7,150 in 2018 at Drouot with Pierre Bergé & Associés: €3,000 more than expected.

A Taste for Happiness
This type of item evokes those unbridled years integral to Chopard's DNA: a company that went decisively for glamour and the somewhat "Care Bear" spirit item that became the jeweler's trademark when it launched the first "Happy Diamonds" watch in 1976. The concept was totally new and very simple: a brilliant idea that consisted of placing mobile diamonds between two sapphire sheets. To stop the diamonds from scratching the glass, Chopard coated them with an almost invisible layer of gold. The principle earned the company the Golden Rose of Baden-Baden: a spectacular launching pad all due to Caroline and Karl-Friedrich Scheufele, the third generation of heirs. Compared with the blockbuster jewelers of big two-hundred-year-old companies, Chopard seemed like a teenager, and that was precisely how the brand positioned itself, with clowns, bears, elephants, love messages, and so on. It is like being in the toy department, a little regressively, and the young girls of the 1980s will fight over these new iconic pieces. The moral being that you can have fun with everything, including – and even particularly – something deeply serious like jewelry! The company triumphed with a string of hits, from the "Ice Cube" watch inspired by the Rubik’s Cube to a heart-shaped pendant dotted with diamonds, again – of course – preceded by a "Happy" version.

Diamonds on the Red Carpet
On the strength of its name, the company then moved into refined jewelry. In 1998, it made its first appearance on La Croisette as the official partner to the Cannes Film Festival, with the design of the Palme d'Or, modernised by Caroline Scheufele. The trophy, unchanged since the Sixties, is formed from an 18-ct gold ingot and is now stylised as a palm leaf fixed to a one-kilo crystal cushion: the firm's gift to the prizewinners. It requires forty hours' work to duplicate it if there is an emergency or a shared first place. Cannes also provided Chopard with the chance to usher in its first refined jewelry creations: sensational pieces with an aura this time measured in carats. Every year, the company transports them from its Geneva workshops in an armoured truck to a seventh-floor suite in the Martinez Hotel (nicknamed "the Fortress") to bedeck leading international stars in diamonds: a positive fashion show of jewelry worn by the likes of Uma Thurman, Julianne Moore and Julia Roberts.

An Ethical Jeweler
We are now seeing proof of serious-minded jewelry-making with a label gradually acquiring legitimacy, and sometimes stealing a march on its Place Vendôme rivals by daring to shift position. First, there are the processes. Chopard has introduced a bold new step by scanning its women customers' bodies to make moulds from them, and thus ensure a perfect fit. Then there are the materials. The aim here is to reduce the weight of jewelry by combining gold with titanium. A particularly creative alchemy, as the latter can be coloured in more than fifty tints. The same goes for ceramic, where Chopard makes play with every possible shade. So 30% of the items produced are made with light materials.
After the red carpet, the brand's latest development to date involves green thinking. In July 2018, it joined the highly exclusive club of ethical jewelers, with 100% Fairmined-certified gold. This is a stringent fair trade label that involves close collaboration with artisanal mining companies. Bolivian emeralds, Australian opals, diamonds, metals, behaviours and even roads are all traceable and based on sustainable sources: responsible luxury shored up by a radical attitude that goes as far as refusing rubies from Myanmar because of the Rohingya crisis. But Chopard's laudable approach does not stop there: it also has its own gold foundry, meaning that with this closed-circuit production system, the company can recycle up to 70% of its waste. The same goes for exotic leathers like galuchat, lizard, python and snake, now banished from its watchmaking repertory. A virtually exemplary reconversion, which has brought the jeweller and Caroline Scheufele a sheaf of awards, like "Ecologist of the Year" in 2014 (Bravo Business Awards, Miami). It might seem that there is a great gulf between the Cannes Film Festival photo sessions and "organic" jewelry…… But this is not to reckon with the extreme sensibility of actresses like Marion Cotillard and Cate Blanchett: ardent defenders of the cause, who give Chopard top marks. A considerable asset, which the brand has consolidated through its most recent eco-responsible collaboration with Rihanna, one of the most sought-after stars of the moment. One good thing leads to another.

The Tubogas: The Amazing Tube That Revolutionized Watchmaking
Not to be missed
Analyses