We talked to Brett Gorvy, the co-founder of Lévy Gorvy, former Christie’s Chairman, and Instagram sensation, about the changing horizons of today’s art market, the gallery’s forward thinking approach with pop-ups, artists and new technologies, and his own collecting habits. 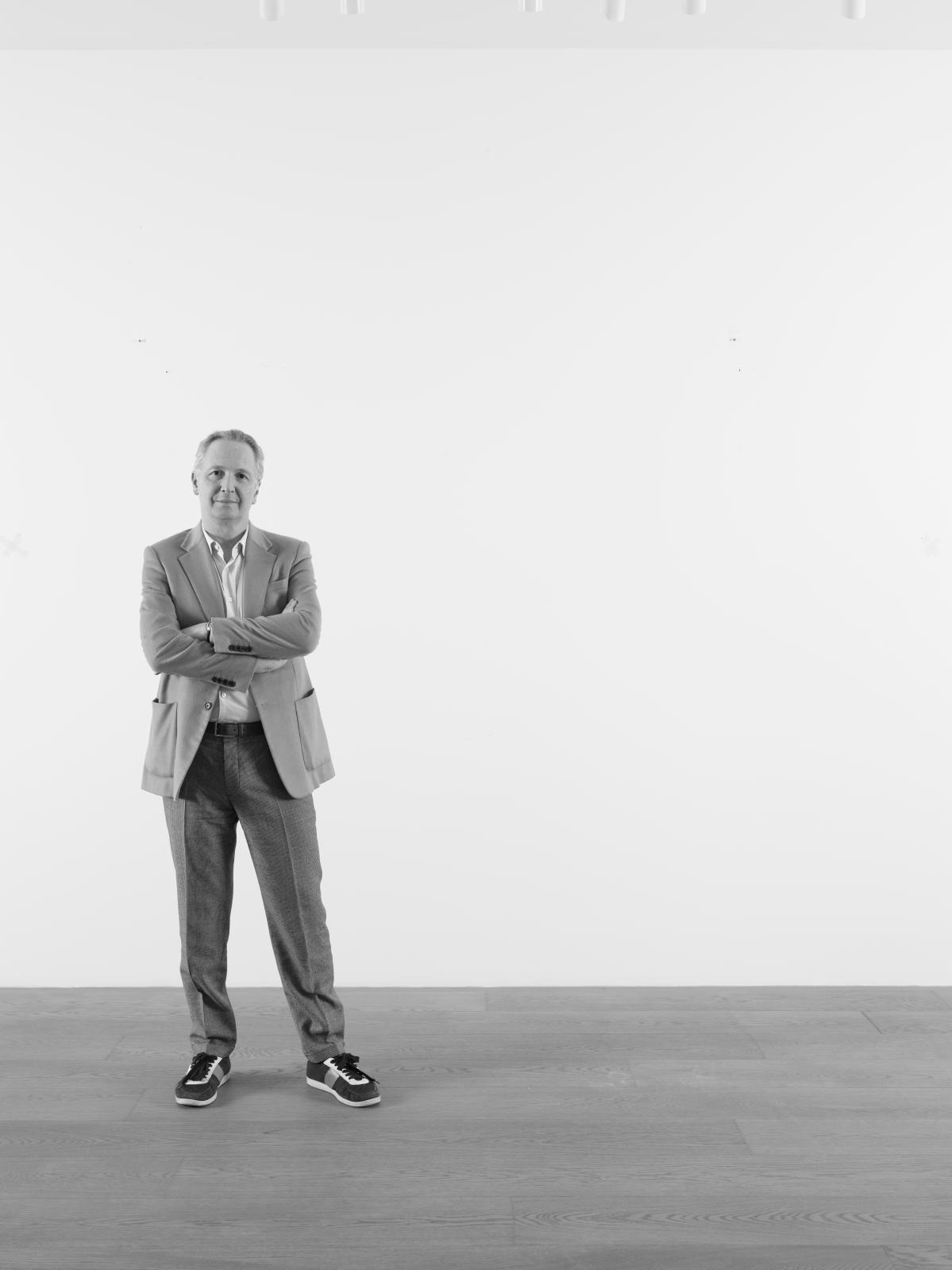 Starting as an art journalist, how did you get involved with the art market, and how do you carry forward that experience to your role now as dealer and gallery founder?
Brett Gorvy. I went to interview Hugues Joffre, who at that stage was head of Contemporary Art at Sotheby’s, about the drop in the contemporary art market in the early 90s and he offered me a job. I had earlier on actually applied for an auction house job and I’d been turned down. It was ironic that a couple of years later I was being offered a job to be head of the department. I had no experience, other than my parents are collectors, so it was part of what I was accustomed to but I had no pricing or trading experience. I turned it down initially more because I loved being a writer that was my passion. A year later he joined Christie’s and he offered me a job again as head of the department. The timing was right, I jumped into it and 23 years later I was still there. It was very much about following one’s passion, you have that as your carrot, it takes you to many adventures. Journalism gives you perspective, the notion of being a writer structures your brain. Being very broad in your perspective, not just in journalism but also working for an auction house gives you a bird’s eye view of the market in real-time. It's also the fact that you have the ability to be global. A world perspective, and that was something we’ve certainly brought into Lévy Gorvy.

We’ve now had almost a year of the pandemic, and hopefully there’s light at the end of the tunnel, could you describe the gallery’s experience in the past year?
B.G. We found immediately that the market just went shut down. You’ve got very little revenue coming in, but you’re trying to hold a business together, especially an international business, which in the last three years had been about growing. The stability of that needed to be really considered. Certainly up until the summer, we spent a lot of time restructuring the business, but also most activity was online. We realized very quickly that a lot of the online elements were successful in March and April. After that collectors and professionals became completely snow blinded by Zoom. The team was crushed actually by the overwork of going digital. We had to get rid of muscle memories of art fairs; scheduling and structure went out of the window. Every day became a problem solving day, you’re not finding solutions you’re sorting out problems. It’s not a way to move forward it’s a way to tread water. That element of the surreal nature was heartbreaking, because you see things you had built for 3-4 years literally put on hold, but what came out of that was positive. For Dominique (Lévy, ed.) and I, 2021 is about moving forward.

“In Palm Beach, the opening Saturday, I saw more people in one day and had more enriching conversations than a whole year in New York.”

Lévy Gorvy has taken on pop-up galleries in Aspen and Palm Beach, could you talk a little bit about this approach?
B.G. We took that decision with that mentality of moving forward. The areas we found incredibly invigorating to see in Paris, for instance, when we opened Horizons, was that the community was incredibly appreciative of an exhibition. The one thing missing sorely in the art world is community. A zoom conversation is fine on a one-to-one basis but as soon as you introduce more people to the conversation, it becomes very difficult to share ideas. It’s the same thing with clients, it’s very difficult to fall in love virtually or even to make a new relationship over zoom. We’re trying to make a new reality of the art world with the technology we’re dealing with. It’s been very interesting to see how many people have moved to Florida. In Palm Beach, the opening Saturday, I saw more people in one day and had more enriching conversations than a whole year in New York.

As a company looking at projects this year, we have a platform and how do we invite other galleries who don’t necessarily have that platform, but have access to something else: to artists, content. For instance, in Palm Beach, we’ve collaborated with Mitchell–Innes and Nash. We were able to put on a beautiful exhibition of Eddie Martinez sculptures. We don’t represent this artist but we represent the collectors who are interested in these artists. That ability to work with another gallery, and similarly the relationship we’ve kept with auction houses, is very important.

From your collaboration with Eddie Martinez, how do you look at artist representations going forward?
B.G. It’s a reality that artists today are becoming more and more disenchanted by the notion of single representation. Now you have the new reality of the market, the mega-gallery they represent the biggest entity, if you look at the announcements that were made even during the lockdown, there was almost an announcement a week about an artist moving from one gallery to another. That highly competitive environment is not a pleasant environment to be part of. If you’re always trying to defend yourself, you can’t be strategic. We’re much more interested in the conversation of yes versus no. We’ve seen the factor that artists are really interesting in exciting projects, first and foremost. Like Cecily Brown at Blenheim, fantastic project, obviously the galleries were involved but it was done by someone who is curatorial first and foremost. We’ve seen artists are responding to this time: this freedom of isolation, that notion of being able to really concentrate on what is essential is something we're very interested in being part of.

How do you feel the nature of looking at and buying art has changed for the dealer-collector relationship?
B.G. I have these three mantras—platform, content and trigger. If you have the notion of competition, at a certain time, you have to make a decision, either someone else is going to buy the work or it will go unsold. The difficulty of being a gallerist today is how do you get art in front of people, how do you get someone to fall in love? There’s a measured approach to dating–slow-dating, you put that in the art world, the last thing you need is a measured approach. It could take weeks and months to get the painting in front of someone, and then there’s no pressure for them to make a decision. The art fair allows for that trigger, you’re creating a public environment. We’re bringing art to the community and to collectors. It’s also about working out within that environment what ultimately is going to make that decision. You don’t want to send art unless you know you’re going to find a buyer. We understood from last year that video was the only way you could truly understand the objects. It was a way of being physical with art but actually it was the way of engaging clients. I had the camera person following from behind, it was about staging a way for people to really understand what a work of art is in a completely virtual way.

We’ve talked a lot about changing strategies to sell online, as a collector as well as a dealer. Do you buy online yourself?
B.G. Yes, I’m fortunate that I have a wife who’s as much a part of our collecting. We’ve bought a lot of things online, we generally do this when we have a trusted person on the other end. One of the best buys we’ve ever done, scared me to death until it arrived was a Christopher Wool coming up for sale in Wright auction in Chicago. Wright auction is known as a phenomenal decorative arts specialist, so to have a Christopher Wool work on paper, was unknown. They got it from someone who had worked with Wool; it had a ridiculously low estimate. I’d called the auction house, asked the guy to give me the exact details, the experience we have you know what to ask. I was sitting in a restaurant, bidding, and buying this thing at a price that was inconceivable and then being terrified. I paid immediately because I wanted to see it, everyone who found out I bought the piece was incredibly jealous.

The FIAC Online Viewing Rooms
Newsfeed
See all news
Huge Dig for Roman Riches Has Begun in Britain
Art Basel Miami Beach Returns Tomorrow
New Record for Western Work Sold in China
Bienvenue Art Fair to Open on December 15th in Paris' St Germain Neighborhood
Not to be missed
Interviews
Amin Jaffer: Curator of the Al Thani Collecti…
The delights of the fabulous collection of Sheikh Hamad Bin Abdullah…
Interviews
Françoise Gilot, Life Story of an Artist and a…
On the eve of her 100th birthday, Paloma and Claude Picasso’s mother…
Interviews
Caroline Jollès, Patron of Design
In 2011, Caroline Jollès, who is very involved with the Quai Branly…
Interviews
Sebastião Salgado: "Photography Has Been a Way…
In a career spanning nearly five decades, Sebastião Salgado has…