The 86 views of Italy that Auguste Jean-Baptiste Vinchon painted between 1816 and 1818 offer a unique glimpse of a rare studio collection. 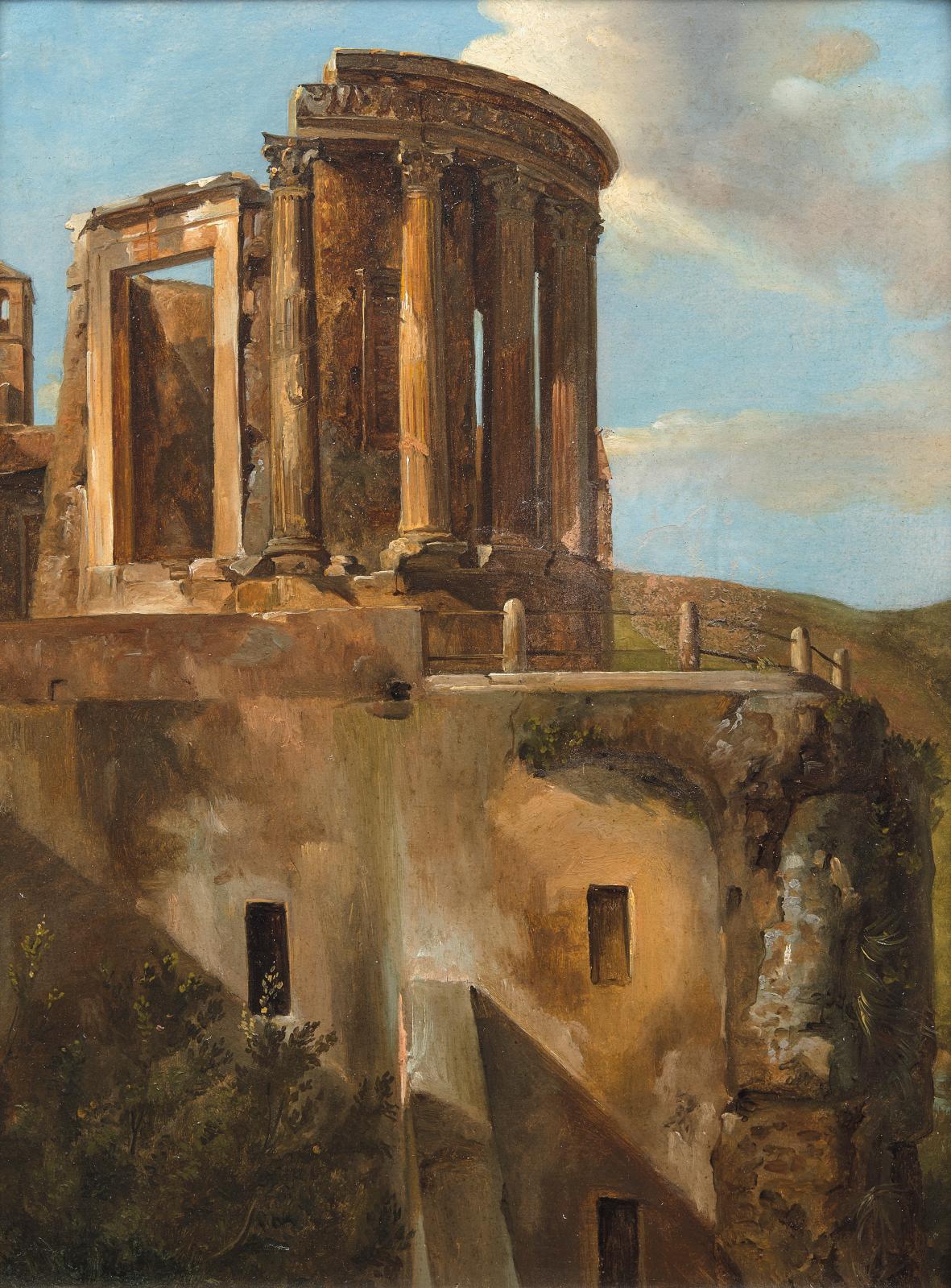 Some sales catalogs become part of art history bibliographies. The one for a July 3 sale in Amboise is sure to be kept by specialists and landscape painting enthusiasts. It will be essential for any art historian who studies Auguste Jean-Baptiste Vinchon's body of work. A pupil of Giuseppe Serangeli, who had trained with French painter Jacques-Louis David (1748-1825), he joined the latter’s studio in turn. Vinchon won the 1814 Grand Prix de Rome and from 1816 to 1818 was a resident at the Académie de France, then headed by Théven, in the Eternal City. Back in Paris, and until his death in 1855, Vinchon enjoyed a successful career as a history painter, focusing on both major official projects and portrait commissions. His heirs kept his studio contents for 150 years. In 1922 and 1926, his daughter-in-law donated some of them to the Musée des Beaux-Arts in Tours, which in 1999 received nearly 2,000 further drawings by the artist, as well as his diary and various manuscript documents. In 1998 in Tours, the family sold works by Vinchon’s friends as well as their ancestor’s portraits of relatives, sketches, some of his Italian works, including Le Peintre dans sa chambre à la villa Médicis (The Painter in His Room at the Villa Medici) and almost 30 landscapes mounted lengthwise in four panels. This little-known facet of Vinchon’s work has earned him a place in the history of open-air painting. The four new panels here are much more imposing. Two of them include 19 studies, the other two 24, including one by Léopold Leprince. Their reappearance is a real event.

Memories of the Villa Medici
This body of work is the travel album of a 27-year-old driven by the desire to record everything he discovered and experienced. In his first letter to his father from Rome, Michel-Martin Drölling, who left the Académie de France two months after Vinchon's arrival, spoke of the delight of his arrival at the Villa Medici: “I am writing to you from paradise because I do not think there is a more beautiful place in the world than the land around Rome. There are no words to express my admiration. At first, I thought I was dreaming and it seemed to me that all the beautiful things I beheld would disappear like a dream, but the more I am immersed in the reality, the more my admiration grows.” The arrival in Rome of the two young men—who trained in David's studio, where a stay in Italy was considered a must—changed their lives. Drölling spoke of "joy" and "delirium". "I was crying,” he wrote. “I was stamping my feet. I felt as if I had gone mad. It was one of the most beautiful moments of my life.” Meanwhile, Vinchon was fascinated by the Villa Medici and his accommodations. He also enjoyed the spirit of friendly competition with his fellow students. The same view of the Spanish Steps was painted by Léon Cogniet in 1817 (Cleveland, Cleveland Museum of Art) and by Jean Alaud, who produced L’Atelier de Picot (Picot’s Studio, private collection) and Léon Pallière dans sa chambre à la villa Médicis (Léon Pallière in His Room at the Villa Medici, New York, Metropolitan Museum of Art). Pallière left the Académie de France in 1816, Picot the following year. The Villa’s gardens appear in the panels several times. His depiction of the loggia, where a young man is drawing, is a key document for the collections’ history because views taking in the entire space were rare for the time. Like his peers, Vinchon depicted Roman antiquities as well as scenes of the surrounding countryside. The Temple of Vesta in Tivoli is a recurring theme in art history, and Vinchon’s work was no exception. Traveling to Naples, Capri and Ischia, he went as far east as Subiaco without stopping at Genazzano or the Castelli Romani. On the way there and back, he painted a number of landscapes, but his most interesting works are perhaps the simple, avidly sketched studies of trees. His pleasure and sense of freedom working in the open air are obvious in all these briskly drawn works.

True to Nature
The four panels featured in last winter’s "True to Nature" show at the Custodia Foundation, where Louise-Joséphine Sarazin de Belmont’s Vue des Pyrénées (private collection), a group of nine studies, was displayed in a similar frame. Not every artist exhibited was a landscape painter, but all the works were eminently intimist. The artists all express their excitement and wonder at painting rapidly in the open air. All of Vinchon's studies convey a sense of fleeting happiness and the fear of forgetting, or at least of never experiencing these precious moments again. As Vinchon was beginning to find his feet at the Villa Medici, Drölling was mourning his departure. “I am leaving this beautiful country, which I may never see again,” he wrote. “The thought of it makes my tears flow. Farewell, beautiful Italy! Farewell heavenly stay that gave me peace and happiness!”

Jean-Baptiste Pillement: Poetry and a Change of Scene

Raden Saleh: A Dialogue Between East and West

Turpin de Crissé’s Dream of Antiquity
Newsfeed
See all news
We Are on Break for Our Annual Summer Hiatus - Back in August! Happy Summer
A Michelin Star for the Museum of Modern Art in Fontevraud
World Record for the French-Danish Painter Gerda Wegener
Canadian Indigenous Groups Ask Vatican to Return Cultural Artifacts
Not to be missed
Spotlight