It took a hundred long years before the basilica of Montmartre was classified as a French historic monument, but the hour of recognition has finally come. 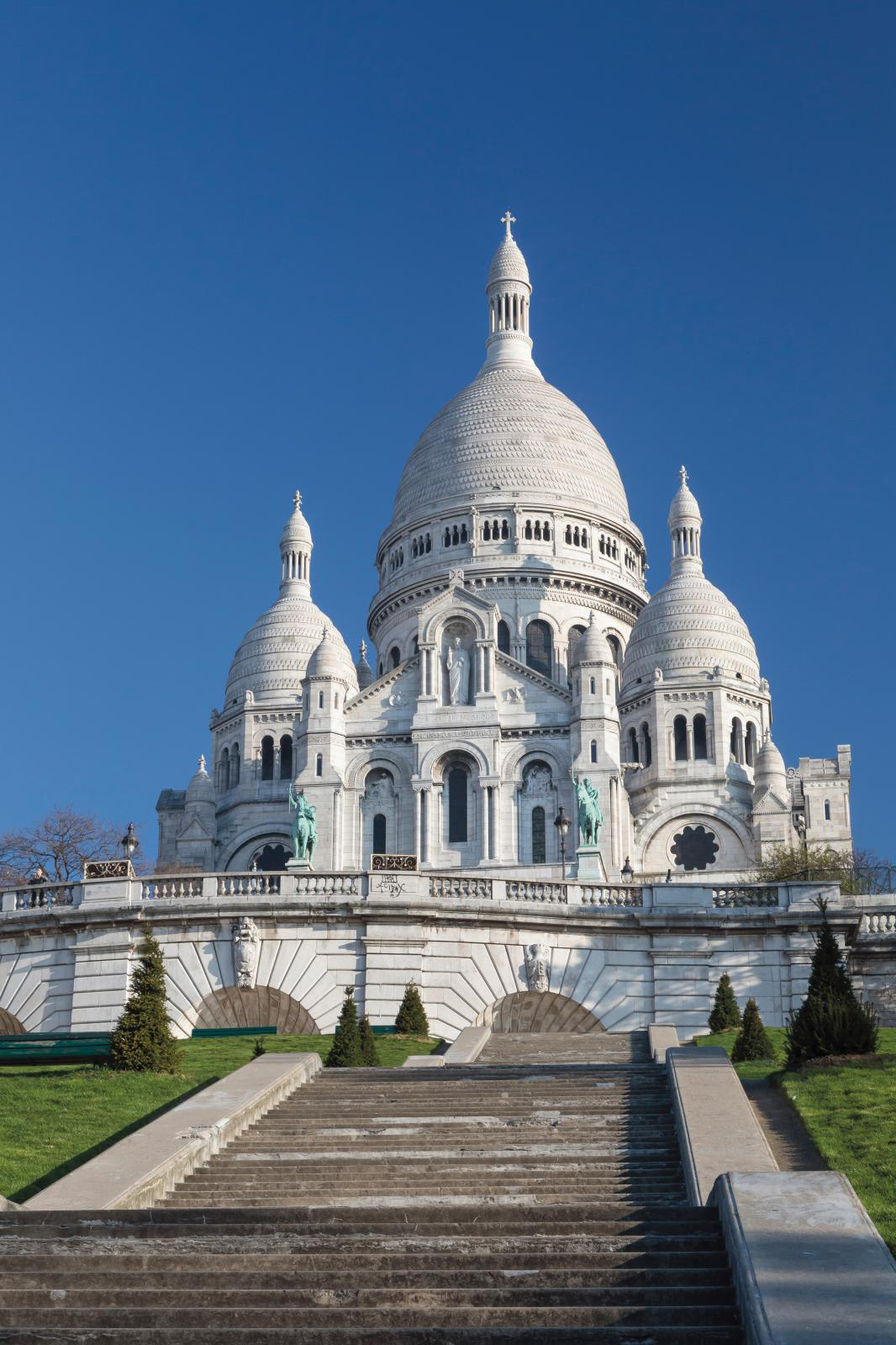 It has long suffered from a form of disrepute, with a silhouette considered too massive, heavy and bloated, earning it unflattering nicknames like "cream puff" and "meringue of the Butte". The Sacré-Coeur Basilica has had an eventful history, like France itself. Incredible as it may seem, this monument, though symbolic of the capital city and its second-most visited site after the cathedral of Notre-Dame (with eleven million visitors per year) was not registered as a French historic monument until very recently.

One hundred and one years to the month after its consecration, the hour of recognition finally arrived: on October 13, 2020, the Regional Commission for Cultural Heritage and Architecture unanimously approved the basilica's inclusion in the register of historic monuments in France. It was vital to "give this building the consideration it deserves for its architectural quality," said Laurent Roturier, director of cultural affairs for the Ile-de-France region. This operation was part of a more general campaign conducted over the past eight years by the DRAC (Regional Cultural Affairs Directorate), in partnership with the City of Paris, leading to the protection of eighteen Parisian churches.

The decision in favor of the Sacré-Coeur was largely supported by the State. Minister of Culture Roselyne Bachelot said this was only a "first step towards its listing." The next commission will need to assess the building's national influence—which seems firmly established. This listing as a French historic monument is synonymous with protection: any alterations will now be subject to the scrutiny of public authorities and must be carried out by a chief architect of historic monuments or a heritage architect. It also makes the building eligible for national subsidies.

A Symbolic Position
It is somewhat curious that it has taken so long for this building to be listed, given that it attracts tourists from all over the world. "It demonstrates the slow recognition of 19th-century architecture," says Laurent Roturier. But there are other reasons too, like "contempt for major churches demonstrating re-Christianization," according to historian Alexandre Gady. Aesthetic appreciation does not come into play in regards to approval: listing acknowledges the value of architecture that deserves to be protected. "It is assessed in terms of its contribution to art and history," says Antoine-Marie Préaut, head of the regional department for the conservation of French historic monuments. He and his team listed all the arguments in favor of this distinction: the originality of the style, now seen as a kind of manifesto for neo-medieval eclecticism in religious monuments in the first half of the 20th century; the variety and quality of the architecture, recognized by all specialists, and the number of artists involved (nearly sixty), who were influenced by the development of various artistic movements, rather like the Sagrada Família in Barcelona. "So not only the building as a whole was chosen, but also its symbolic position on a hill and the gardens surrounding it, which all contribute to its importance," says Laurent Roturier. As well as the artistic aspect, the monument clearly has deep historic value, as it arose from a national desire and was financed by an unprecedented number of donations.

The Largest-Ever National Funding Operation
The project was initiated by two upper-class brothers-in-law, Alexandre Legentil and Hubert Rohault de Fleury. In 1870, they made a vow: to build a sanctuary dedicated to the Sacred Heart of Jesus to protect France in the wake of its devastating defeat by Prussia in the Franco-Prussian War (1870-1871) and to liberate Pope Pius IX, "The Prisoner of the Vatican" (an issue concerning the Papal States). The text of this national vow is engraved on a marble plaque in the building. The two men's appeal soon gained support from the political world and the Church. Various options were considered for the site. Then in 1872, the Archbishop of Paris, Monsignor Joseph-Hippolyte Guibert, visited the hill of Montmartre and was struck by the beauty of the site at sunrise: "This is where the martyrs are; this is where the Sacred Heart should reign [...]. This monument should arise from the blood of our first apostles, at the top of the hill where Christianity was born among us."  For this hill was where the first bishop of Paris, Saint Denis, was put to death with his companions in the 3rd century. Legend has it that the Saint picked up his head, washed it in a fountain and continued on his way to the present-day city of Saint Denis. The place then took on the name of "mons Martyrum"—the "Martyrs' mount"—and became a place of pilgrimage.

On July 25, 1873, the French National Assembly passed a special law declaring the project one of public utility. It was financed by the generosity of the faithful. "It inspired an unprecedented spiritual and material impetus, with ten million donors, 80% from secular society," says the basilica's rector, Father Stéphane Esclef. Their initials and sometimes their full names were engraved on various stones inside the building. With some 46 million French francs collected over nearly fifty years, it was the largest-scale national funding operation of the 19th century.

In 1874, architect Paul Abadie was chosen from among the eighty-seven entries in the public competition for the architectural project. The first stone was laid on June 16, 1875. After his death in 1884, six other architects worked on completing the construction in turn. Topped by five domes that give it the appearance of a central plan, the nave was built in 1881 and the façades were finished nearly ten years later. The building was inaugurated on June 5, 1891, by Mgr Richard, Cardinal-Archbishop of Paris, and consecrated in October 1919, but only finally completed in 1935.

Remarkable Whiteness
The monument is an imposing 91 meters/298.5 feet high and 85 meters/278.8 feet long. Designed by Paul Abadie (1812-1884) in a Romanesque-Byzantine style, it has a striking silhouette with its series of domes and is reminiscent of Hagia Sophia in Istanbul. Inside, the decorative elements are unevenly distributed, as various donations made them possible, from the walls to the stained glass windows, the organ (a listed French historic monument) and the lantern tower inspired by the one in St. Peter's, Rome. But what chiefly catches the eye is the spectacular composition overlooking the altar. Measuring 500 m2/5381.9 ft2 and weighing sixty-six tons, this mosaic by Luc-Olivier Merson (1846-1920), completed in 1923, is one of the largest in the world. Designed just after the rediscovery of the technique and its application to large public buildings (the first was the Opera Garnier), it shows a Christ with outstretched arms displaying a golden heart.

"The time was ripe not for cathedrals, but for this basilica!" says Laurent Roturier. It owes its unique and remarkable whiteness to the stone chosen by the original architect from the Château-Landon quarries: the same used for the Arc de Triomphe and the Pont Alexandre-III. It has the particular feature of being "self-cleaning", jokes the rector of the basilica, because it regenerates and whitens with rainwater. And its radiant visibility makes it shine out over the entire capital and beyond.

Under the Floral Spell: Art, Architecture and Roses at Bagatelle
Newsfeed
See all news
Is Afghanistan's Art Safe Under the Taliban?
Samsung Signs Partnership with Louvre
Newly Discovered Van Gogh Sketch Authenticated
Ancient Handprints Found in Tibet: the Oldest-Known Art?
Not to be missed
Cultural Heritage
An Architectural Gem: The Birth of Saint-Quentin's Palais…
A history impregnated with the industrial spirit of the 19th century,…
Cultural Heritage
From Caesar to LUMA: Arles, a City of Art and Culture…
Situated on the banks of the Rhone the provençal city of Arles has…
Cultural Heritage
Under the Floral Spell: Art, Architecture and Roses at…
Every year the gardens of Bagatelle, in Paris, attract rose gardeners…
Cultural Heritage
Villa E 1027: Eileen Gray's Masterpiece Rises from the…
The architectural masterpiece designed by Eileen Gray in Roquebrune-Cap-Martin…