This summer, the Factory's demiurge arrives at La Croisette with two series of silkscreens from 1983, including these mischievous monkeys, looking ready win the prize. 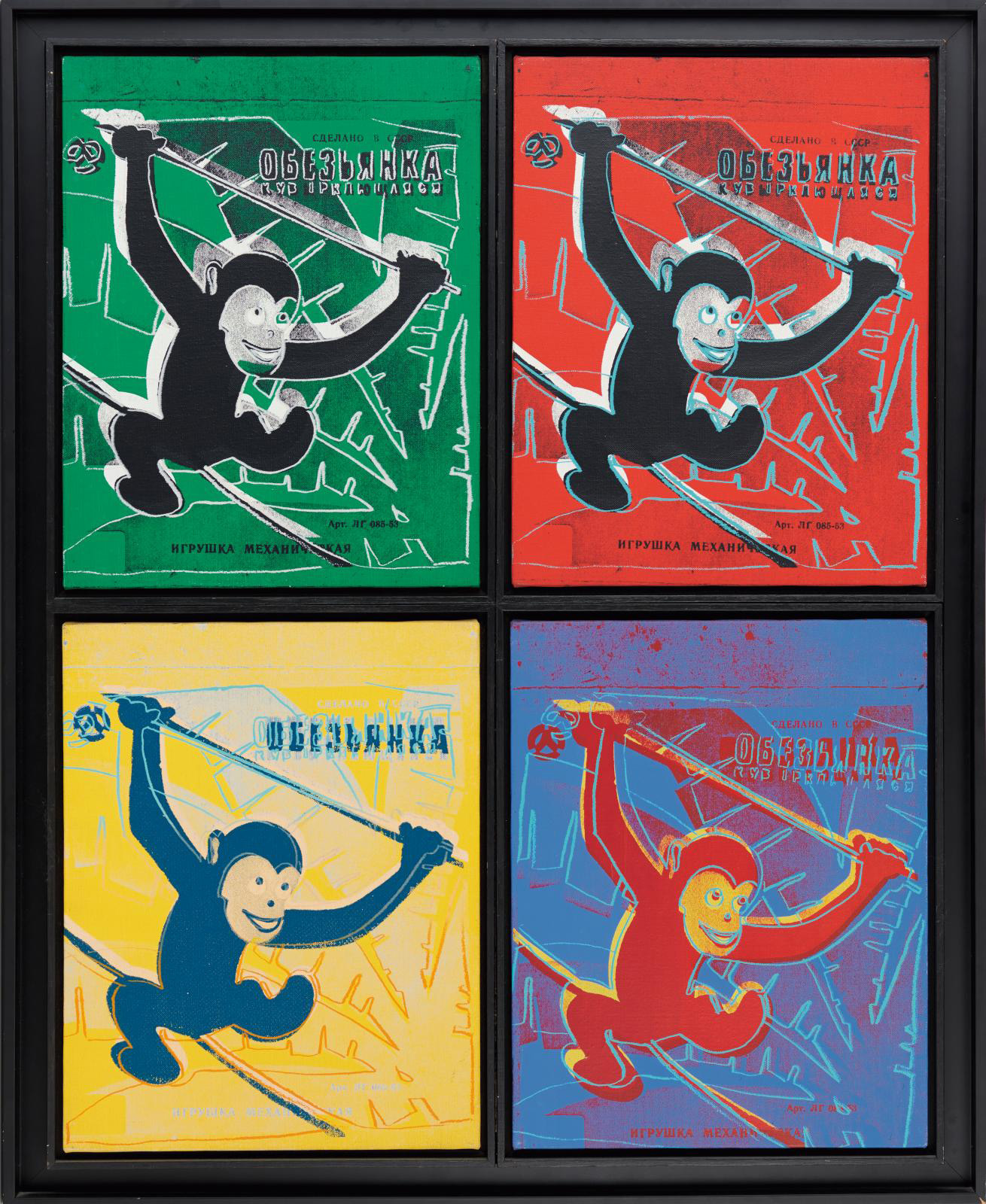 Like all the series that made Andy Warhol's work famous, Monkey (Toy Painting) features a single image, here in versions of four identical chimpanzees. The dominant color changes, giving each its official title: Monkey/Green, Monkey/Yellow, Monkey/Orange and Monkey/Blue. A mysterious typography in Cyrillic characters accompanies the animals, as we are seeing the reproduction of a box for a Russian toy: this famous little monkey. Cuddly toy or automaton? We will never know. But what is certain is that these four silkscreen and acrylic paintings, assembled in the same frame at an unknown date, are part of a series by the New York artist entitled "Toy Painting" from 1983. That year, Warhol presented this playful group in Europe, at an exhibition in Zurich staged at the home of the owner of his Swiss gallery, his close friend Bruno Bischofberger. Since 1966, when they first met in New York, Bischofberger had maintained close ties with Warhol, who granted him the right of first refusal for all future works after 1968: an agreement maintained until the artist's death. And in 1969, when Warhol launched his magazine Interview, Bischofberger was his leading patron.

“Art for Children" of All Ages
In Zurich in 1983, the exhibition was not an ordinary show, but a visual performance with the revealing title "Art for children". Once again, Warhol surprised viewers by lining up his colorful "Toy Paintings" at child's eye level. They were presented on a wallpaper background called Fish Wallpaper, with fish motifs in black and silver, which completely covered the walls. Here, visitors could see dozens of acrylic-painted silkscreens, for which the artist drew themes from his collection of vintage windup tin toys. He was above all inspired by their packaging, with visuals that were as kitschy as the objects, that came from all over the world: Japan, the US, China, Hungary, Germany and Russia. They included representations of an Airplane, a Spaceship, the Panda Drummer Alarm Clock and the Lunar Explorer.

At the Cannes auction, a second example will also be up for sale: Roll Over Mouse, presented as a set of four acrylic and silkscreens on canvas, identical in size, also signed and dated "Andy Warhol 83" and assembled in a single frame (€500,000/600,000). From the same collection as the monkeys here, it took a similar route, starting at the Bischofberger Gallery (whose label it bears) in 1983, then passing through the Beaubourg Gallery in Paris, where its last owner bought it on November 21, 1987.