For the first time in the UK, the Barbican Centre in London presents a groundbreaking survey exhibition of the American artist Carolee Schneemann (1939-2019). 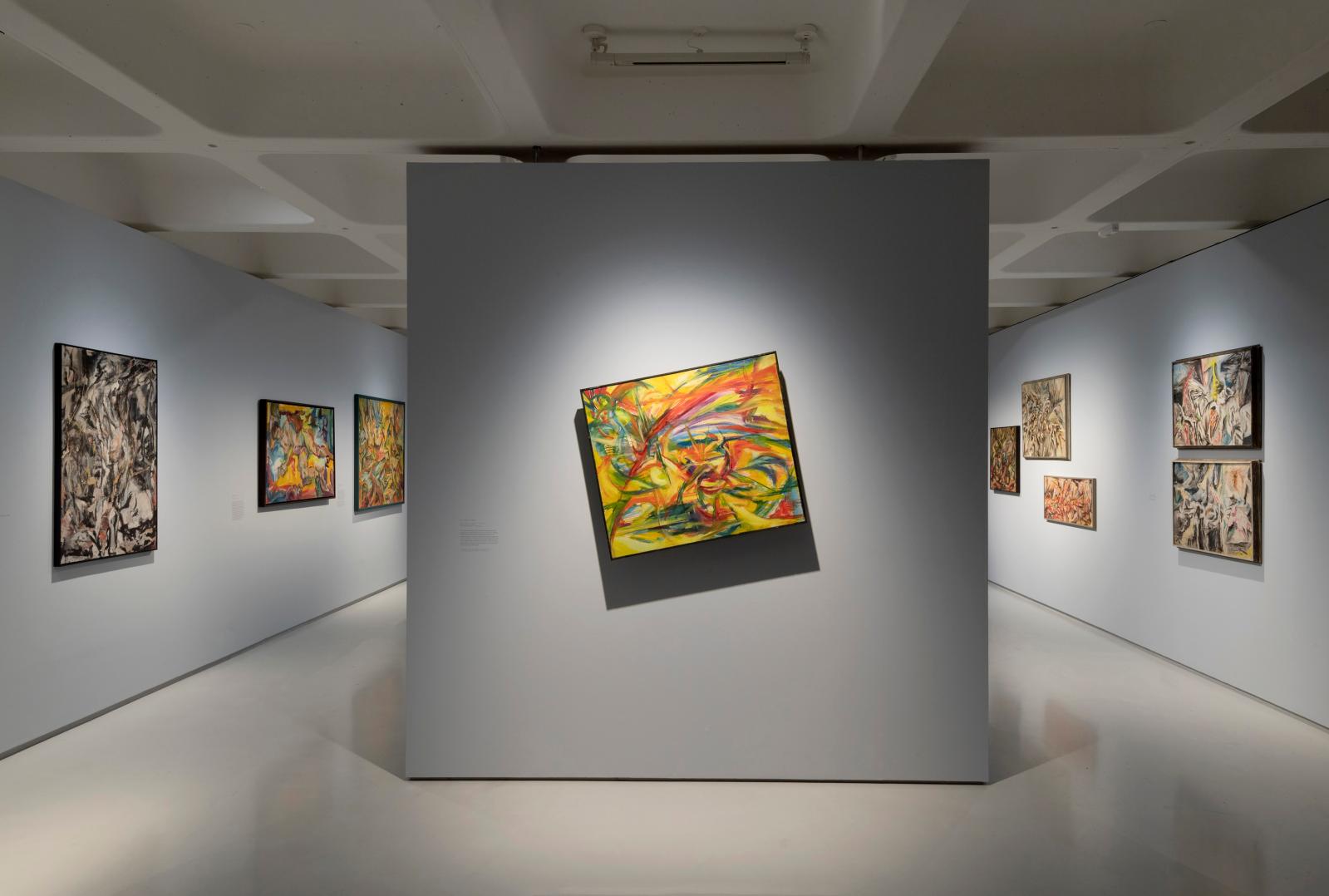 Carolee Schneemann cemented her rightful place in art history with her eponymous live performances of works such as Meat Joy (1964) and Interior Scroll (1975), but she maintained that she was first and foremost a painter. “I am a painter. I’m still a painter and I will die a painter.” This excellent retrospective curated by Lotte Johnson charts not only her career as the passionate feminist performer but also celebrates the painterly spirit that remained a constant throughout her vibrant and radical life. Featuring over 300 works across 15 rooms, and charting six decades of her career, this is an extensive and ambitious show that does not fail to impress.

Kicked out of Bard College in 1954 for painting her own body in lieu of having live models to paint from, her rebellious spirit infuses the entire exhibition. In the wake of the Abstract Expressionist all-boys club, Schneemann took “action painting” literally in her kinetic paintings: Pinwheel (1957), painted on a potter’s wheel, is the first work in the show; hanging at an angle, the painting is rotated for visitors, bringing her brushstrokes to life. Initially mistaking Paul Cézanne for a woman because of the “anne” in his name, his construction of space within the painted image inspired her to conceive of “the act of painting in space” beyond two-dimensional limits, transforming painting into an event.

From painting to collage to assemblage, the first few rooms reveal Schneemann climbing out of a two-dimensional space toward increasing physical interaction with the viewer. This is brilliantly exemplified by the assemblage boxes inspired by her friendship with Joseph Cornell (1903-1972). Her dollhouses come alive with music, electrical lights, motorized elements, and shards of broken mirrors and glass. She damaged the boxes with her “Controlled Burning” process, which involved her setting their contents alight and then re-opening them to reveal exploded interiors. This attack on the constraints of the visual remains a dominant approach throughout the exhibition. In Fuses (1964-65), the spliced footage of her and her partner James Tenney (1934-2006) having sex runs on a film reel that she layered, cut, baked, painted over, dipped in acid, and exposed to weather elements, using collage to limit the viewer’s access to her body and the sex acts. In a rare film of sex from a woman’s perspective, the work becomes more about her technique of image-making rather than purely overt eroticism.

Want to receive news and updates about auctions?
Sign up for our newsletter
The show ends with her film Precarious (2009) and the soundtrack of Marvin Gaye’s “Sexual Healing,” immersing the visitor completely in her moving images. The work is projected through shifting glass slides, which paint you and the walls with light. After half a century, her brushstrokes have completely escaped the boundaries of the painted image, and the viewer is paradoxically both liberated by the joy of the music yet confronted by the affective footage of animals in captivity. This call to arms against injustice through a playful yet sincere lens echoes her artistic commentaries on the Vietnam War, the Civil War in Lebanon, the Bosnian War, and the 9/11 Terrorist attacks in New York. “The personal is political” runs through most of the works on the ground floor of the exhibition space, addressing the anonymity facilitated by mass media footage of macho violence in war.


In her lifetime, Schneemann was very conscious to document her performances in order to leave her mark concretely in art history. Asking “can I be both image and image-maker?”, she subverted women’s troubled position in the art world. Eye Body: 36 Transformative Actions for Camera (1963) was a turning point for her, insisting on the equal treatment of her body as both subject and artist. With her “missing precedents”, she tracked the missing artifacts and images made by women in art history and called out the exclusion of women’s creative and sexual expression. The empty harness and gestural strokes from her performance Up to and Including Her Limits (c. 1970-1973) are a haunting reminder of Schneemann’s vivacious and insistent mark-making both artistically and on society at large. This brilliantly paced and thoughtful exhibition ensures that Schneemann’s mastery of performance and painterly vision remains both in our minds and the annals of art history long after we leave the exhibition.

Raphael “The Universal Artist” at The National Gallery, London
Not to be missed
Exhibitions