His third eye watched over this statuette of Panjarnata Mahakala, cast in Tibet in the early 16th century. 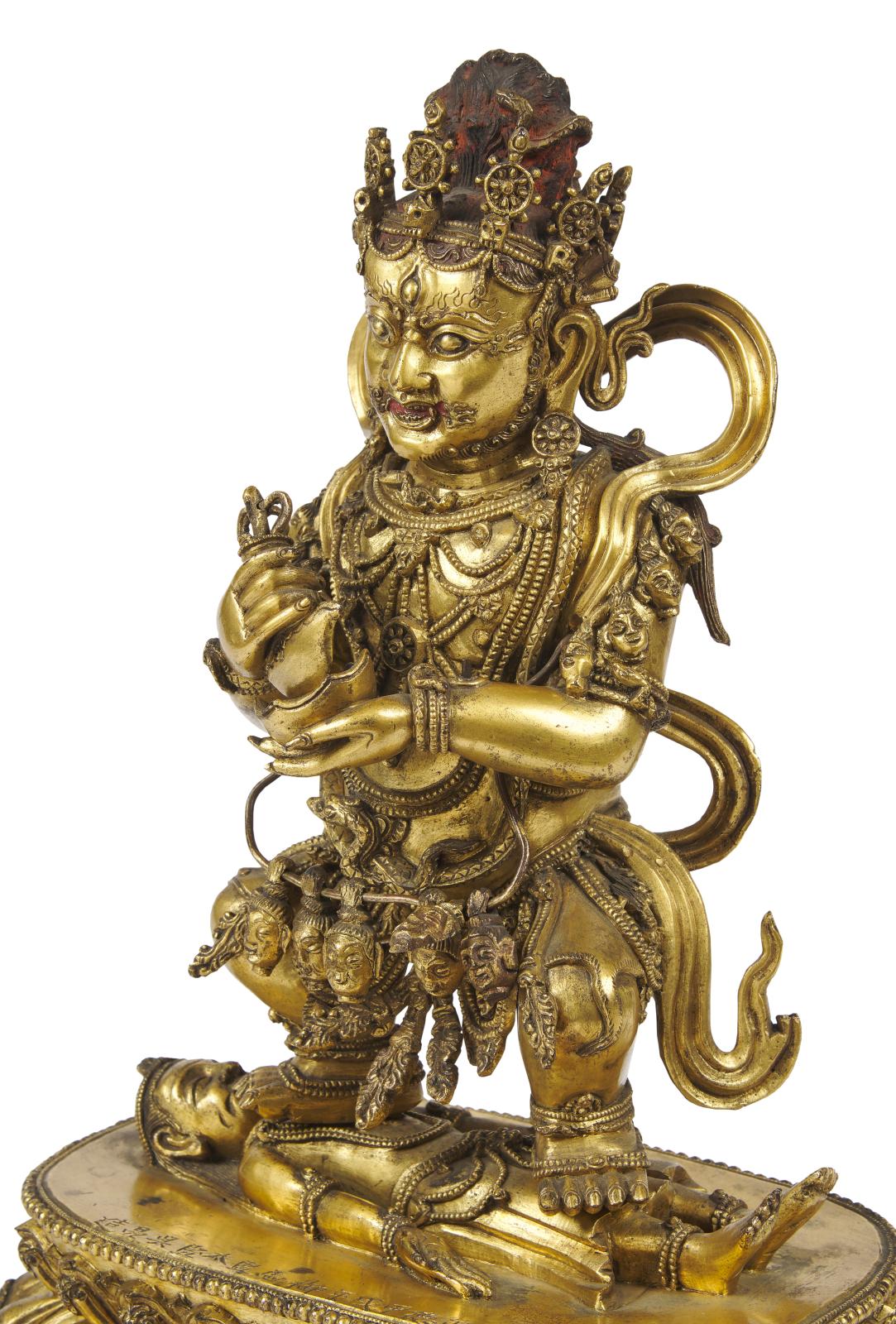 Tibet, Zhengde period (1506-1521), gilt bronze statuette of Panjarnata Mahakala standing on a demon stretched out on a base in the shape of an inverted double lotus, holding the kattrka and the kapala, adorned with jewels, demon's heads and entwined serpents, forehead ornamented with a third eye, crown with the wheels of the law, a snake in his hair, mark of doubtful authenticity: "Da Ming Zhengde Jiaxunian Yumajian Taijian Wuliang zao", h. 30.5 cm.
Result: €819,000

With a result of €819,000, this Tibetan bronze recorded the second highest bid at Drouot during this Asian fortnight. It paid tribute to a gilt bronze statuette cast during the reign of the Ming emperor Zhengde (1506-1521), depicting the guardian Mahakala vanquishing a demon, on which he is standing. He is shown in his protective form of Panjarnata, also known as the "Great Black Lord of the Pavilion". His appearance is frightening, with an undulating snake in his hair, fangs in his mouth (deliberately shown open) and a third eye in the middle of his forehead, and he holds in his hands the kapala (a cup made from a human skull used in ceremonies). An inscription on the base tells us it was "made during the reign of Zhengde by the eunuch Wu Liang, who looked after the imperial horses". A decidedly inspired groom… Another bronze with a similar inscription, this time indicating the name of the eunuch Jiao Ning, is now in the Museum of Asian Art in San Francisco.

VENTE DESSINS & TABLEAUX ANCIENS - OBJETS D'ART & D'AMEUBLEMENT - ARTS ET PORCELAINES D'ASIE
Pescheteau-Badin
Info and sales conditions
Catalogue
Salerooms
Newsfeed
See all news
Frieze New York is Coming Back in May
Museums Permitted to Reopen in Six Italian Regions
A Mysterious Tanguy Work is Up for Auction
Stunning Discoveries in Saqqara
Not to be missed
Lots sold
A Masterpiece by an Apprentice
This type of strongbox was made by an apprentice seeking admittance…
Lots sold
Magritte High on the List
The Belgian master cultivated mystery, making play with different…
Lots sold
Martiros Saryan on Armenian Soil
A painting by Martiros Saryan resonates like a paean to a beloved…
Lots sold
Juan Gris, Trailblazer
This painting features all of the Cubist master’s qualities and…