In the Wake of Exotic Fish

A world tour with naval officer Duperrey and other seafarers who wrote travel books. 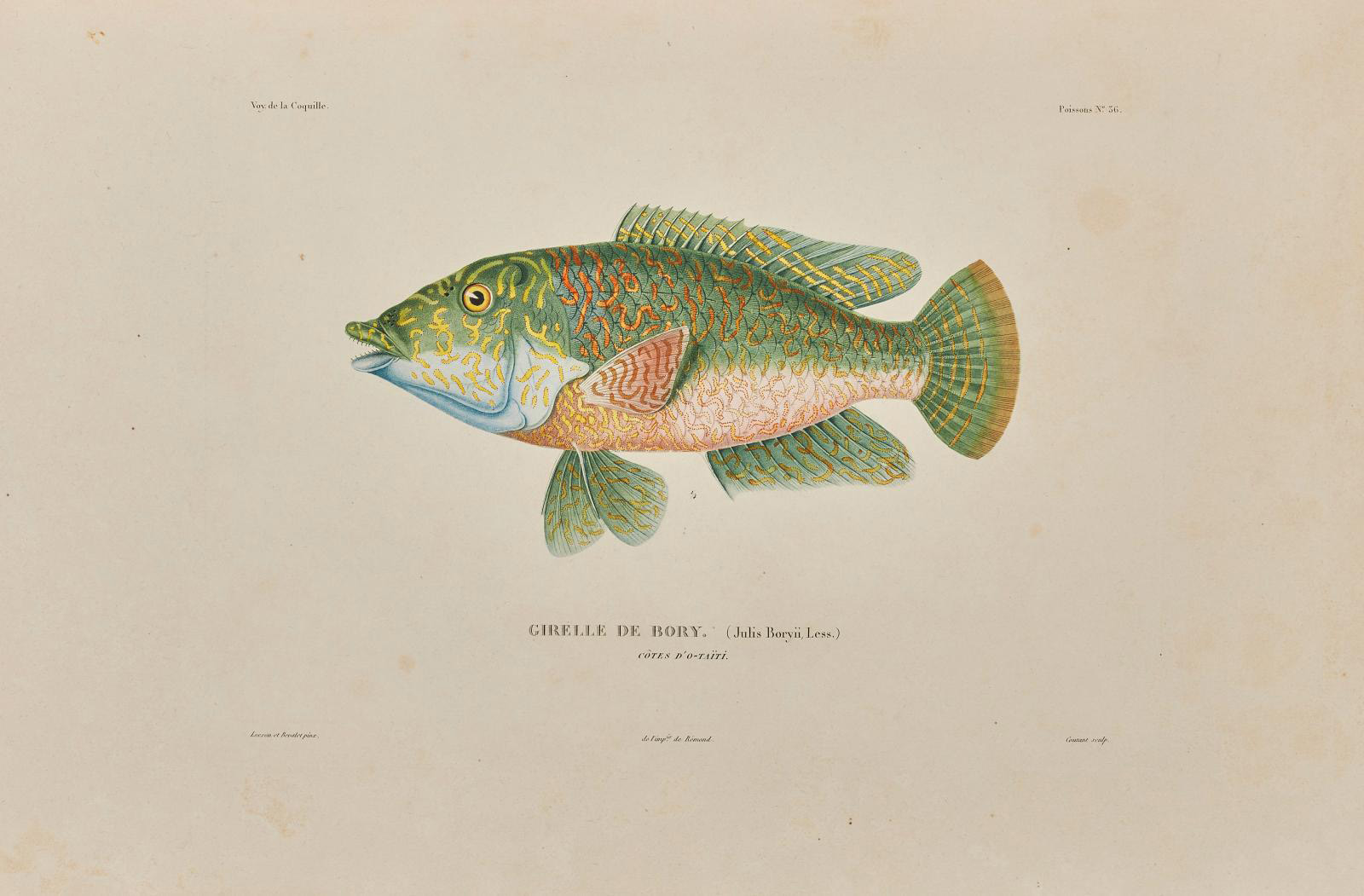 To finish the work he undertook on the Uranie between 1817 and 1820 as a naval hydrographer under Louis de Freycinet's command, Louis-Isidore Duperrey proposed a new scientific expedition. The officer boarded La Coquille in 1822, with Jules Dumont d'Urville as second in command, on a new three-year trip around the world. On August 11, he set sail from Toulon, France for Brazil, then traveled to the coasts of Chile, the Pacific Islands, New Guinea, New Zealand and the Moluccas. He published his writings when he returned. An 1826 first edition of this Voyage Around the World Carried out by Order of the King, on His Majesty's Corvette La Coquille..., a vitally important testimony, garnered €5,639.

This is a zoological atlas divided into eight parts (mammals, birds, reptiles, fish, mollusks, insects, crustaceans and zoophytes), with 157 plates engraved on metal by Tardieu and hand-colored after the drawings of two naturalists on board, René Primevère Lesson and Prosper Garnot. The even more famous Atlas of La Pérouse's Voyage Around the World, in a folio first edition of 1797 with its original board-binding, fetched €4,010.

WALKING IN THE TRAVELS - Books - Manuscripts - Photographs
Audap & Associés
Info and sales conditions
Catalogue
Salerooms
Newsfeed
See all news
The Villa Albertine Opens in New York
Colnaghi Gallery Prolongs Exhibition Exploring Connections between Spanish Art and the New World
Fine Arts Paris Announces its Dates and New Exhibitors
British Museum Will Sell 200 NFTS of Hokusai’s Works
Not to be missed
Lots sold
From the Living Room to the Bedroom: Cannes-Style El…
The sale of the entire stock of furniture from a château in the…
Lots sold
The Art of Fin-de-Siècle Jewelry
In Lyon, two imposing necklaces conjured up the balls and evening…
Lots sold
Impressive Dutch Style Marquetry and an 18th-Century…
In Lorraine, the contents of a very fine residence set off to new…
Lots sold
Valtat: The Virtuoso of Color
The painter, famous for his vivid landscapes, was celebrated through…