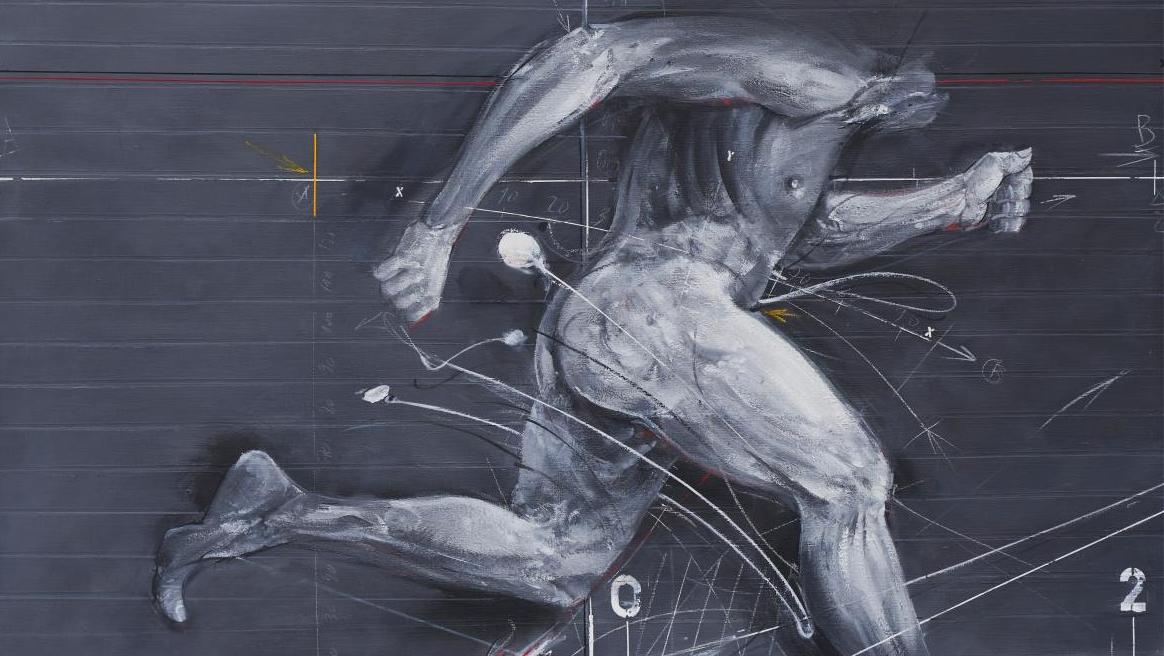 The number 13 brought good luck for the auction house, which continued its exploration of the multifaceted art of the 20th century in a sale held behind closed doors, this time focusing on the body and movement. Thirteen works at the beginning and multiple successes at the finish for Vladimir Velickovic (1935-2019), Dado (1933-2010), also born in the Yugoslavia of the inter-war years (in Montenegro) and the Argentinian artist Antonio Segui, now living in France (b. 1934). The triptych "Three states of the jump", created in 1975 and seemingly a tribute to the pioneering English photographer Eadweard Muybridge, hurtled breathlessly to a world record at €78,000: a feat that brought some welcome light into these dark times. The artist, a popular teacher at the Ecole Nationale Supérieure des Beaux-Arts de Paris, continued his exploration of the human body with a mixed media in ink, acrylic and collage on paper (157.5 x 118 cm, 62 x 46.4 in), which fetched €11,700, and an ink and pencil drawing of 1993 (same size) that went for €8,580. At the same time, "Blood Sweepers I" (146 x 114 cm, 57.4 x 44.8 in) by the enigmatic Dado, established itself in the landscape for €24,700. Meanwhile, Antonio Segui's work was also captured at full speed. His "Joggers", painted on canvas in 1978 (195 x 195 cm, 76.7 x 76.7in), came to a halt at €45,500. All these results prove, reassuringly, that the vital energy of art is still intact and that is reassuring.

Post War & Contemporary Art
www.drouotlive.com
Millon
Info and sales conditions
Catalogue
Results
Newsfeed
See all news
Due to the summer holidays there will be a pause in the newsfeed. We will be back Monday, August 24th. Have a wonderful summer vacation!
Met Museum in New York acquires Wangechi Mutu sculptures
US House of Representatives vote to create a national museum dedicated to Latin Americans
Church volunteer confesses to starting the Nantes Cathedral fire
Not to be missed
Lots sold
Portrait of a young follower of Winckelmann
Under the watchful eye of the master Johan Joachim Winckelmann,…
Lots sold
The Gospels according to Brueghel, and botany with B…
Three days of sales saw a parade of musical instruments by famous…
Lots sold
From the Marquesas Islands to Vanuatu, Oceanic arts were…
Artifacts with a mysterious purpose from these distant lands were…
Lots sold
Deeply inspired objects from Sèvres to Hadrian
A Sèvres Chinese service and the profile of Emperor Hadrian sculpted…