A rare work by a woman painter met with huge success in Troyes, France: a just reward for this Dutch still life virtuoso, adulated both then and now. 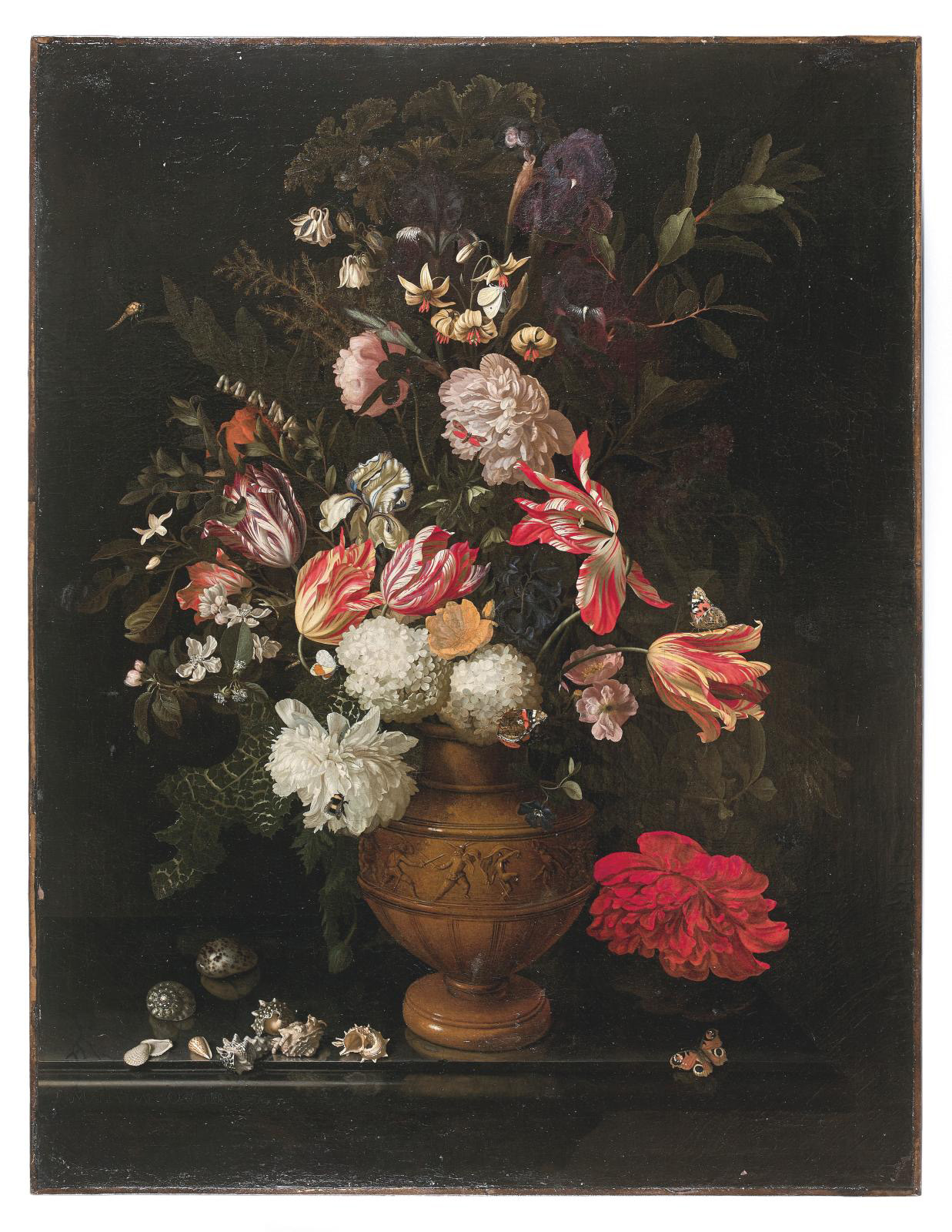 Her corpus is as small as Vermeer's, due to the meticulous care she lavished on each of her paintings and the vagaries of history, which led to the loss of many. Yet Maria Van Oosterwyck was not only one of the few female artists of her time in Amsterdam, but also one of the most highly acclaimed for her superb, realistic still lifes. Her patrons included Louis XIV, Austrian Emperor Leopold I and William III of England.

So it was no surprise that her Bouquet of Flowers in a Rhine Stoneware Vase on an Entablature with an Arrangement of Shells, from a property in Lorraine, multiplied its high estimate by six, rocketing to €806,000—finally carried off by a prominent European collector, who battled it out with eight other international bidders by phone. The signed painting also garnered the world's second-highest bid for the artist (source: Artnet).

The magnificent bouquet is certainly a splendid example of her celebrated virtuosity, bringing together flowers from every season: tulips, peonies, aquilegias, irises and viburnums. But the moral message is never far away with this pastor's daughter, whose still lifes can also be seen as vanitas paintings. The insects sipping nectar from the extravagantly blooming flowers speak of the passage of time, while the rare shells evoke the conceit of scientists eager to classify everything: an impossible task.

Furniture & Works of Art
Ivoire Troyes - Boisseau-Pomez
Info and sales conditions
Catalogue
Newsfeed
See all news
Largest Known Triceratops, “Big John”, Goes Up for Auction with Binoche & Giquello at Drouot
Italian Police Recover Nazi-Looted Drawings
Museum to Return Antiquities Implicated in Pandora Papers to Cambodia
A New Museum for Medieval Abbey of Saint-Gilles in the Gard, France
Not to be missed
Lots sold
Victor Hugo's Sun in the Clouds
La Maison de Victor Hugo in Paris preempted an ink drawing at the…
Lots sold
Master Clockmaker Charles Dutertre's Perfect Timing
Under the protection of Demeter and Persephone, a bronze clock by…
Lots sold
The Discreet Luxury of French Regional Silverware
With this second sale, the success of the highly original silverware…
Lots sold
Aristophil Collection Sale: Baudelaire Sharpens His …
At this new sale in the Aristophil collection series, the poet's…