Treasure of an Italian Collector

In the Ile Saint-Louis apartment of this Venetian collector, two objects evoke the turbulent history of the lagoon city, while the Dutch lifestyle blossomed on a painting by Hendrik Schook. 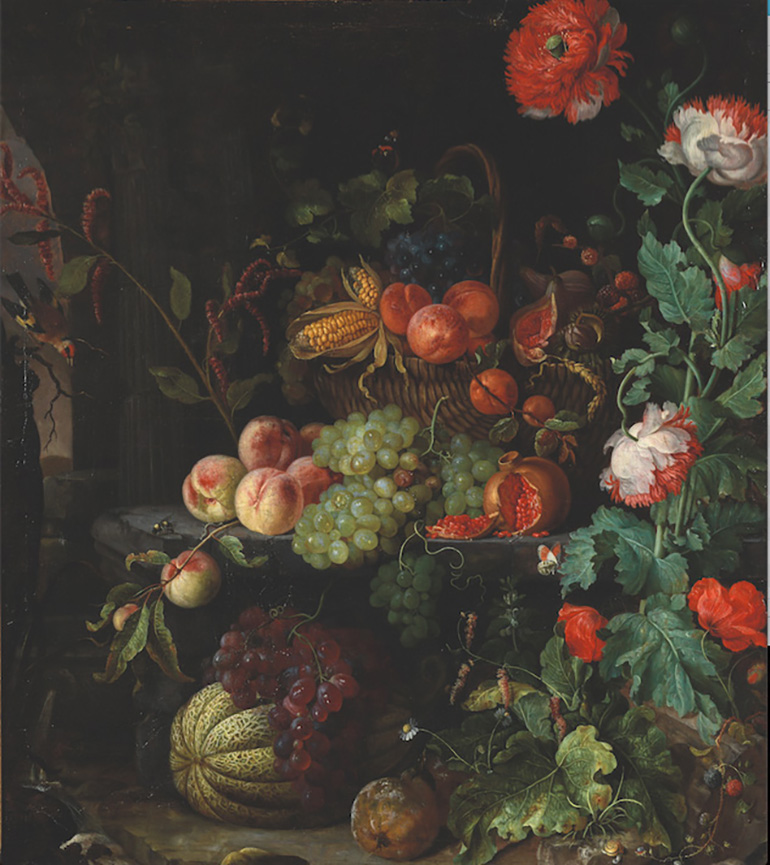 Echoing the origins of their owner, a set of five paintings by the Venetian School depicted The Order of St Stephen triumphing over the Turkish fleet (98.5 x 142 cm each). Once belonging to Charles de Beistegui's collection, the series expected to make some €20,000, but finally changed hands for €60,160. The more serene art of master glassmakers began to dazzle the world in the Middle Ages, achieving masterpieces during the Renaissance – on this occasion, an early 16th century pilgrim's flask (h. 31cm, 12.2in) in enamelled gilt blown crystal, with a decoration of engraved gold leaves and appliqué pastilles in red, green, blue and white. This rare piece from Murano (of which there are two similar versions in the Musée du Louvre in Paris and in the Cathedral of Sainte-Anne, in Apt) garnered €29,440. However, the real champion of the sale, which fetched €70,528, was the Utrecht-born Dutch artist Hendrik Schoock, with an impressively-sized oil on canvas, Still life with basket of fruit and flowers on an entablature (99.8 x 87 cm, 39.2 x 34.2 in). The painter, a pupil of Jan Lievens and Abraham Bloemaert, became highly popular for his skilful arrangements of orchard and garden produce, sometimes presented in the form of opulent garlands.

FURNITURE & ART OBJECTS
Orne Enchères
Info and sales conditions
Catalogue
Newsfeed
See all news
French Culture Budget Increases by 7.5 Percent
€840M Collected for the Reconstruction of Notre-Dame
FIAC Announces its Artistic Program
1:54 Contemporary African Art Fair, Ready for a 9th Edition
Not to be missed
Lots sold
From the Living Room to the Bedroom: Cannes-Style El…
The sale of the entire stock of furniture from a château in the…
Lots sold
The Art of Fin-de-Siècle Jewelry
In Lyon, two imposing necklaces conjured up the balls and evening…
Lots sold
Impressive Dutch Style Marquetry and an 18th-Century…
In Lorraine, the contents of a very fine residence set off to new…
Lots sold
Valtat: The Virtuoso of Color
The painter, famous for his vivid landscapes, was celebrated through…