At €1,963,000, the bid for this unique web-footed bird was the highest bid of the year at Drouot, yet again acclaiming the success—and talent—of François-Xavier Lalanne. 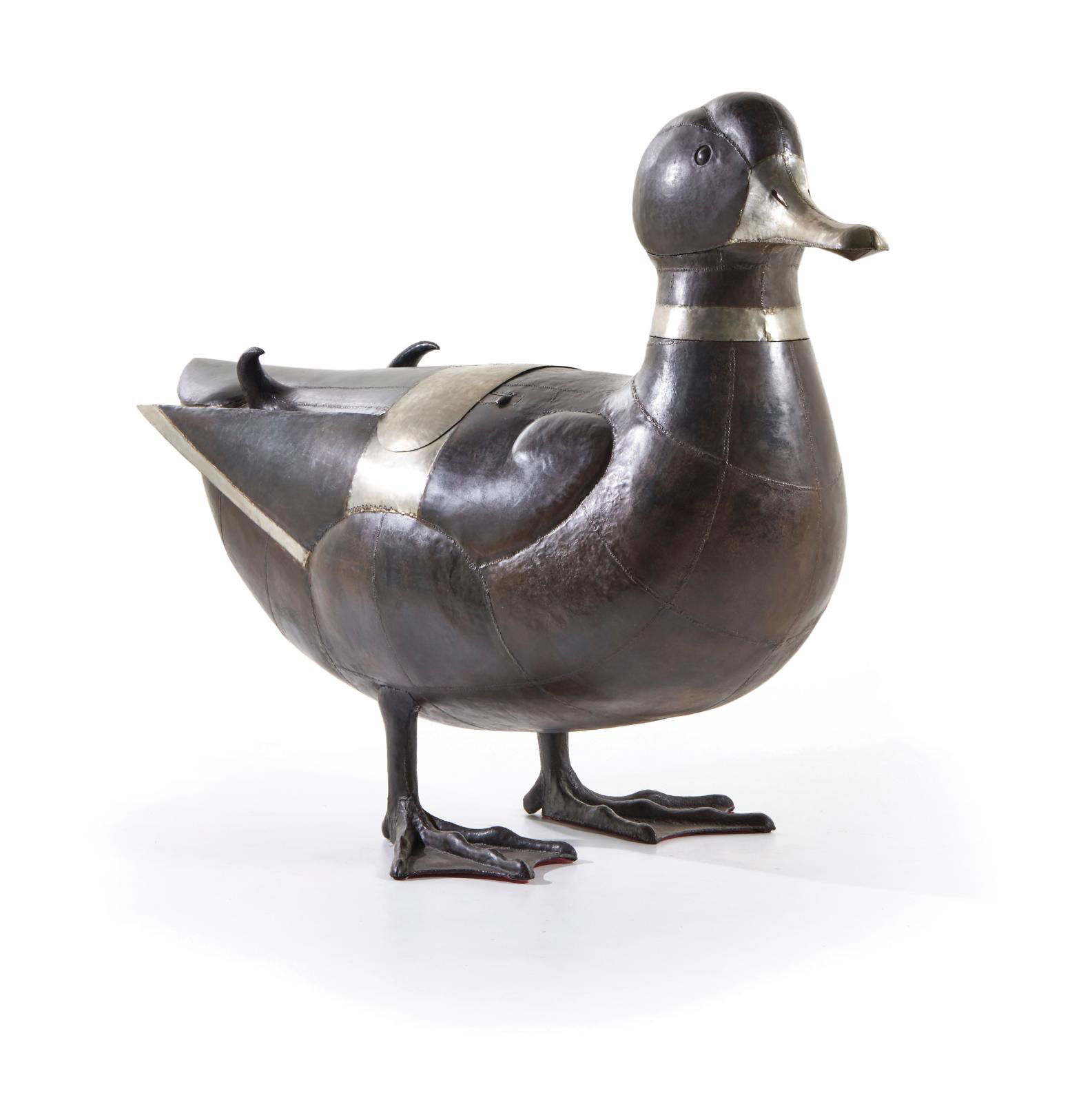 To quote Lalanne (1927-2008): "Art is like life: it should not be taken seriously." Duck hunting reopened briefly at Drouot on Monday, April 12, and several collectors were lucky enough to take a shot. But as with any game, there is only one winner. This time, it involved a sizable trophy, with the victorious bidder carrying off the Big Duck: a 1971 one-of-a-kind piece consisting of an unconventional clothes rack commissioned by some art-lovers for the entrance of their house. This massive object made of carburized iron and polished nickel silver encapsulates the artist's skill in the use of metals. His work glorifies lightheartedness: a quality that makes his bestiary deeply appealing and uplifting. When he conjures a rhinoceros, the beast willingly offers its flank to accommodate a desk and voilà Lalanne transformed it into a Rhinocrétaire or "Rhinoceriting desk"… A hippopotamus turns into a deep blue bathtub evoking its small earthenware cousin of ancient Egypt. A bird spreads its wings to become a rocking chair, and milky-fleeced sheep adorn chic gardens. But where did Lalanne's imagination spring from? He and his wife, Claude both felt that artworks could be useful. Together, they brought sculpture down from its lofty heights into the everyday world.

The €1,963,000 laid at the webbed feet of this marvel was worthy of its size, and one of the artist's highest scores. The price index of this decorative arts maverick has continued to climb ever since the legendary Yves Saint Laurent-Pierre Bergé sale (February 21-25, 2009). In 2010, there was a magnificently staged retrospective at the Musée des Arts Décoratifs in Paris and, more recently, in October 2019, the sale of the couple's studio contents: an event littered with records, not to mention pieces that had long remained safe from greedy eyes. Golden carp and wading birds in multiple editions regularly appear at Drouot, where they are totally in their element. However, it is rare to find such a large one-off piece for such a price. So we should rejoice and revel in a success that, we hope, will spawn others...

Though there was no way of competing with this lucky duck, the spotlight also fell on an artistic duo, Alberto Giacometti (1901-1966) and Jean-Michel Frank (1895-1941). Giacometti became involved in the decorative arts after meeting Frank. Their collaboration blossomed throughout the 1930s, resulting in table lamps, floor lamps, vases and wall lamps: nearly a hundred models that are still sought-after today. A copy of the "Star" floor lamp in bronze of c. 1936 (h. 148 cm/58.3 in) sold for €236,600. Two lamps—one "Greek" (large proof in natural terracotta, h. 44 cm/17.3 in), the other a "Calabash" (a small model in patinated plaster, h. 21.2 cm/8.3 in)—garnered €130,000 and €97,500 respectively. In a letter to his gallery owner in 1948, Giacometti wrote: "Objects interest me only a little less than sculpture, and they both come together at a certain point." The line of the decorative arts passed through two dazzling lights: François-Xavier Lalanne and Alberto Giacometti. 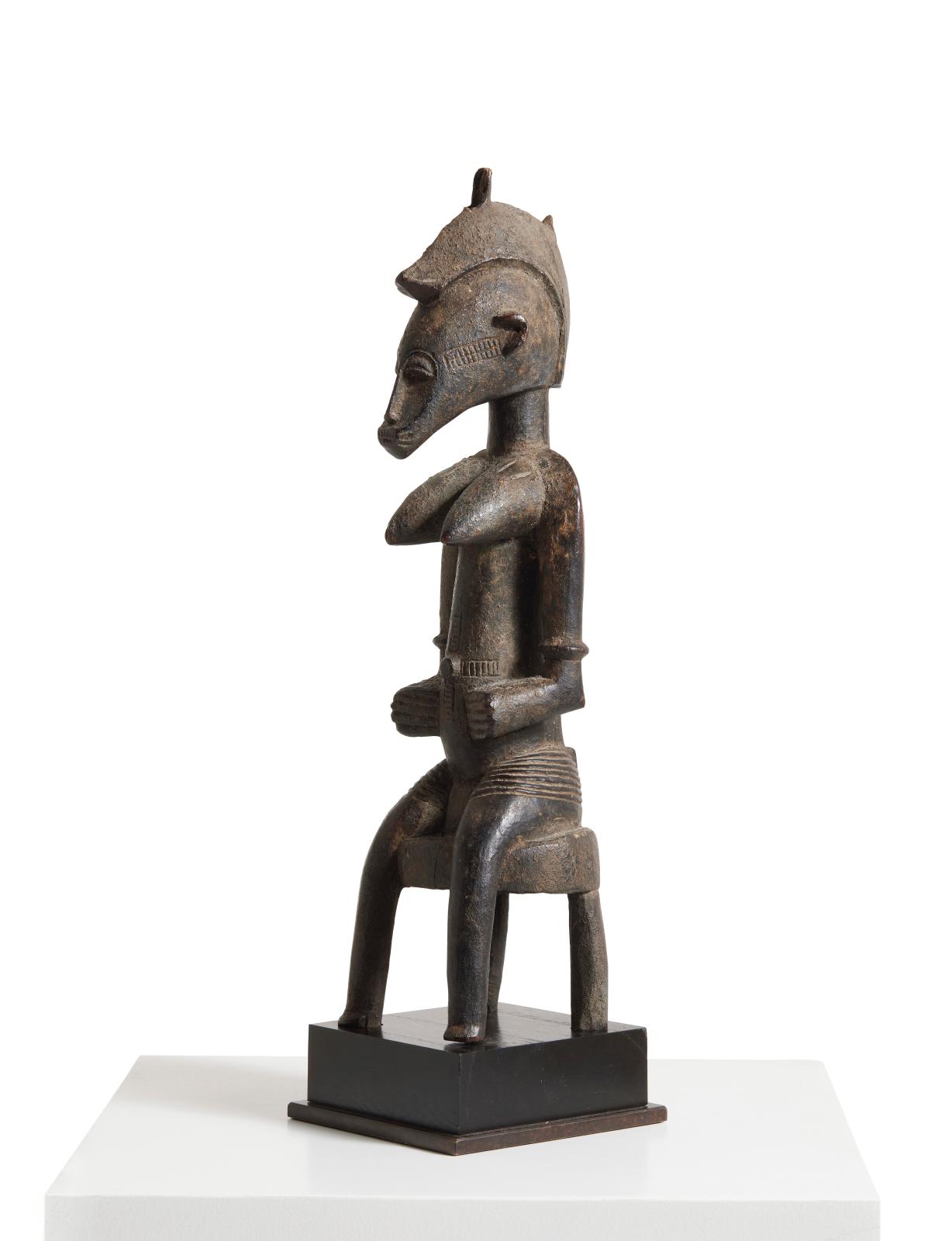 The World of Decorative Arts from Giacometti to African Sculpture

Newsfeed
See all news
An 18th-Century Masterpiece Will Be Unveiled for Heritage Days in Paris
Mark Your Calendars for the 7th Edition of "Un Dimanche à la Galerie"
Asia Now in Paris Places the Spotlight on Iran
Is Afghanistan's Art Safe Under the Taliban?
Not to be missed
Lots sold
Henri Lebasque at the Seaside
Lots sold
Flanders and France: Two Allegories Steal the Spotli…
s ymbolic figures as seen by a painter of the Flemish school and…
Lots sold
A Louis XV Provence Style Chest of Draw Sparks Inter…
Lots sold
Stags Triumph with Paintings by Baron Karl Reille