Not Just One, but Two Lemoynes!

While Versailles carried off a study by François Lemoyne for the ceiling of the Salon d'Hercule, a pair of Sèvres vases, one decorated with an antique scene after the same artist soared skyward. 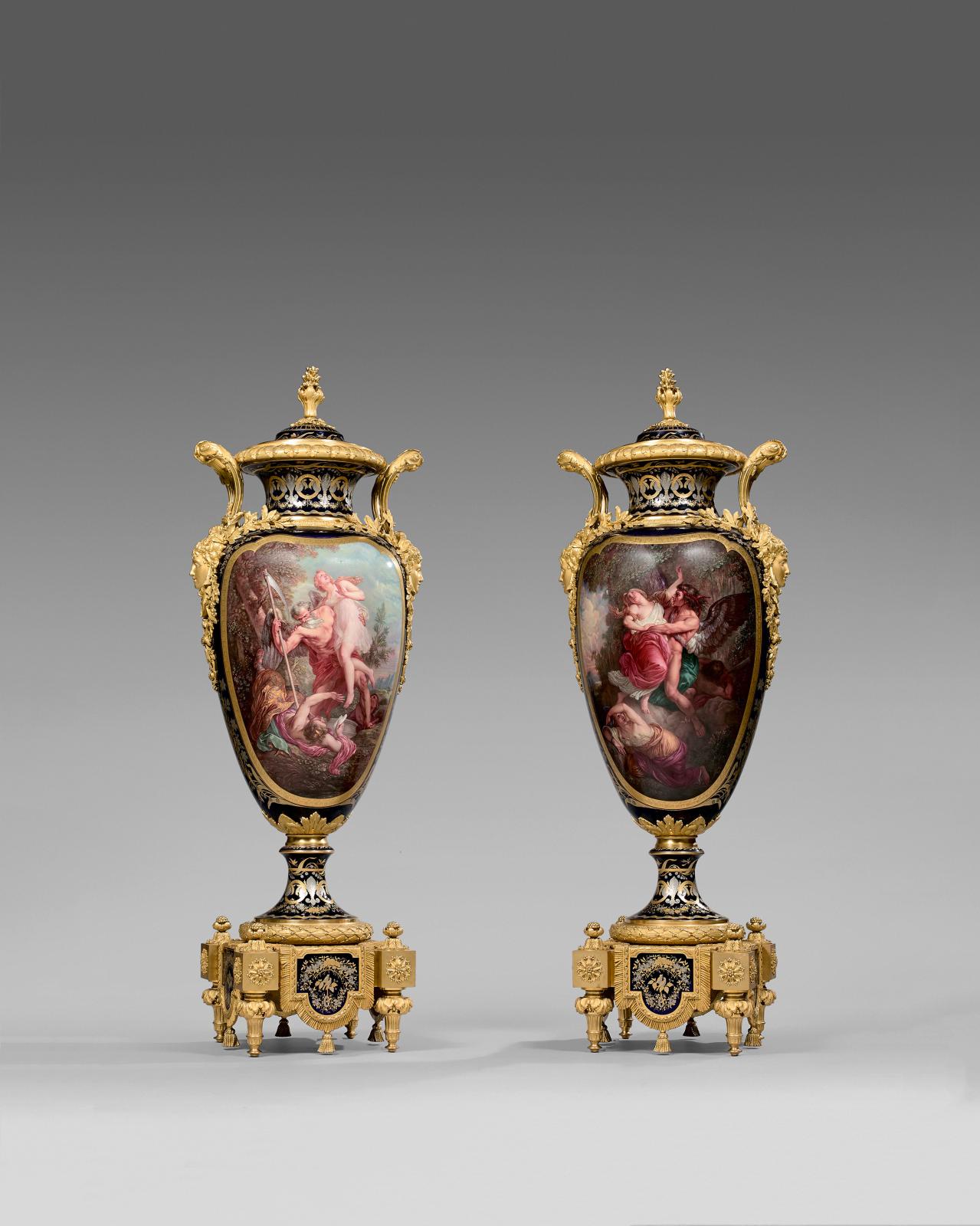 Pair of ovoid vases on porcelain pedestals, ornamented respectively on one side with Orythie enlevée par Borée after François-André Vincent and Le Temps sauvant la Vérité du Mensonge et de l'Envie after François Lemoyne, and on the other with forest scenes; gilt bronze mountings; three of the paintings signed "A. Schilt Sèvres", and the fourth "Ab. Schilt Sèvres 84", h. 125 cm.
Result: €393,700

There were some major surprises in Beaussant Lefèvre's sale from the very first bids. Firstly, a drawing on blue paper featuring a penned comment on the back – "n°1 Étude de l'Hercule" – already pointed the way to Versailles, consolidated by the subject and the artist. For this was a work by François Lemoyne (1688-1737): the painter commissioned to embellish the ceiling of the Salon d'Hercule, the last room in the Grands Appartements created during the reign of Louis XIV. Completed in 1736, this was most certainly the artist's masterpiece. The huge allegorical composition, entitled "The Apotheosis of Hercules", features no less than one hundred and forty-two characters: a titanic work that exhausted Lemoyne, who, despite being appointed First Painter to the King by Louis XV as a reward, committed suicide in June the following year, stabbing himself with a sword. In the last six months of his life, he produced Time Saving Truth from Falsehood and Envy, a painting now in London's Wallace Collection. The subject appealed to the Sèvres manufactory, which in 1884 asked one of its figure painters, François Philippe Abel Schilt (active there from 1847 to 1880), to reproduce it on the belly of a large ovoid vase, one of a matching pair (the other features The Rape of Orithyia by Boreas, after François-André Vincent). The two vases, enriched with impressive gilt bronze mountings illustrating the factory's virtuosity and the period's taste for heavily decorated pieces, fetched €393,700.

DESIGN and TABLES - CERAMICS - ART AND BEAUTIFUL FURNITURE OBJECTS - RUGS AND CARPETS
Beaussant Lefèvre
Info and sales conditions
Catalogue
Salerooms
Newsfeed
See all news
French Culture Budget Increases by 7.5 Percent
€840M Collected for the Reconstruction of Notre-Dame
FIAC Announces its Artistic Program
1:54 Contemporary African Art Fair, Ready for a 9th Edition
Not to be missed
Lots sold
From the Living Room to the Bedroom: Cannes-Style El…
The sale of the entire stock of furniture from a château in the…
Lots sold
The Art of Fin-de-Siècle Jewelry
In Lyon, two imposing necklaces conjured up the balls and evening…
Lots sold
Impressive Dutch Style Marquetry and an 18th-Century…
In Lorraine, the contents of a very fine residence set off to new…
Lots sold
Valtat: The Virtuoso of Color
The painter, famous for his vivid landscapes, was celebrated through…