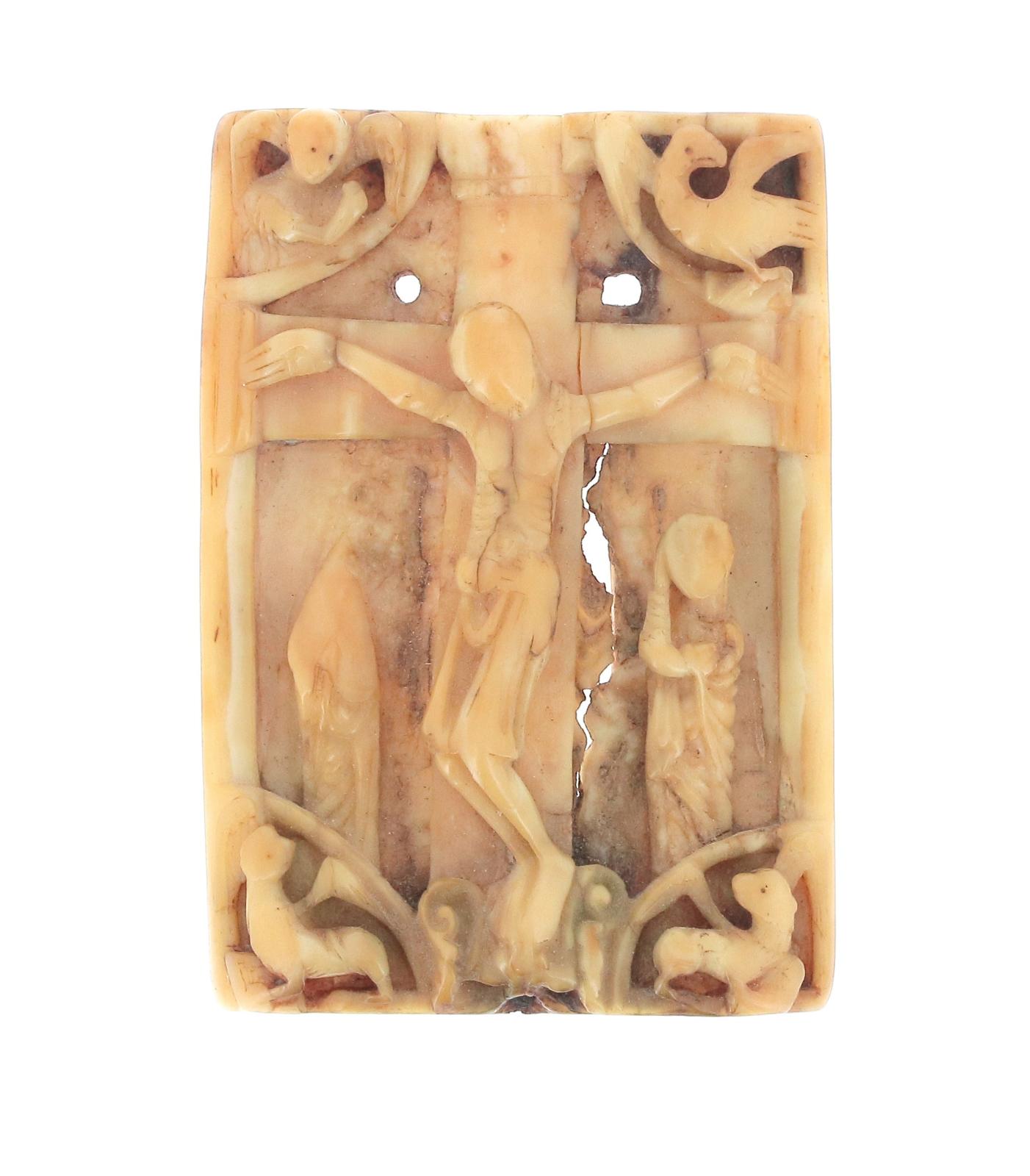 Osculatory or Kiss of Peace, ivory carved with the Crucifixion between the Virgin and Saint John and emblems of the Passion, 13th century, 7.3 x 5.1 cm.
Result: €312,000

This unpretentious rectangular ivory kiss of peace or holy kiss, carved with the Crucifixion between the Virgin and Saint John on the front, and the emblems of the Passion in the corners, fetched €312,000. For now, there is no accounting for this surprise – it had been very modestly estimated at €800 to €1,200. Was the auction miraculous? Probably not. The origin of this practice during the celebration of the Eucharist is found in Saint Paul’s Epistle to the Romans 16: "Greet one another with a holy kiss." A sign of communion, it was attested in 150 CE by Saint Justin and exchanged chastely on the lips. In 397 CE, it was forbidden between men and women and in the 13th century reserved for clerics only. The custom of transmitting peace to the laity by means of a small plate, usually in gilded or silvered bronze, was born at this time. Physical contact was suppressed but the gesture’s religious meaning remained. This piece is rare on two counts: it is made of ivory and dates to the 13th century, ranking it amongst the oldest of its kind.

COLLECTIONS & SUCCESSIONS - The Classical Centuries
Millon
Info and sales conditions
Catalogue
Salerooms
Newsfeed
See all news
Jesus College: The First UK Institution to Repatriate a Benin Bronze
The Venice Biennale of Contemporary Art is Getting a Research Center
Frieze Names Patrick Lee Director of Its New Seoul Fair
Fallen Art Star Charged with Selling Raymond Pettibon Forgeries
Not to be missed
Lots sold
Victor Hugo's Sun in the Clouds
La Maison de Victor Hugo in Paris preempted an ink drawing at the…
Lots sold
Master Clockmaker Charles Dutertre's Perfect Timing
Under the protection of Demeter and Persephone, a bronze clock by…
Lots sold
The Discreet Luxury of French Regional Silverware
With this second sale, the success of the highly original silverware…
Lots sold
Aristophil Collection Sale: Baudelaire Sharpens His …
At this new sale in the Aristophil collection series, the poet's…