Spectacular in terms of its rarity and its fresh colours, this multicoloured work in a feather mosaic from the newly conquered Mexico was pre-empted by the Musée du quai Branly-Jacques Chirac. 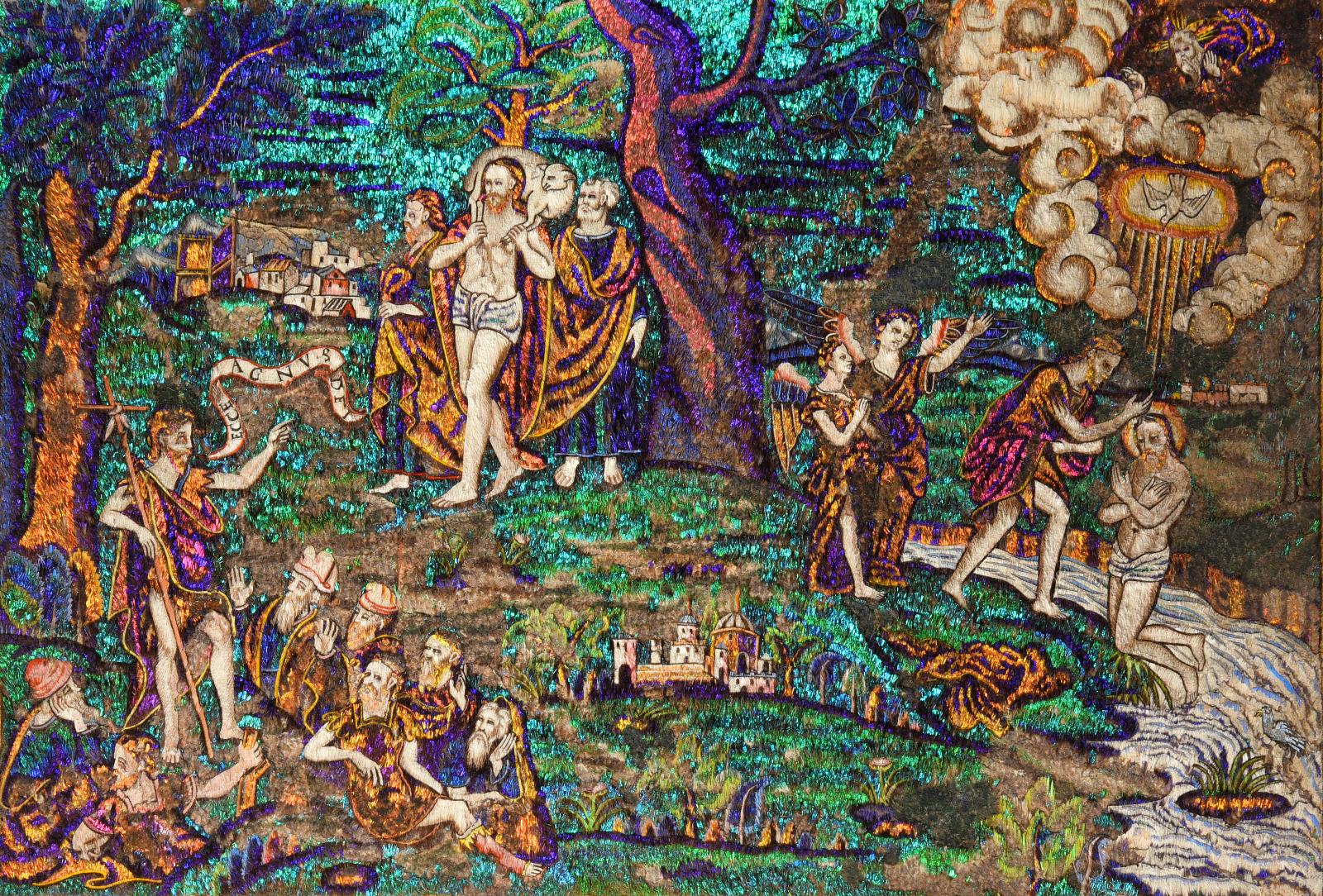 Mexico, second half of the 16th century, Christ the Good Shepherd and two scenes from the life of St John the Baptist in a landscape, polychrome feathers on panel, 20.4 x 30.2 cm; ebony frame inlaid with bone fillets and embellished with gilded silver flowerets probably made in Germany in the last third of the 16th century.
Result: €283,360

In February 2018, the oldest painting in Latin American Christian art known to date, evoking the Mass of St Gregory and executed entirely in feathers, was loaned by the Musée des Jacobins in Auch to the New York Metropolitan Museum. It was created in Mexico by Aztecs in 1539 for the Franciscan monk missionaries working in the country. One year after the Musée du quai Branly's exhibition “Feathers. Visions of Pre-Columbian America” (2016-2017), the Met thus devoted a show in turn to this evidence of the early evangelisation of the Americas, in the form of mixed works combining pre-Columbian techniques with Catholic subjects. Until this sale, six of the forty-odd works now scattered all over the world were in French museums, including three in Auch – such as the Holy Family and Holy Trinity bought for €272,000 with Rouillac in 2013. By pre-empting the one here for €283,630, the Musée du quai Branly has garnered a fine "featherweight" trophy! Of all the riches brought back from Mexico, featherwork pieces were among those most esteemed in Europe, admired by Isabella the Catholic, Charles V and Pope Sixtus V – who apparently rose from his throne to touch one being presented to him to see if it was truly made of this material. The art of featherwork was already considered one of the most refined in Mexico, even before the Aztecs settled there. Now in the Laurentian Library, the Florentine Codex compiled by the Franciscan friar Bernardino of Sahagún (1499-1590) contains several drawings depicting bird hunts, the preparation of pigments and feather-dyeing in a workshop in Amantecas. A way of making this art of yesteryear come even more alive.

Record for a Drawing by Carmontelle

The meeting between Vivant Denon and the Chevalier de Cossé, drawn by Louis Carrogis Carmontelle, captured everybody’s attention and broke the world record for a work on paper by the artist. 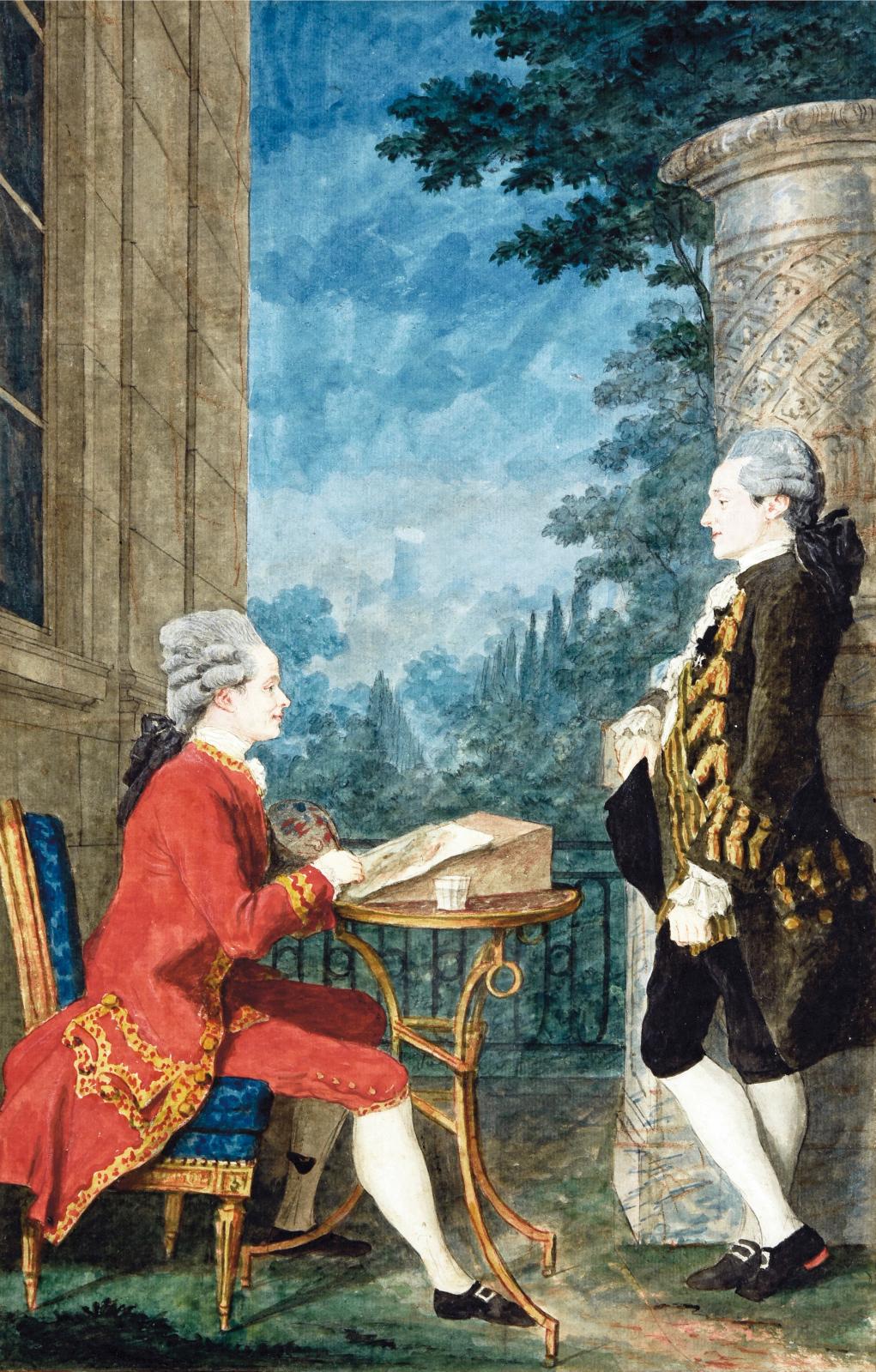 Fresh colours, elegant, famous models, fine execution and delicate overall composition propelled this watercolour, black pencil and red chalk drawing by Carmontelle to a world record of €173,880 for one of his works on paper (source: Artnet). Vivant Denon Making the Portrait of the Chevalier de Cossé – obviously with much pleasure – surpassed Monsieur de Mornay, governor of Saint-Cloud, which fetched €141,000 at Sotheby's on 29 September 2015. A story about the meeting between the future head of the Napoleon Museum and the governor of Paris appeared in la Gazette, which put the two noble figures on its cover. Carmontelle’s lifetime spanned almost the entire 18th century. He left an immense body of work not only as an illustrator – his Young Mozart next to his sister and father (Carnavalet Museum, Paris) has featured in many school textbooks – but also as a playwright, novelist and art critic. Less known is that he succeeded Diderot as the Salon critic after 1779. A trio of brilliant minds for a century that did not lack any.

Chasse - Mobilier & Objets d'Art - Haute Époque
Coutau-Bégarie
Info and sales conditions
Catalogue
Salerooms
Newsfeed
See all news
French Culture Budget Increases by 7.5 Percent
€840M Collected for the Reconstruction of Notre-Dame
FIAC Announces its Artistic Program
1:54 Contemporary African Art Fair, Ready for a 9th Edition
Not to be missed
Lots sold
From the Living Room to the Bedroom: Cannes-Style El…
The sale of the entire stock of furniture from a château in the…
Lots sold
The Art of Fin-de-Siècle Jewelry
In Lyon, two imposing necklaces conjured up the balls and evening…
Lots sold
Impressive Dutch Style Marquetry and an 18th-Century…
In Lorraine, the contents of a very fine residence set off to new…
Lots sold
Valtat: The Virtuoso of Color
The painter, famous for his vivid landscapes, was celebrated through…