The Sunny World of Marc Chagall

An auction lit up by the talents of Marc Chagall, Jacques-Émile Ruhlmann and Tamara de Lempicka 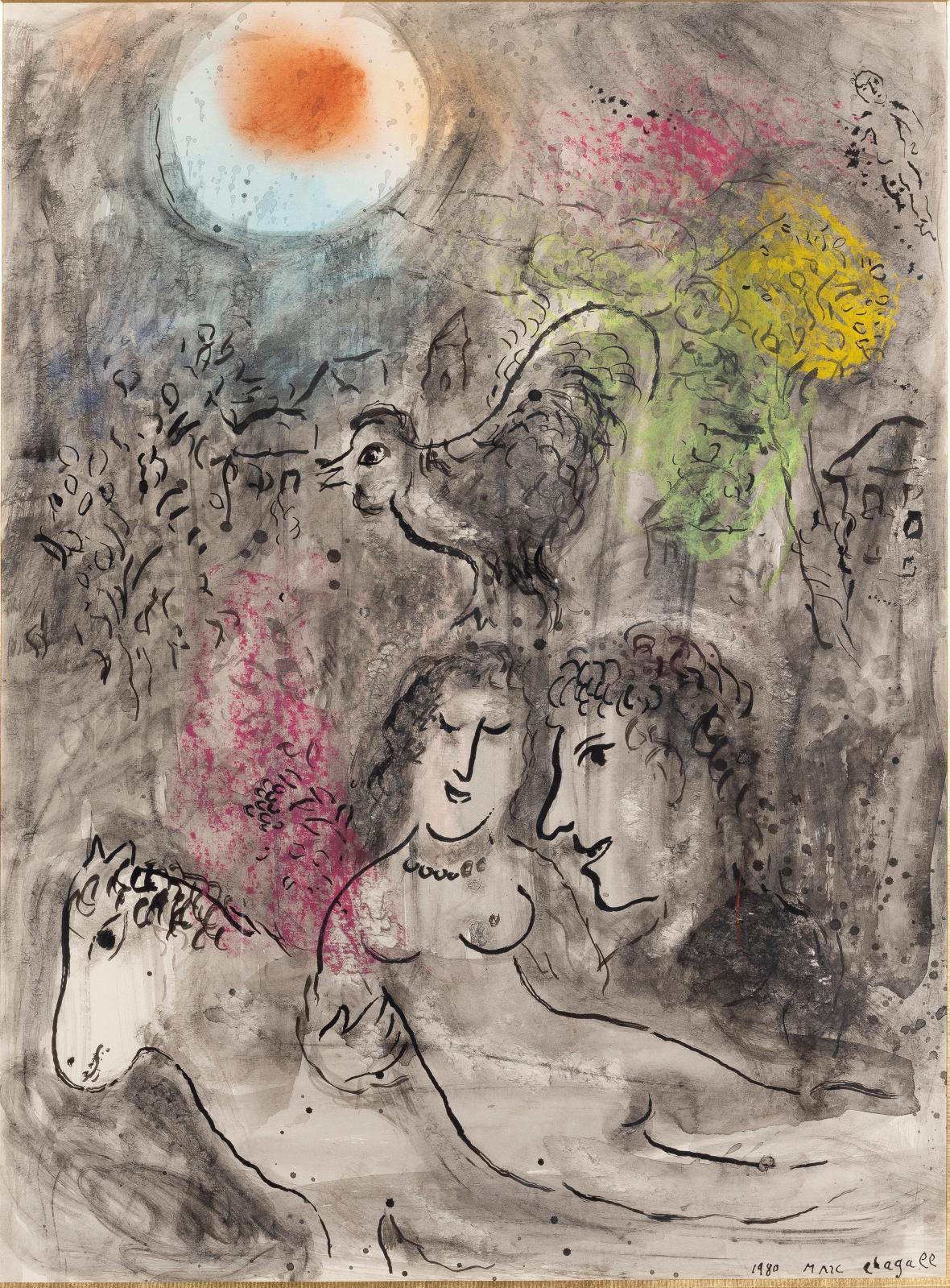 Throughout his long life, Marc Chagall (1887-1985) drew on reminiscences of a youth spent in Belarus, particularly Vitebsk, conjuring up images and memories in his works. For instance, we see the recurring motifs of the rooster, the donkey and the farm in this Indian ink wash, watercolor and pastel from 1980, which fetched €327,076. The couple was also an essential element in his work and, with Les Amoureux au soleil orange (Lovers with Orange Sun), he limned a fresh ode to love: a theme that guided him from the moment he met Bella Rosenfeld, his wife, muse, inspiration, partner—and passion. The young writer, whom he met in 1909 and married in 1915, inhabited his paintings throughout their life together and long after her death in 1944. Bella had a pale complexion and extraordinarily "large, round, black eyes", he wrote in 1922, recalling the first time he met her, adding "they are my eyes, my soul". An eternal icon, she takes wing in the skies of his dream-like compositions and imbues them with beauty. Today, she fascinates collectors.

Likewise, their desire for pieces by Jacques-Émile Ruhlmann (1879-1933) is as intense as ever. A table lamp from 1922-1923 in silvered bronze (h. 60 cm/23.6 in, dia. 37 cm/14.5 in) by the designer shone out with a bid of €113,100. Its bead curtain lampshade with a spherical body and bead molding evokes the skirts of the Ballets Russes dancers—but while these dancers twirled to the sound of the balalaika, here the model undulates to the vibrations of the light. 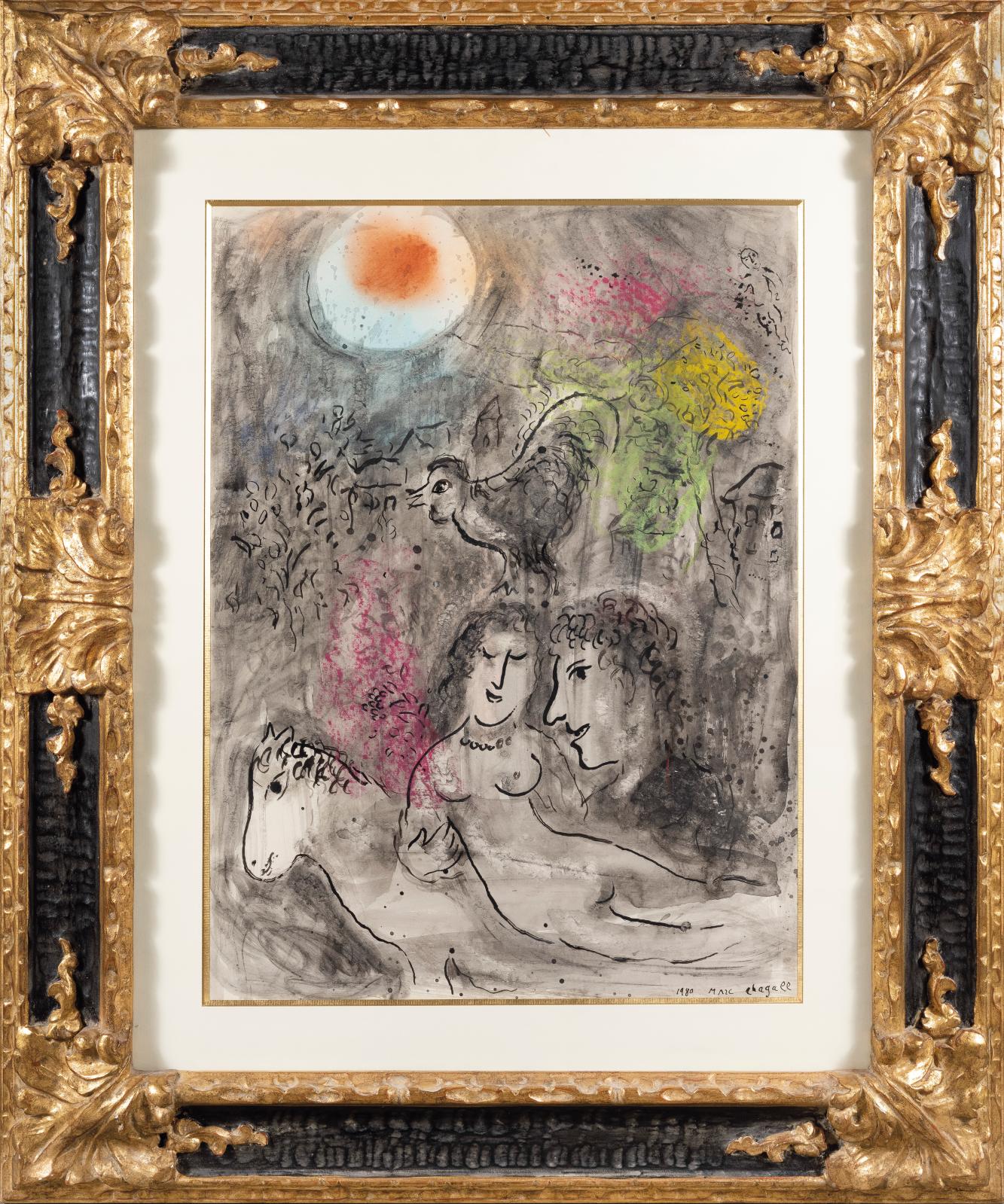 Chagall, Ruhlmann: A Veritable Who's Who of 20th-Century Art

With works by Calder, Bugatti, Jeanneret, Ruhlmann, Zadkine and Chagall art and design of the 20th century is expressed in multiple guises.

Newsfeed
See all news
UNESCO Announced the Return of the Gilgamesh Tablet to Iraq This Thursday
"Œuvres Choisies" Exhibition Ushers In the New Auction Season at Drouot
RER C Train Will Transport You to the Paris City Museums
At Saqqara, the "Southern Tomb" Reopens After 15 Years of Excavations
Not to be missed
Lots sold
From the Living Room to the Bedroom: Cannes-Style El…
The sale of the entire stock of furniture from a château in the…
Lots sold
The Art of Fin-de-Siècle Jewelry
In Lyon, two imposing necklaces conjured up the balls and evening…
Lots sold
Impressive Dutch Style Marquetry and an 18th-Century…
In Lorraine, the contents of a very fine residence set off to new…
Lots sold
Valtat: The Virtuoso of Color
The painter, famous for his vivid landscapes, was celebrated through…