The versatile artist and designer Jean Dunand (1877-1942) was accompanied in the auction waltz by Vu Cao Dam and Lucien Rollin. 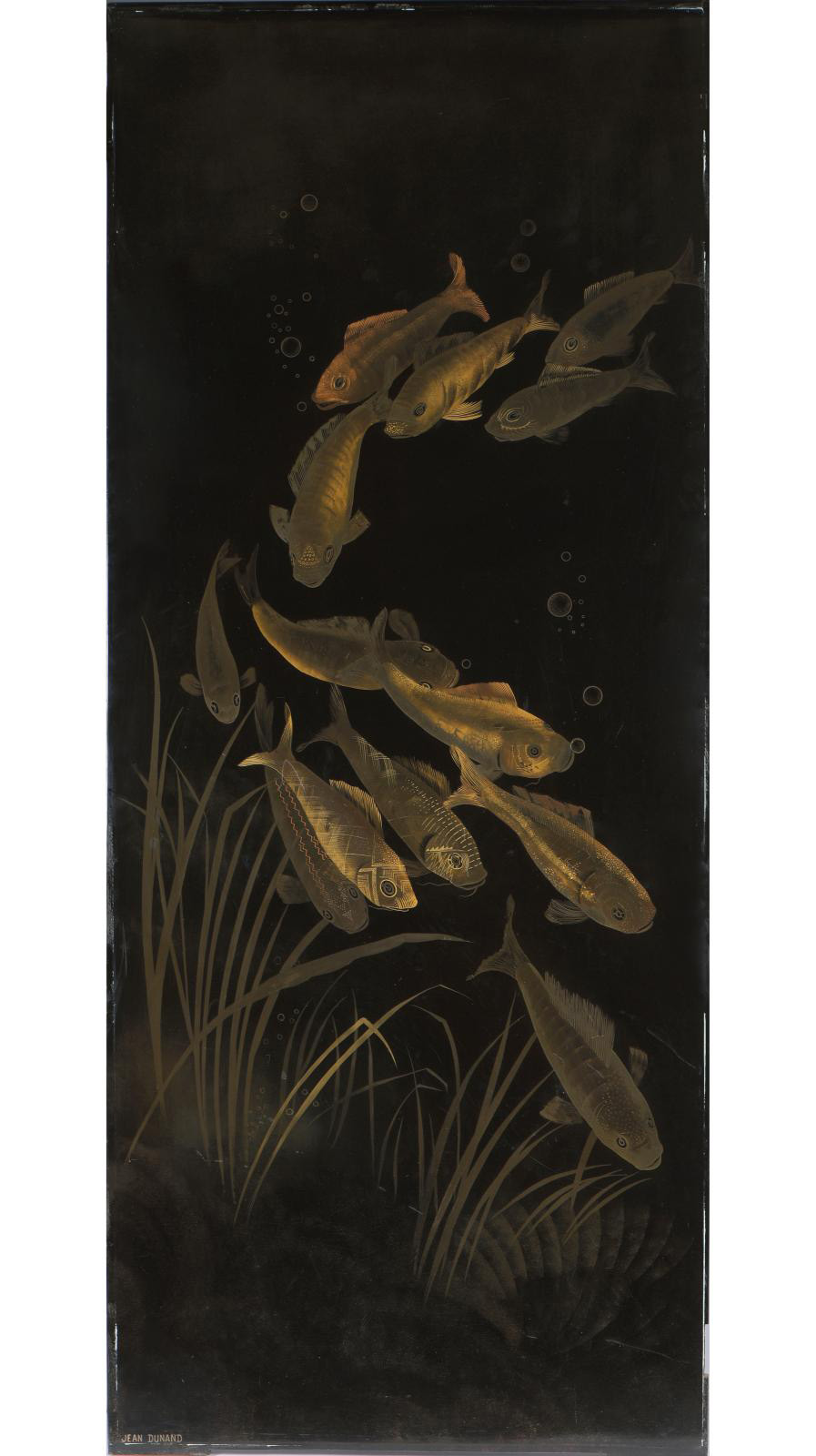 A folding screen by Jean Dunand, whose skillful, inventive copper vases won awards at the 1906 Milan International Exhibition, soared past its high estimate of €30,000 to fetch €125,000. Here, he used gold and silver just as effectively. In the rays of light penetrating the lacquer’s black water, his varied motifs breathe life into the fish, whose heads feature geometric patterns similar to those on his vases. The mouth of one fish, surrounded by a frieze of triangles and a forehead adorned with small circles between large round eyes, releases cylindrical bubbles spangled with precious metal. Dunand’s delicate craftsmanship is a marvelous match for the refinement of Japonisme, in vogue in the French decorative arts since Japan’s participation in the 1900 Paris Exposition. Japan opened up to the West in the early 20th century, sweeping away centuries of isolation.

Asia was also celebrated in the art of the Vietnamese artist Vu Cao Dam (1908-2000), whose terracotta Head of a Young Woman fetched €65,000. His modeling technique—letting the material show traces of his creative process—was the same as Rodin and Giacometti’s, whose works he admired after moving to Paris in 1931 (21 x 12 x 12 cm/8.27 x4.73 x 4.73 in). Art Deco furniture was represented by a pair of pedestal tables designed by Lucien Rollin (1906-1993) in the 1930s. They feature double oval rosewood tops and four fluted legs ending in steel and sold for €55,000.

ARTS OF THE 20TH CENTURY
Le Floc'h
Info and sales conditions
Catalogue
Newsfeed
See all news
Jesus College: The First UK Institution to Repatriate a Benin Bronze
The Venice Biennale of Contemporary Art is Getting a Research Center
Frieze Names Patrick Lee Director of Its New Seoul Fair
Fallen Art Star Charged with Selling Raymond Pettibon Forgeries
Not to be missed
Lots sold
Victor Hugo's Sun in the Clouds
La Maison de Victor Hugo in Paris preempted an ink drawing at the…
Lots sold
Master Clockmaker Charles Dutertre's Perfect Timing
Under the protection of Demeter and Persephone, a bronze clock by…
Lots sold
The Discreet Luxury of French Regional Silverware
With this second sale, the success of the highly original silverware…
Lots sold
Aristophil Collection Sale: Baudelaire Sharpens His …
At this new sale in the Aristophil collection series, the poet's…