The Tsar and the Order of Malta

Some of Paul I’s historic diplomatic documents return to Moscow. 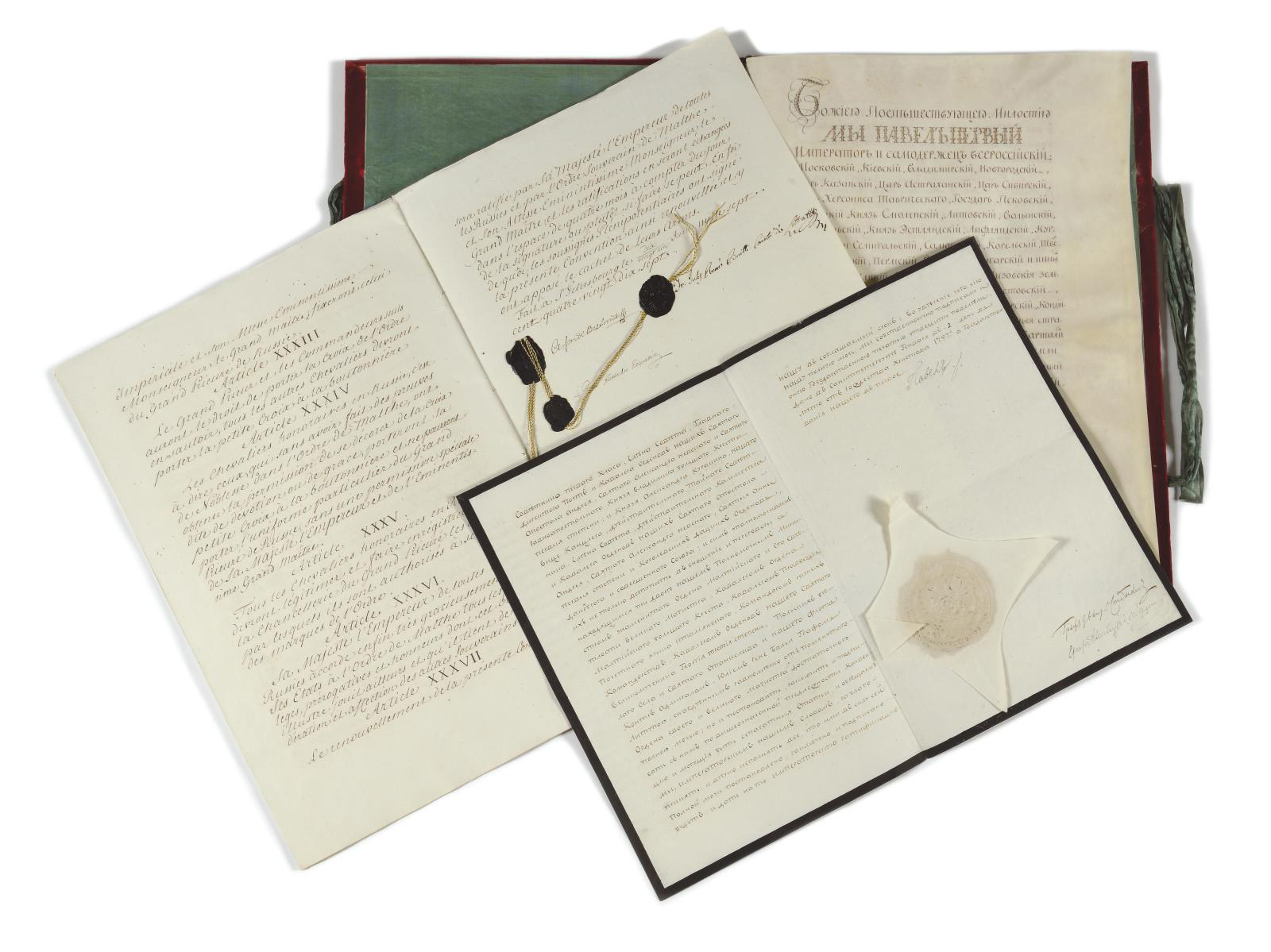 Saint Petersburg, 1797, creation of the Grand Priory of Russia for the Order of Malta through six diplomatic documents, three signed by Paul I and three by his plenipotentiaries, Alexander Bezborodko, Alexander Kurakin and Giulio Litta.
Result: €518,750

This two-day sale of Russian art got off to a booming start on Saturday, March 13. Collectors battled for historic documents that garnered a total of €518,750, soaring past the high estimate of €30,000: six diplomatic deeds ratifying the creation of the Grand Priory of Russia for the Order of Malta in 1797. At the time, the geopolitical situation was tense. With the rising power of a Bonaparte with Malta in his crosshairs, the Russian Empire suddenly absorbed a large population of Polish Catholics after their country was partitioned and the fate of the order’s priory in Poland was uncertain, while in France it was dissolved and its property confiscated. As the Grand Master sought Russia’s protection and financial backing, Tsar Paul I, a foe of revolutionary France, looked favorably on an alliance with the Order of Malta, which would allow him to shore up his positions in the Mediterranean and set himself up as a defender of Catholics and Europe’s aristocracy. The two parties signed an agreement making the Orthodox Tsar the Grand Prior of the Catholic order. A political necessity…

Russian Art - Русское искусство
Osenat
Info and sales conditions
Catalogue
Newsfeed
See all news
The New Orange County Museum of Art Slated to Open in 2022
“Vault by CNN": NFTs of Historic News Coverage to Go Up For Sale
Mexican Railway Development Slowed by the Discovery of 13,911 Pre-Columbian Remains
New York’s Callicoon Fine Arts Gallery to Close After Final Show
Not to be missed
Lots sold
Back to the Louvre for a Heroic Drawing by Fontaine
It is only fitting that this work by Fontaine has returned to the…
Lots sold
A Lalanne Rabbit Hops to Success
Modern and natural works were the core of this sale devoted to Claude…
Lots sold
La Rochelle, Impression: Shifting Sunlight
Water was the blue thread running through this sale’s four most…
Lots sold
A Fishing Scene by Joseph Vernet and a Preemption by…
The auction featured a painting by Vernet and a pair of corner tables…