This fine composition by Émile Friant consolidates the roots of this somewhat unclassifiable Nancy painter in the art history of the second half of the 19th century. 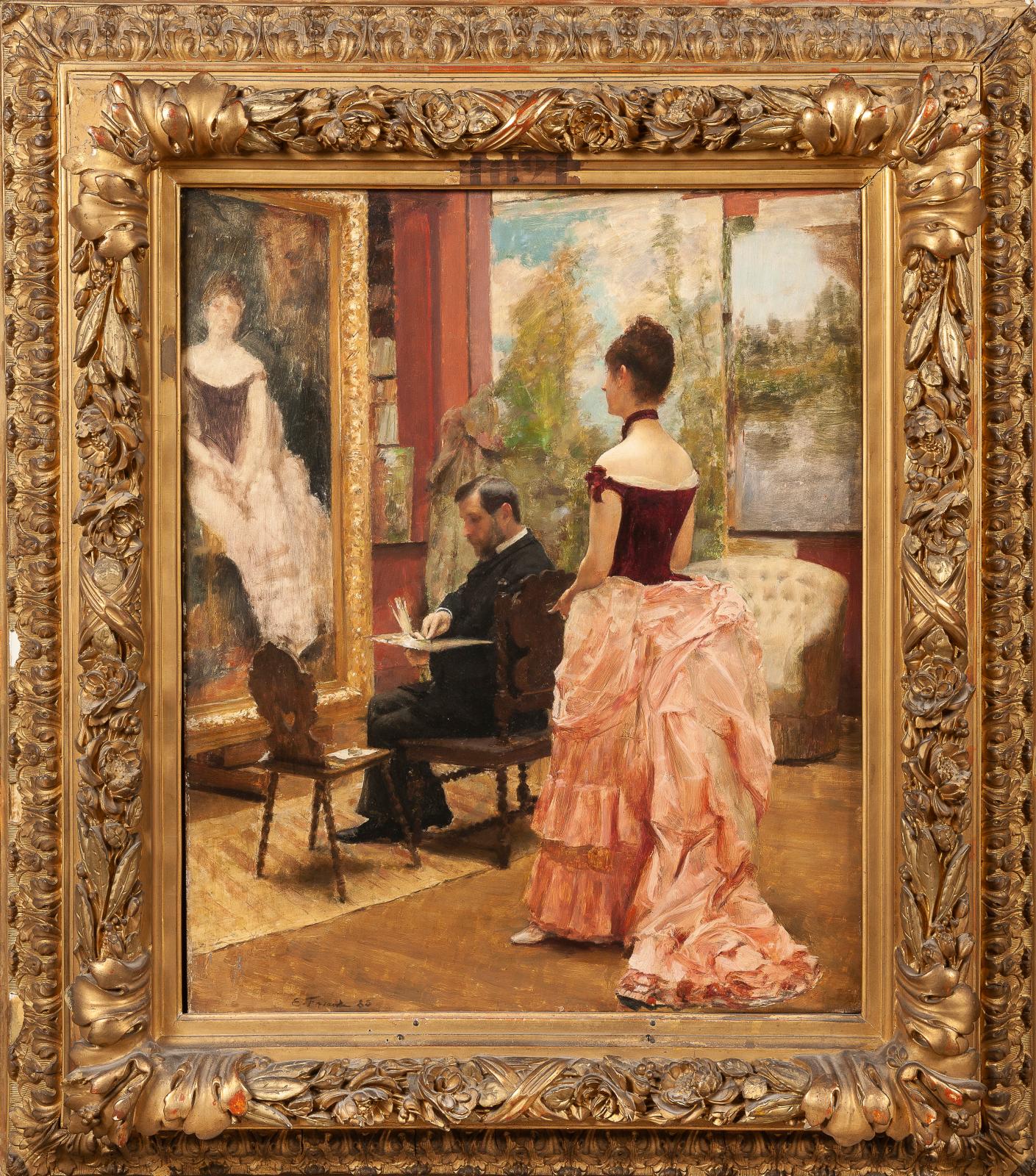 Artists loved to paint each other, and art history is teeming with such works, executed often in friendship and sometimes in homage. With the 1885 panel here, Émile Friant became part of this long genealogy. The appealing, well-named L’Ébauche (The Sketch) garnered €88,480. It vividly depicts Léon Charles Bénigne Vaillant de Meixmoron (1839-1912), an eminent Lorraine engineer, patron of Impressionist artists and active painter who participated regularly in Paris salons, as he works on a portrait of his wife, Lucie Marie Emma de Maillart de Landreville. Friant was only 22 when he produced this particularly spirited composition, in which we sense the husband's total concentration, the restraint of the young woman and the atmosphere of a late 19th century studio. Yet what incredible mastery, already! Here we are witnessing high society in Nancy, a far cry from the ambiance of the more political paintings that later made him famous. In the winter of 2016-2017, the Musée des Beaux-arts in Nancy devoted a major retrospective to him shedding considerable light on the different facets of an "unclassifiable genius", as he was described in the catalogue. It is true that Friant seemed equally at ease in realistic portraits and scenes of daily life, treated with more naturalism. In various masterpieces like La Toussaint (All Saints' Day) of 1889 (Musée des Beaux-Arts, Nancy) and the Ombres portées (Cast Shadows) of 1891 (Musée d’Orsay), we see to what extent he moved beyond anecdotal representation and tapped into innovative movements. The sale also turned up a Portrait présumé de Madame Récamier (Presumed portrait of Madame Récamier) (66 x 52 cm), a 19th century French School oil on canvas that at present remains anonymous, but displayed its own brilliance and was knocked down for €13,272.

Art et collection
Deburaux - Du Plessis
Info and sales conditions
Catalogue
Salerooms
Newsfeed
See all news
French Culture Budget Increases by 7.5 Percent
€840M Collected for the Reconstruction of Notre-Dame
FIAC Announces its Artistic Program
1:54 Contemporary African Art Fair, Ready for a 9th Edition
Not to be missed
Lots sold
From the Living Room to the Bedroom: Cannes-Style El…
The sale of the entire stock of furniture from a château in the…
Lots sold
The Art of Fin-de-Siècle Jewelry
In Lyon, two imposing necklaces conjured up the balls and evening…
Lots sold
Impressive Dutch Style Marquetry and an 18th-Century…
In Lorraine, the contents of a very fine residence set off to new…
Lots sold
Valtat: The Virtuoso of Color
The painter, famous for his vivid landscapes, was celebrated through…