Spotlight on a Louis XV flat desk and some Languedoc marble Empire vases. 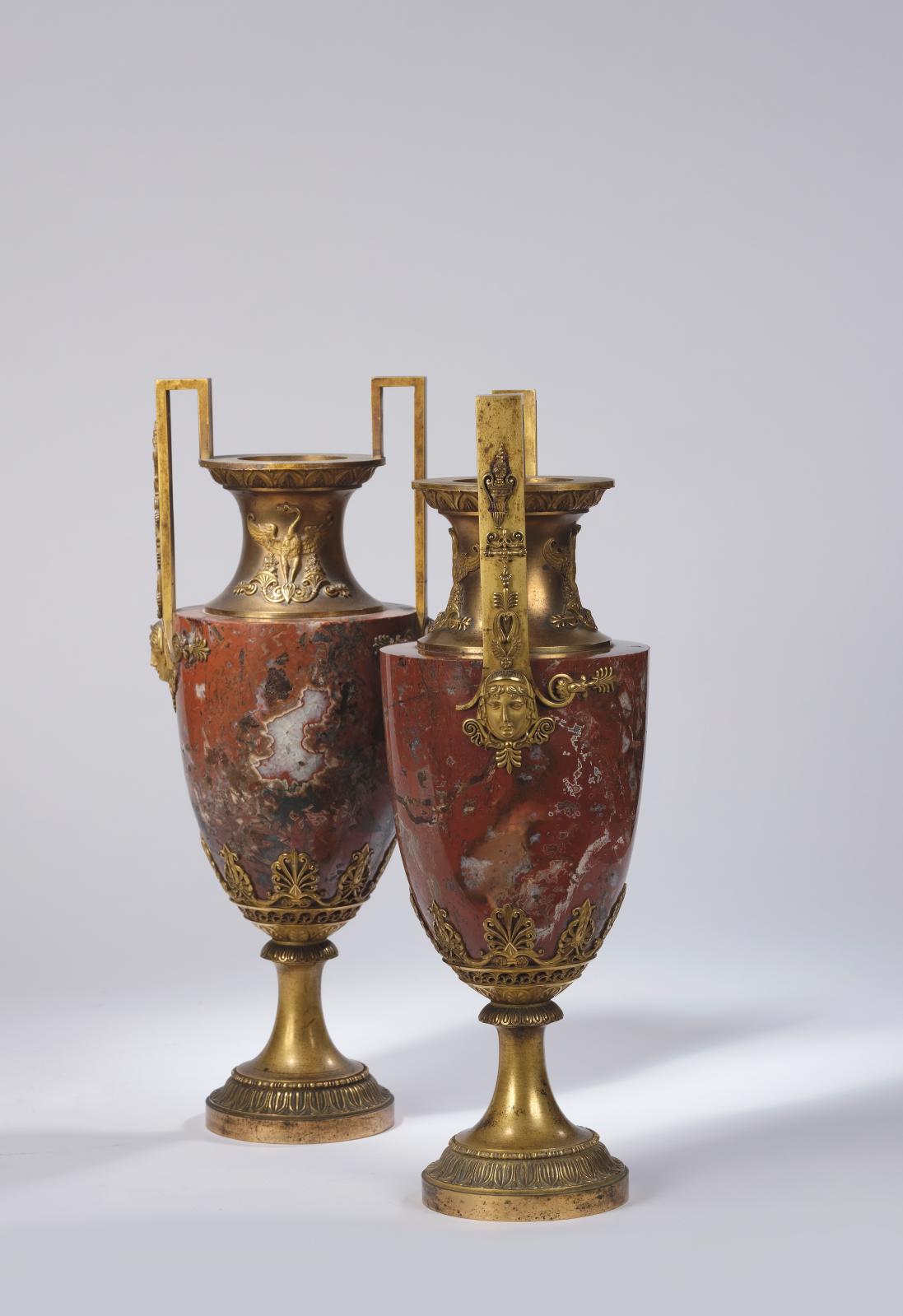 The Languedoc marble chosen for the pair of vases (reproduced) aroused keen interest because of its unusual use. Known from Antiquity, and much admired for the beauty of its range of white- and grey-veined reds, it was mainly used in architecture from column facings to mantelpieces, and in furniture and marquetry. Louis XIV's liking for it made a prestigious material worthy of Versailles, and it was even successfully exported to Italy, the ultimate homeland of marble. (For example, it can be found on some of the pillars in St Peter's basilica in Rome.) However, expert Cédric Henon stresses that this is the first recorded use of the ornamental stone in Empire vases, though its decorative beauty is a considerable asset, set off here by gilt bronze mountings with particularly refined chasing. This certainly contributed to the success of these rare objects, which inspired a battle via fifteen phones between Europe and the US. The other results of this sale highlighted the 18th century, with a Louis XV flat desk in darkened wood garnering €102,500. Coming from the same estate, it had been in its owner's family for over a century. Though given an estimate of only €3,000 due to the poor condition of its lacquer decoration, it was highly acclaimed for the delicacy of its reduced proportions and the quality of its bronzes: its keyhole plates can be compared with desks by BVRB and sometimes Jacques Dubois.

Art du XVIIIe siècle
Le Floc'h
Info and sales conditions
Catalogue
Newsfeed
See all news
David Hockney’s Design for the London Subway Is Mocked Mercilessly Online
Mixed-Media Artist Robert Longo to be Represented by Pace Gallery after Metro Pictures Closure
Submissions Open at ETH Zurich for Scholarly and Experimental Articles
Latinx Art Expert E. Carmen Ramos is Appointed National Gallery of Art’s Chief Curator
Not to be missed
Lots sold
A Record on Paper for Nicolas de Staël
Designed to illustrate the cover of a collection of poems by critic…
Lots sold
A Fine Home for the Duchesse d'Aumale's Toiletry Set
This crystal and vermeil travel kit by Aucoc ended its journey with…
Lots sold
Molière, Master of Ceremonies
At this sale for bibliophiles, the author of Le Bourgeois Gentilhomme…
Lots sold
Vasarely, Buffet and Hockney: 20th-century Masters in…
Works by Vasarely, Buffet and Hockney were accompanied by sought-after…