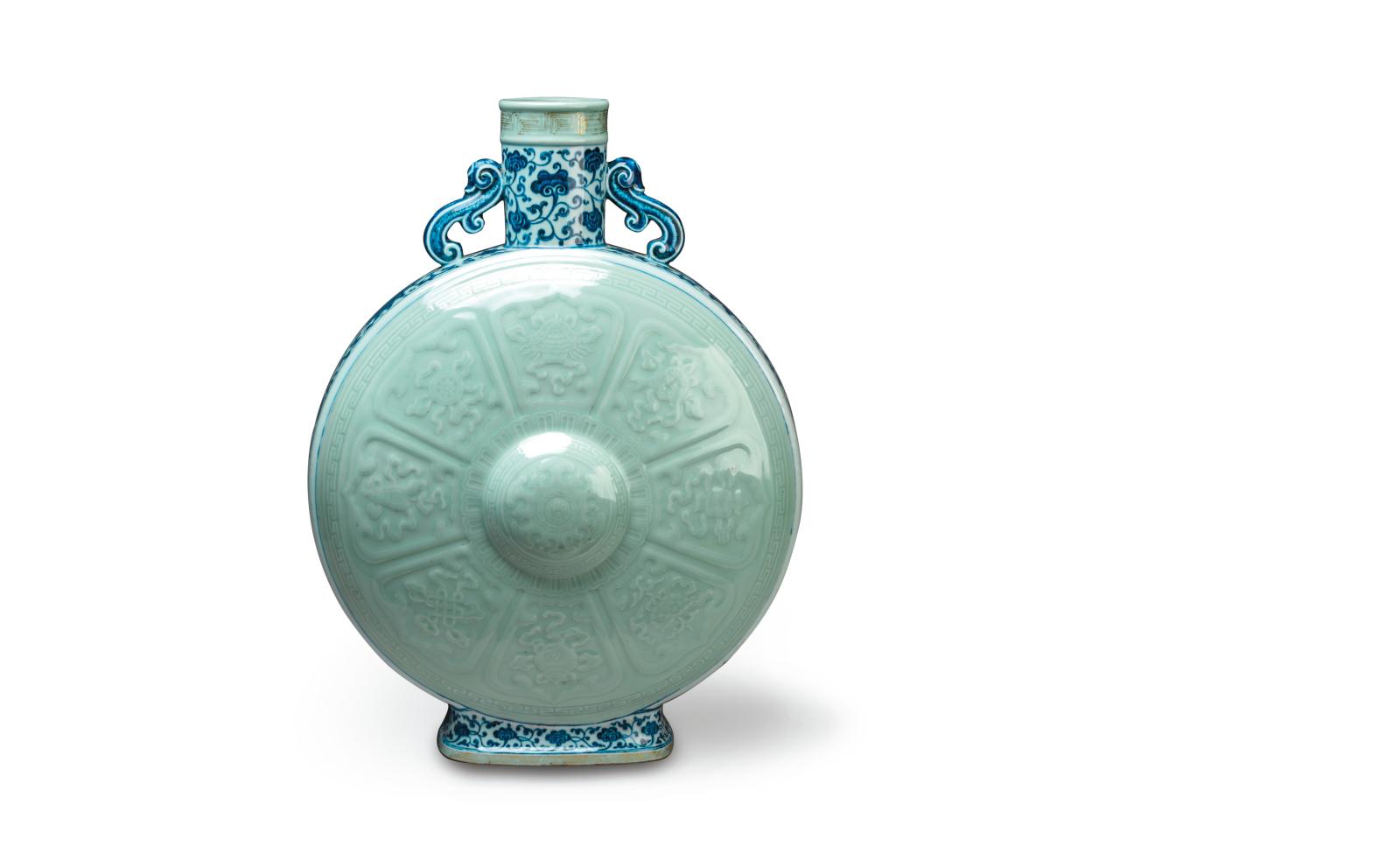 €5,089,000
China, Qianlong period, (1736-1795), baoyueping moon flask vase with a celadon-glazed belly and blue underglaze sides and neck. On the underside of the base, the six-character mark of Qianlong in zhuanshu script in blue underglaze, h. 49 cm.

For nearly three decades, the Rouillac auction house has been staging its celebrated Garden Party, which returns each year with its share of dramatic turns. The 2018 vintage certainly kept up the tradition, with a total of over €10,300,000 for 10 June alone. A large porcelain moon vase with the famous square mark of the Qianlong Emperor (1736-1795) was knocked down for €5,089,000 to a French buyer, who battled with nine groups of bidders from China and its diaspora. A world record for this type of artefact was merited because "there are only two moon vases like this in the world, so it is priceless," says Maître Rouillac. (The other was sold for €1,801,00 in April 2016 at Sotheby's Hong Kong.) The vase was probably brought back from China by an ancestor of the family, a general staff officer in the French royal navy, between 1842 and 1847. The other star of the show, "Christ enfant méditant sur les instruments de la Passion", fetched €3,596,000. This masterpiece by the Le Nain brothers was unknown until recently, when it was discovered by Maître Rouillac at a house in the Vendée. This posted a world record for a work by the artist brothers, despite being forbidden to leave the territory, as a national treasure, by the Ministry of Culture. It fired the enthusiasm of three French collectors, one of whom carried it off without interference from the Musées Nationaux, which unexpectedly did not invoke their right to pre-empt.

30ème VENTE GARDEN PARTY - I
Rouillac
Info and sales conditions
Catalogue
Newsfeed
See all news
Jesus College: The First UK Institution to Repatriate a Benin Bronze
The Venice Biennale of Contemporary Art is Getting a Research Center
Frieze Names Patrick Lee Director of Its New Seoul Fair
Fallen Art Star Charged with Selling Raymond Pettibon Forgeries
Not to be missed
Lots sold
Victor Hugo's Sun in the Clouds
La Maison de Victor Hugo in Paris preempted an ink drawing at the…
Lots sold
Master Clockmaker Charles Dutertre's Perfect Timing
Under the protection of Demeter and Persephone, a bronze clock by…
Lots sold
The Discreet Luxury of French Regional Silverware
With this second sale, the success of the highly original silverware…
Lots sold
Aristophil Collection Sale: Baudelaire Sharpens His …
At this new sale in the Aristophil collection series, the poet's…