If one painter epitomizes the spirit of Romanticism, it is Gustave Doré. He could not help but illustrate the tale of Macbeth, a medieval chronicle retold by the brilliant English playwright. 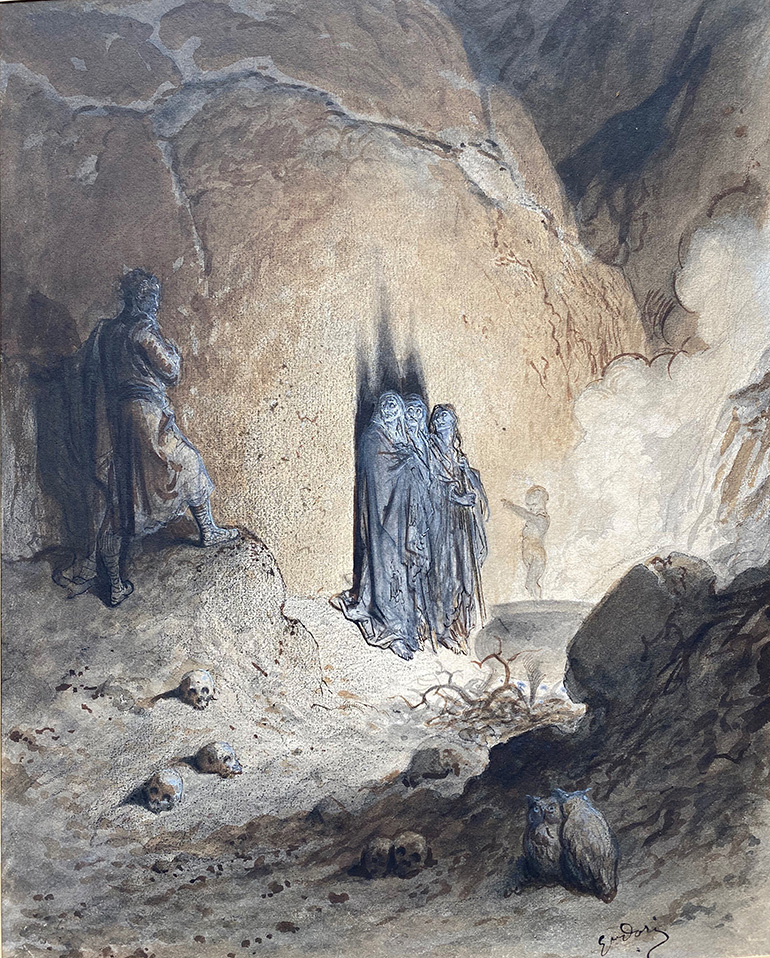 Macbeth dans la grotte des sorcières (“Macbeth in the Witches’ Cave”), mixed technique, ca. 1866-1870, is indeed the fruit of an alliance. Published for the first time in 1623 in the First Folio (a compilation of Shakespeare’s plays), Macbeth, set in Scotland, is about an overreaching nobleman who kills the king to grab his crown. It is full of malevolent beings and phantasmagorical scenes, including the apparition of the three witches before the future ruler—which inspired Doré 250 years later. The French artist was passionate about a project to illustrate Shakespeare’s plays, which he never carried out despite saying, "My intention is to make Shakespeare my masterpiece." All that passion had an effect on connoisseurs: from a very reasonable upper estimate of €6,000, the price soared to €89,496. This drawing is related to one in the Budapest Museum of Fine Arts. The auction also included art books, such as L’École de Paris au seuil de la mutation des arts (“The School of Paris on the Verge of the Transformation of the Arts”), which fetched a hefty €11,063. Published by Les éditions Sentiers, it features 15 colour lithographs (76 x 54 cm) by artists including Pierre Soulages, Sonia Delaunay, André Lanskoy and Alfred Manessier, each signed and justified "HC III/XXX".

[SALE CONFIRMED] of paintings, furniture and works of art
Sophie Himbaut
Info and sales conditions
Catalogue
Newsfeed
See all news
The Seattle Art Museum Announces Major Overhaul of its American Galleries
Paris Tribal Returns to Saint-Germain-des-Prés in Paris
Artists and Activists Criticize Hungary’s New Anti-LGBTQ+ Legislation
Looted Maqdala Withdrawn from Auction to Return to Ethiopia
Not to be missed
Lots sold
Majestic Illuminated Books of Hours Shine at Auction
Here, the vitality of French 15 th - and 16 th -century illumination…
Lots sold
Childhood’s Green Paradises by Vietnamese Artist Mai…
Like a prelude to an exhibition, this sale featured a particularly…
Lots sold
Bernar Venet and the Vitality of Modern Drawings
Works by Bernar Venet, Le Corbusier, Zao Wou Ki and Vieira da Silva…
Lots sold
Simon Hantaï: The Art of Blue
There were various aspects to this classic sale, but a memory in…