With this hitherto unknown sanguine by the master, his very small corpus of male nudes is enriched by an invaluable work. It will also be a grand first in the auction room, since the only known male figures by the master are all in museums. 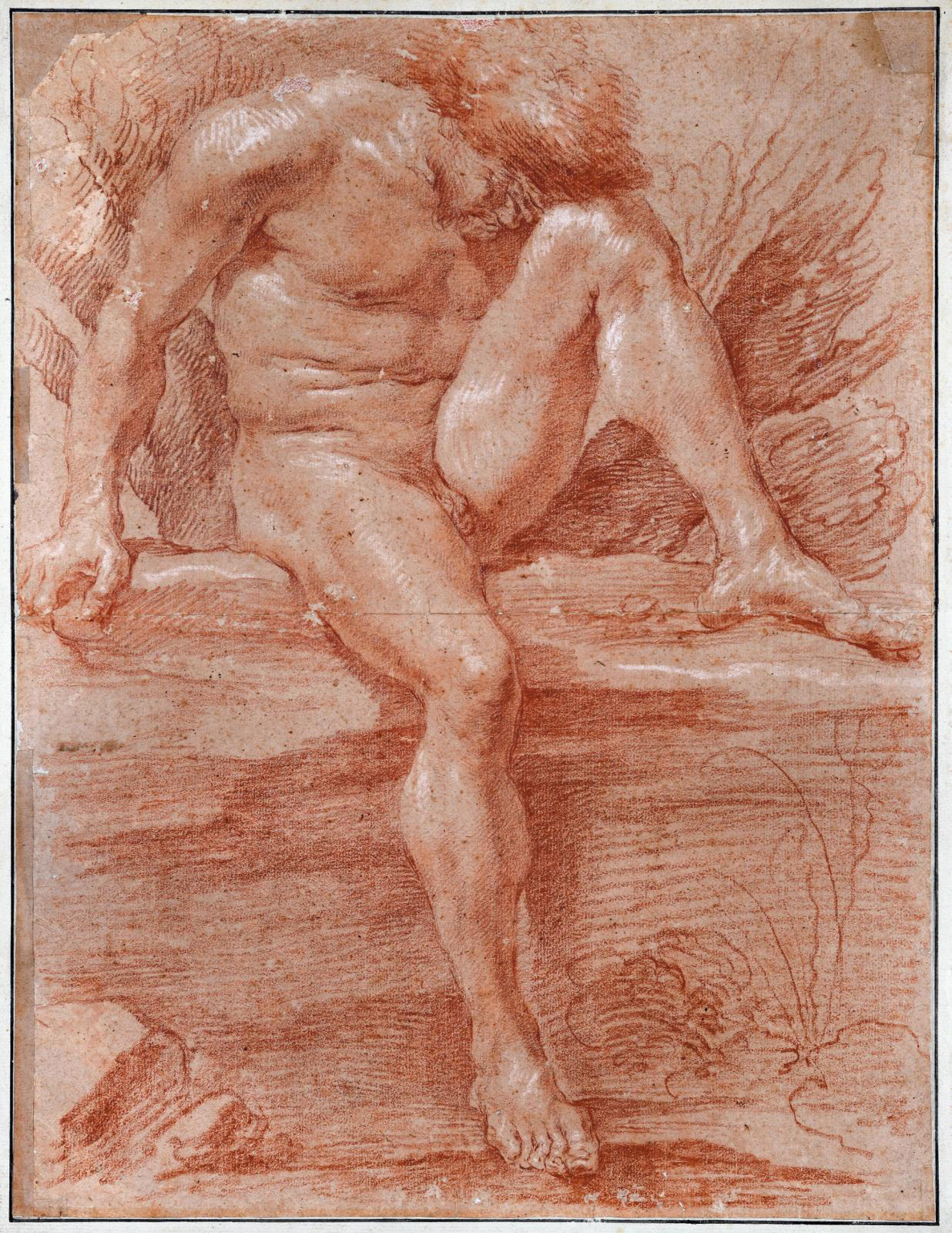 A hunched man tries to stretch out his naked athletic body, as if cramped by the restrictions of the paper. To achieve this, he grips the edge of the rock on which he is sitting. Everything in this drawing executed in sanguine with light white chalk highlights betrays the hand of a great artist of the Baroque era, used to dealing with sturdy bodies. When this extraordinary work was discovered in a private collection in Compiègne by Dominique Le Coënt de Beaulieu and Philomène Wolf, its former mount featured a cartouche with an attribution to Pierre Puget. But because of the technique used for this nude, the French sculptor was soon ruled out. For their part, the experts of the Cabinet Bayser set off on the trail for an Italian, having specifically noted the frequent use of red chalk hatching to outline the contours of the subject.

This remarkable treatment, which "makes the flesh vibrant and imbues its model with expressive vitality," as Patrick de Bayser puts it, seems to point to one name: Gian Lorenzo Bernini. When contacted, Ann Sutherland Harris, a specialist in the Roman artist and author of the only reference work on his drawings (Dover Publications, New York, 1977), unhesitatingly confirmed the illustrious paternity. Thanks to this invaluable compilation, we learn that seven other nude males exist, all now in museums, presenting strong similarities with the Compiègne drawing. These concern not only their subject matter, of course—muscular models in a mineral setting who always seem constrained by the frame—but also various technical characteristics like the large size, as with the one here 56 x 42.5 cm (22 x 16.7 in).

A Link with a Famous Fountain?
Another decisive clue, visible on the surface of the support, is "this median crease recurrent in Bernini's work, caused by the paper's being dried on a wire after it was made," says Philomène Wolf. Two very similar drawings stand out from the few extant works: one in the Uffizi in Florence, the other in the Teylers Museum in Haarlem, in the Netherlands, which came from the collection of Christina, Queen of Sweden (1626-1689). The eighth of its kind, this bravura piece is thus one of a homogeneous series. And since Bernini was above all a sculptor and architect, this one may have preceded some large-scale project. For Patrick de Bayser, "without being true preparatory drawings, this series of male nudes could well have influenced Bernini in creating the figures for the Piazza Navona fountain in Rome." The Compiègne athlete's pose certainly evokes the attitude of the four bearded statues representing rivers in this Baroque monument inaugurated on June 21, 1651. There too, the Nile, the Ganges, the Rio de la Plata and the Danube, sitting somewhat precariously, have no other option than to cling to their rocks, one foot in the void…

ACTEON'S TREASURES IN CAMERA SALE
Compiègne - 18, rue des Cordeliers - 60200
Actéon - Compiègne Enchères
Info and sales conditions
Catalogue
Newsfeed
See all news
Work Finishes on the Medieval Guildo Château on Brittany’s Coast
Never-Before-Seen Ceiling Painting by Eugène Lami Discovered at Château de Chantilly
Largest Ever Exhibition of Bob Dylan’s Artwork to Debut this November in Miami
Stockholm University Archaeologists Uncover Moat in the Viking Town of Birka
Not to be missed
Pre-sale
The Truly Sculptural "Crash" Watch by Cartier
Cartier's "Crash" watch is legendary for not only an extraordinary…
Pre-sale
Bernard Buffet in Amiens
Accompanied by a certificate of authenticity from the Maurice Garnier…
Pre-sale
Emile Claus Tames the Thames
Often classified as a painter of rural life, Belgian artist Émile…
Pre-sale
On the High Seas with Marin-Marie
Marin-Marie, an outstanding seascape artist, appears once more at…