Banksy has been a troublemaker in the art market for some fifteen years, using anonymity and attention-grabbing events to push up his price index, despite his denials. This stencil could well benefit. 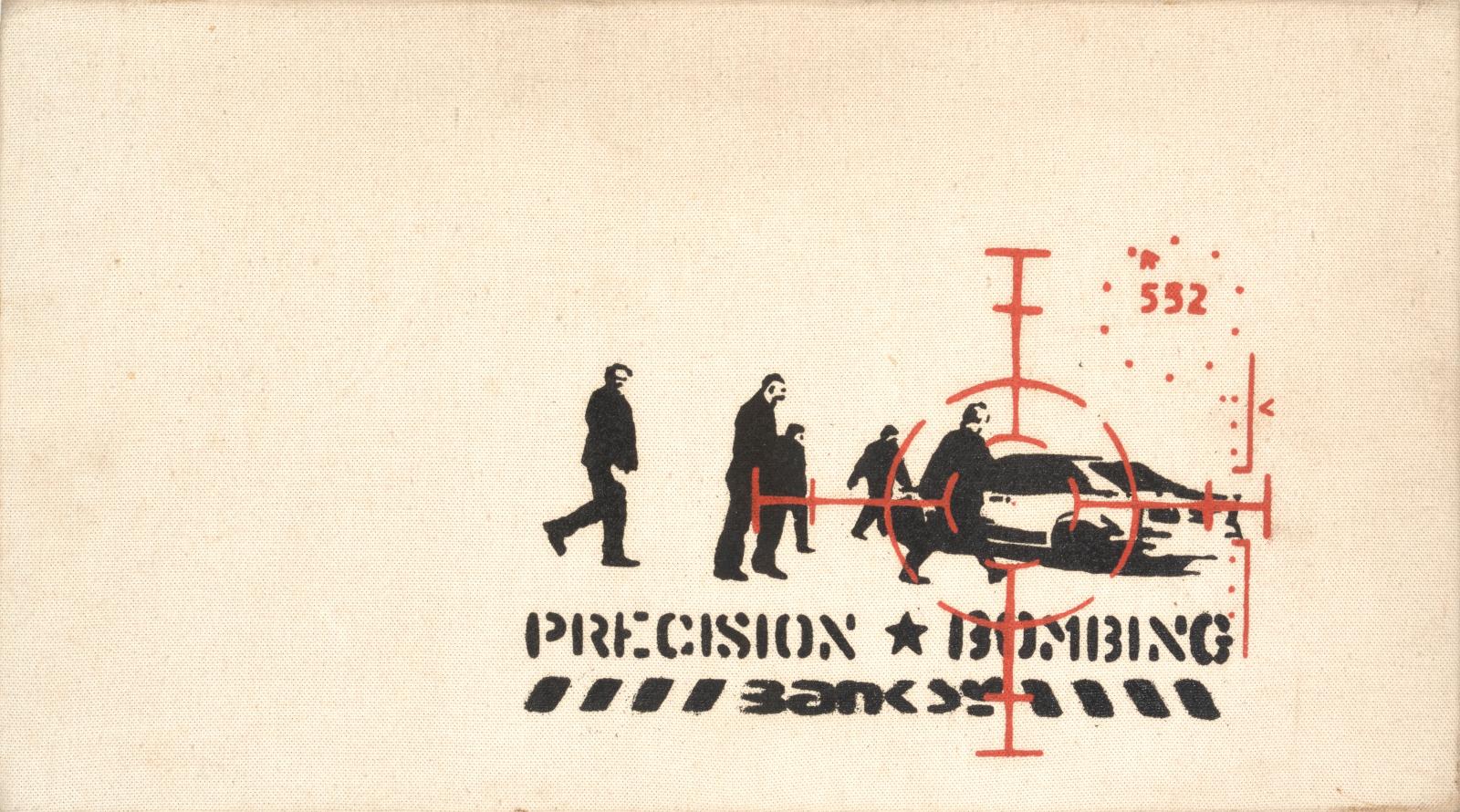 Just as Banksy has set a new world record (on 3 October for Devolved Parliament, sold in London for £9.91 M), no fewer than eleven of his works are appearing in a sale at Drouot entirely devoted to urban art. This stencil dating from 2000 is the acme. Entitled Precision Bombing, it shows a group of men about to get into a car locked in the crosshair of a gun, where the viewer is right in the marksman's position. Disturbing?  Undoubtedly, especially since the title refers to a military tactic developed during the very first air raids designed to limit collateral damage and the number of victims. In other words, the myth of "clean war" sold with a vengeance (and with all the limitations we know so well) by the American military HQ on CNN during the Gulf War… With Banksy, of course, guerillas are urban: this stencil first appeared on the wall of a London street. The stencil is the artist's favourite modus operandi as a technique enabling him to work rapidly anywhere, including on canvas, as here – a Precision Bombing which is in fact the only one of its kind in this format.

URBAN CONTEMPORARY ART
Salle 1 - Drouot-Richelieu - 9, rue Drouot - 75009
Digard Auction
Info and sales conditions
Catalogue
Salerooms
Results
Newsfeed
See all news
Due to the summer holidays there will be a pause in the newsfeed. We will be back Monday, August 24th. Have a wonderful summer vacation!
Met Museum in New York acquires Wangechi Mutu sculptures
US House of Representatives vote to create a national museum dedicated to Latin Americans
Church volunteer confesses to starting the Nantes Cathedral fire
Not to be missed
Pre-sale
Figurative art from van Goyen to Combas and the inescapable…
This 1955 work by Bernard Buffet belongs to a series of around 10…
Pre-sale
Henri Lebasque, painting the zest for life
His soft, nuanced palette captures moments of simple happiness on…
Pre-sale
The Gilles Labrosse collection: fashion throughout the…
Amassed by an impassioned enthusiast, one of the largest private…
Pre-sale
Achille Laugé: Cailhau in perspective
Found during an inventory carried out for an estate in the Var,…