The unique light of Giverny

Mainly found in sales across the Atlantic, Karl Albert Buehr is soon coming to Cannes with an intimist scene in the highly appealing line of American artists close to Claude Monet. 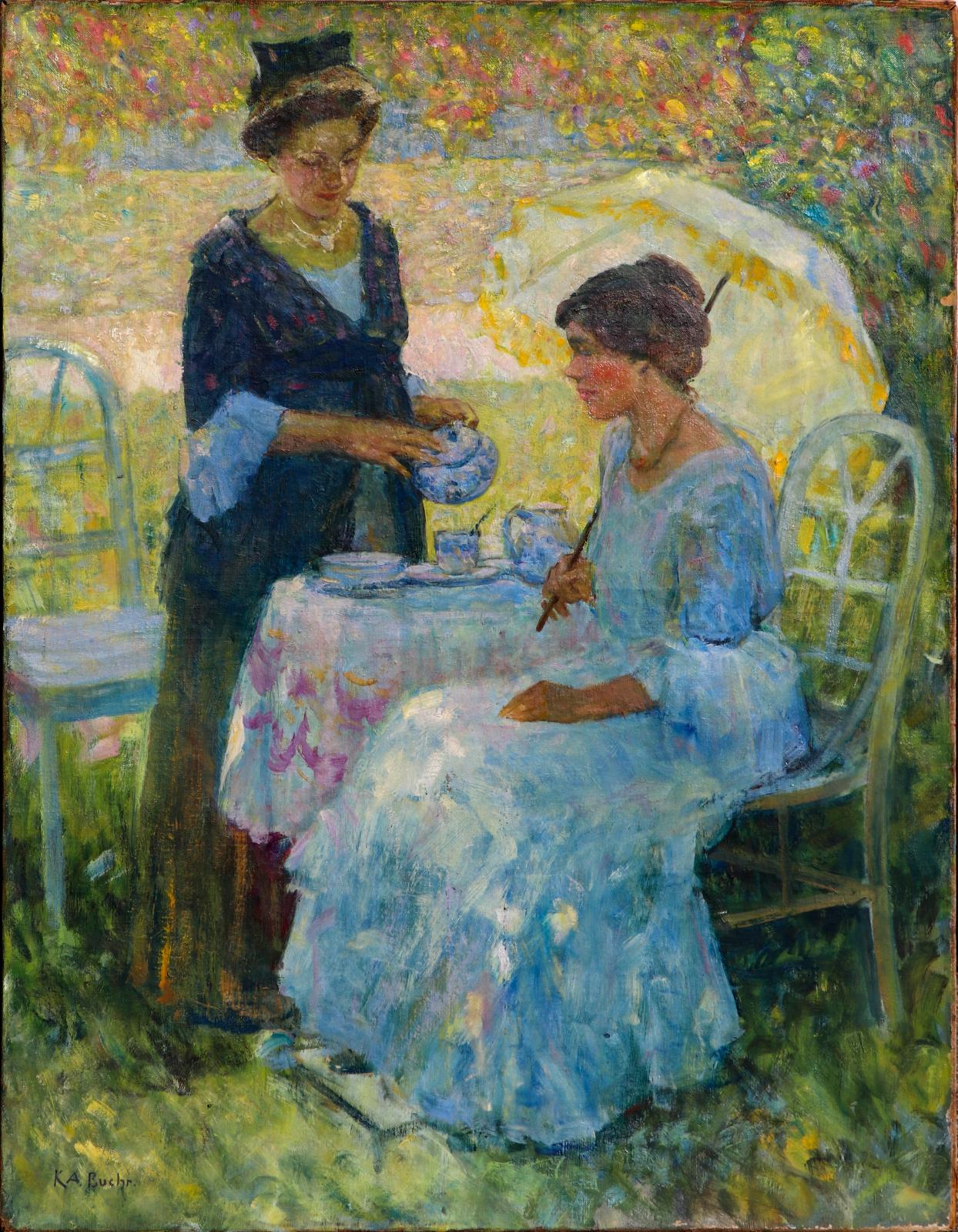 According to Artprice, no pictures by Karl-Albert Buehr have been auctioned in Europe for some fifteen years. In the US, one of his paintings, On the Terrace, was knocked down on 7 March 2008 at Christie's New York for $409,000 (€303,978 at today's value). Though slightly smaller (71.1 x 91.4 cm), it has similarities with the one on offer at Cannes, which comes from a private Monaco collection and went through the Byron Gallery in New York. Both works depict women at tea-time; the one here is set beneath shady trees, and features the same green metal chairs. Both pictures were painted in Giverny in around 1910. Karl-Albert Buehr was then staying in the middle of this Normandy village, where a colony of American painters, led by Willard Leroy Metcalf, had been established since 1886, not far from the father of Impressionism. Buehr was great friends with Monet, and their daughter and granddaughter played together regularly.

The "Givernyites"
In Giverny, Karl-Albert Buehr discovered the unique light that structured his paintings, largely devoted to intimist scenes showing dreamy women in shimmering gardens – a theme reminiscent of other American artists like Frederick Frieseke, Lawton Parker and especially Richard Edward Miller. They all belonged to the third generation of "Givernyites", who exhibited in New York in 1910. They would frequently paint together in the garden of "Le Hamlet", a house close to Monet's rented by Mary C. Wheeler, the founder of an avant-garde school in Providence (Rhodes Island). Buehr was particularly close to Miller. They met in Paris at the Académie Julian: a school that became famous for admitting women and foreign artists very early on. Miller had been in France for seven years when Buehr appeared in 1905. Supported by a patron, the 39-year-old artist arrived with his wife and children, and the kudos of a bronze medal obtained at the Universal Exhibition in Saint Louis (Missouri) the previous year. After he returned to America at the beginning of the First World War, he became a teacher on the strength of his flawless mastery of light, which had earned him an international reputation.

Type Modern
Cannes - 20, rue Jean-Jaurès - 06400
Cannes Enchères
Info and sales conditions
Catalogue
News feed
See all news
Planning for new museum dedicated to Le Corbusier begins
Virginia Museum of Fine Arts receives gift of over 8,000 Aaron Siskind photographs
Banker sentenced to jailtime for trying to smuggle a Picasso out of Spain
Domaine Royal de Marly museum, the Sun King’s hideaway, reopens
Not to be missed
Pre-sale
A new Ribera on the market
After Cimabue, Artemisia and the Master of Vyšší Brod, Paris is…
Pre-sale
The world revealed at last
This composite atlas printed in Nuremberg between 1753 and 1759…
Pre-sale
Picasso and the Minotaur
Through a complex iconography, Pablo Picasso exorcises his angst…
Pre-sale
The Brölemanns, Lyon bibliophiles
Kept in the same family until today, 260 works attest to the bibliophilic…