Rare on the European market, the work of Colombian artist Olga de Amaral will soon be revealed through this painted textile decorated with gold leaf. 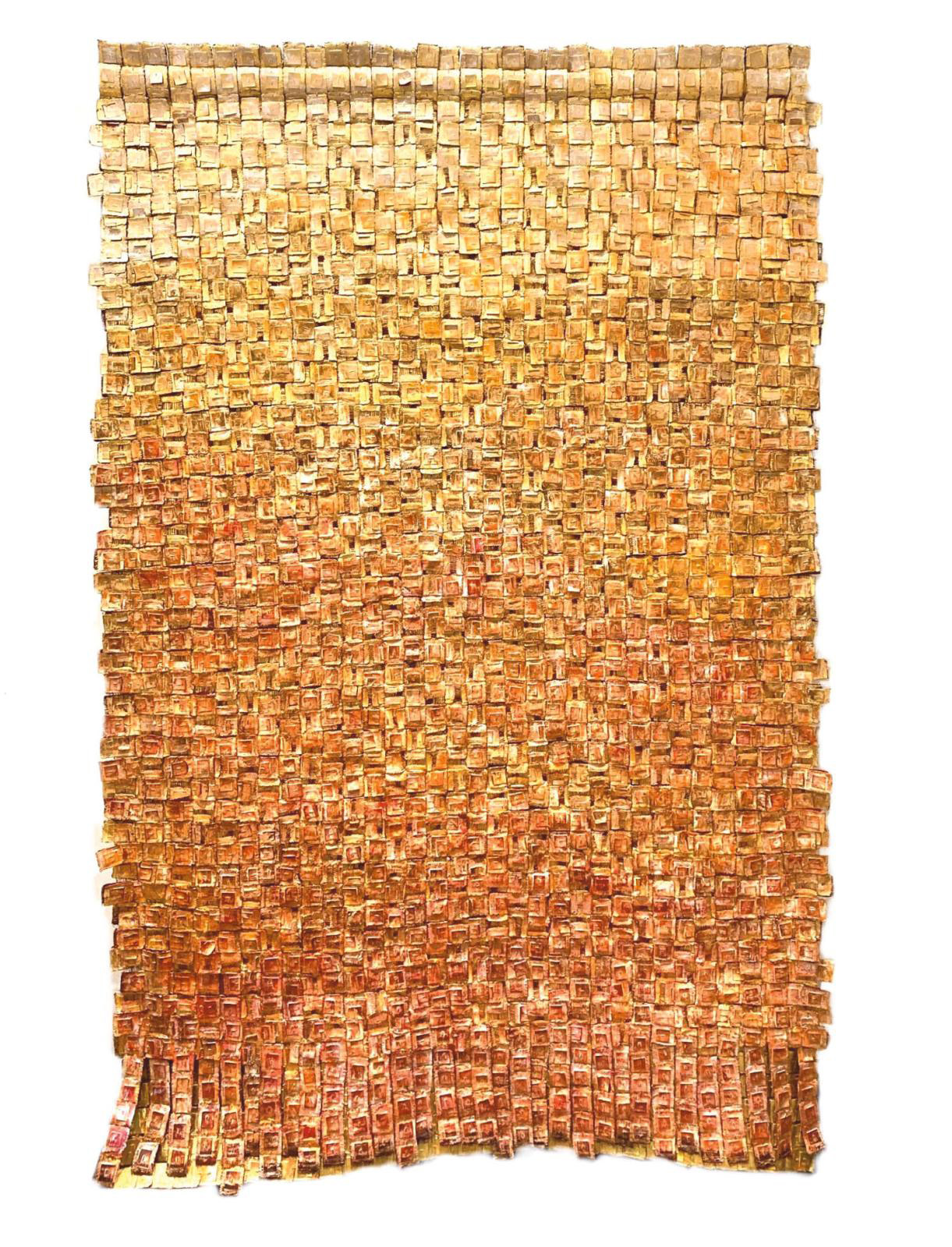 Until recently, this creation adorned the movie theater on the Pelorus. This luxury yacht was commissioned in 2004, with the famous Russian billionaire Roman Abramovich at the helm, before being sold in 2011 to American music and movie producer David Geffen. Its decoration was also truly exceptional. All the talents of Colombian artist Olga de Amaral are illustrated in this fabric piece which stands almost 1 m. 40/ 4.5 ft. high. "I started working with fiber by chance—a studied coincidence—and I continued because it never disappointed me," she said.

Born in Bogota, where she studied architecture, Olga de Amaral moved to New York in 1954 to perfect her English at Columbia University. Before the end of the year, she entered the Cranbrook Academy of Art in Michigan, where she first explored the world of fiber. There she discovered "a raison d’être, a vision of the world, a way of life", which found a particular echo in Colombian folk art when she returned to her country. She became fascinated by traditional weaving techniques and artisanal crafts, and was inspired by the white and black clothes of the Arhuacos Indians and Amazonian vegetable fiber baskets. Abandoning the loom, she soon turned to the hand-knotted carpet technique, then to high warp weaving, which led to a new perception of the third dimension in her creations. She produced her own yarns, with just the right thickness to make her hangings imposing and even more tactile. She rapidly made an international name for herself, with support from textile designer Jack Lenor Larsen. She participated in Biennials, worked in New York with Eileen Vanderbilt of the World Crafts Council, then spent some time in Paris in the mid-1970s. There she discovered the use of gold, which became one of her trademarks. Her work is exhibited around the world, swelling the collections of dozens of museums, and her fabrics achieve six-figure bids in New York auction houses. A good omen for this major piece.

Trésors 2021
Hôtel des Ventes de Bordeaux Tourny - 38, rue Lafaurie-de-Monbadon - 33000
Emmanuel Layan & Associés
Info and sales conditions
Catalogue
Newsfeed
See all news
We will be on vacation from July 23rd - August 23rd. Wishing you a great summer and see you in September!
Santiago Caltrava Renovates San Gennaro Church in Naples
50% Funding Cuts for Arts and Design Courses Approved by UK Government
Instagram’s New “Sensitive Content” Controls Cause Concern Amongst Artists
Not to be missed
Pre-sale
Under the Protection of Maahes: A Rare Egyptian Bron…
This well-sized bronze statuette dating from Egypt’s Late Period…
Pre-sale
The Op Art of Vasarely and the Discourse of Descarte…
This painting by the master of optical art has never come up for…
Pre-sale
Lalanne and the Charging Rhinoceros
This bronze sculpture with an enamel patina, which is from a private…
Pre-sale
From the Abstraction of Viallat to the Silk Paintings…
Two worlds will come together in Nîmes: those of Vietnamese painter…