A Renaissance Lamb with Biblical Overtones

An Italian Renaissance artist sculpted this pure, innocent, naturalistic lamb, which may be a unique piece with powerful religious symbolism. 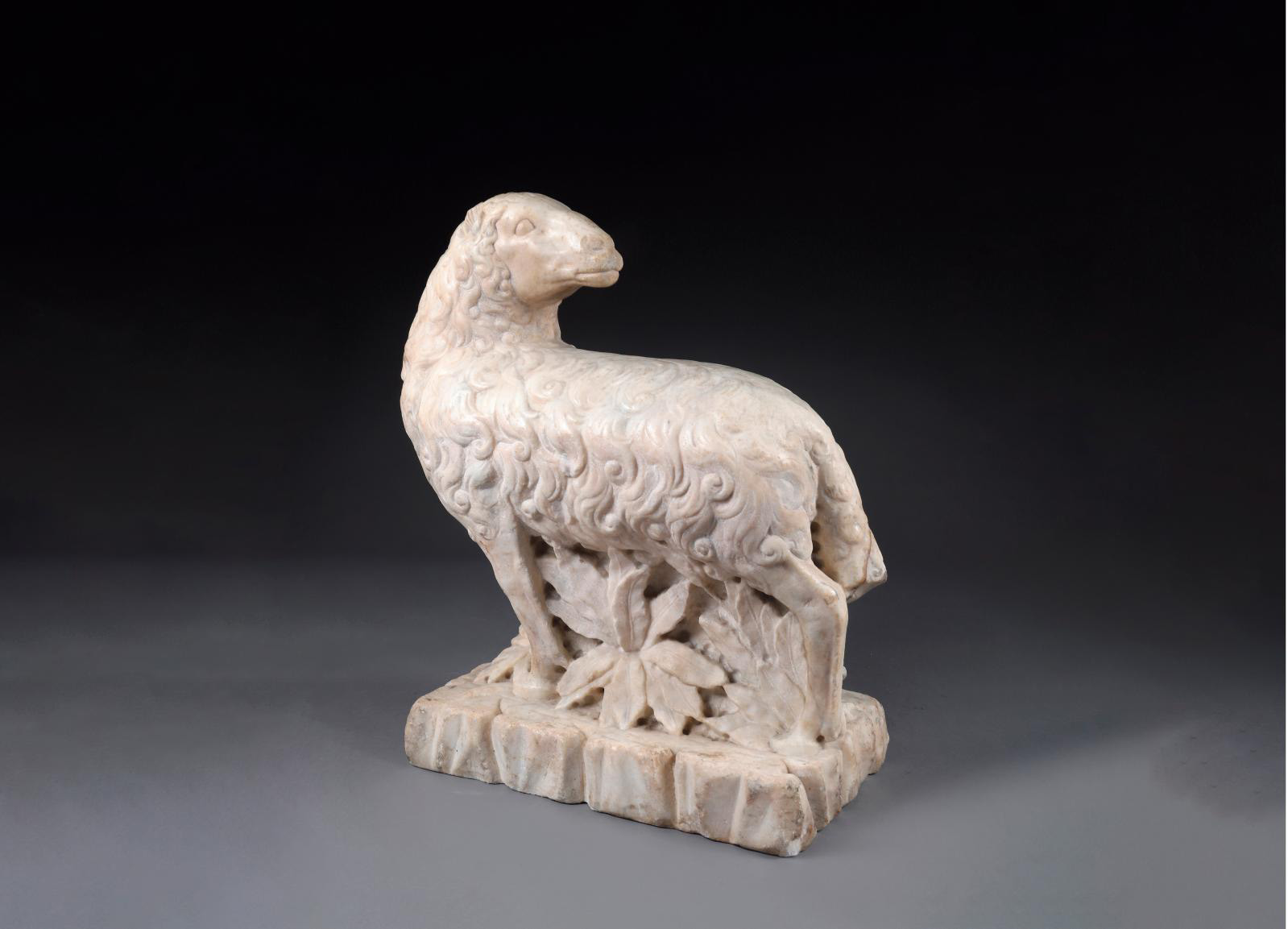 It is not really known why this marble lamb was carved in Renaissance Italy—in the 15th or 16thcentury; it's hard to be more precise—but religious history and clues left by the anonymous sculptor might shed some light on the subject. The white fleece is slightly worn, suggesting that this was a devotional object caressed by the faithful—an uncommon practice, even if the gentle creature had a highly symbolic value in Judaism and catholicism. The Paschal lamb, symbolizing Christ as the "Lamb of God", is clearly evoked here. It holds an unobtrusive pomegranate between its feet—a fruit that symbolized the union of Christians in a single faith. The work was carved in the round from a single block of stone, which means it was not intended to be placed in a niche and did not belong to a larger group. It is a stand-alone sculpture. One plausible theory could be that it was intended for display at Easter or even carried in Holy Week processions. The lamb was very important during this period in the liturgical calendar and essential for the faithful.

Unique in more ways than one
The long story recounted in the Old Testament began on the night the Hebrews were freed from bondage in Egypt. Lamb was the last meal they ate before fleeing. They dabbed the animal’s blood on their door lintels so that the Lord could recognize them and spare their newborns during the last plague. That is when its meat acquired the taste of freedom and its blood proved that God loved his people. It is also why Jews commemorate their arrival in the Promised Land every year. Over a millennium later, Jesus was crucified at the sixth hour—the exact time that lambs were sacrificed for Passover in the Temple. The Crucifixion was the ultimate destiny of the Paschal lamb, who died to save men’s souls and redeem their sins. In the Gospel according to Saint John, John the Baptist sees Jesus walking towards him and says, “Behold the Lamb of God, who taketh away the sins of the world.” The lamb was the symbol of Easter for centuries, which is why it so often appears in religious iconography, illuminated in Books of Hours, painted by artists of the early schools, carried in the arms of statues of Saint John, accompanying a shepherd, and sometimes even bearing a cross (Agnus Dei), as on a keystone at Cluny Abbey. But it is seldom alone, especially one of this size and high-quality craftsmanship.

All of these clues suggest to the expert that this is a unique piece—an additional reason to contemplate the inscription carved around the Cluny sculpture: “In heaven I am great, but here I am the size of a little lamb.”

Pompon, King of the Forest

This bronze by François Pompon is from a 1930 group of ten copies. It belongs to his last great sculptures of quadrupeds. 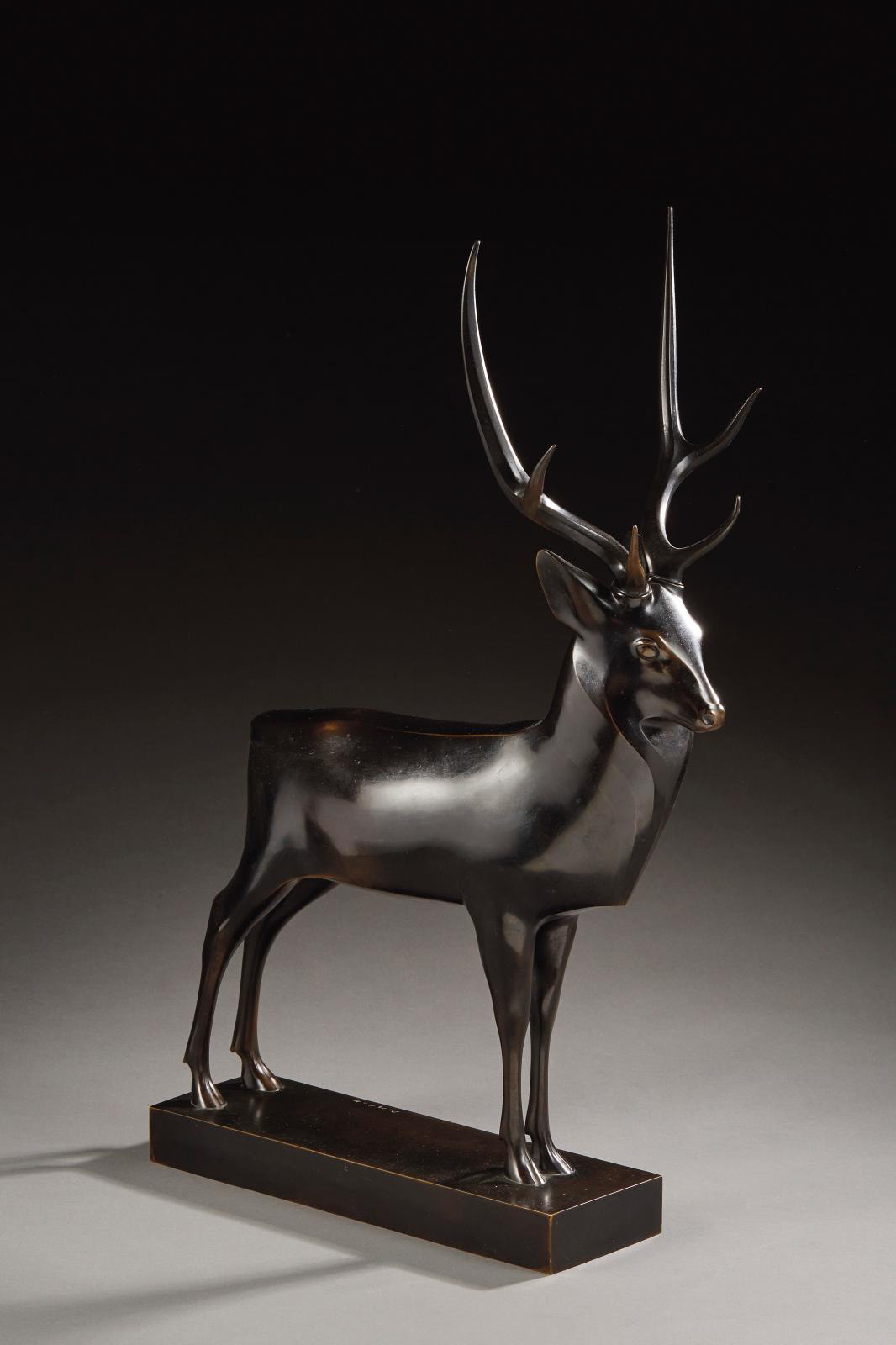 In 1929 an industrialist commissioned Le Grand Cerf (The Great Stag), a signature sculpture with simplified forms by François Pompon, for his estate in Momères in the Hautes-Pyrénées. Cast in sand by Andro, it was the highlight of the Salon d'automne (a one-off proof, it is now at the Piscine in Roubaix). The following year, the Burgundian sculptor had the same foundry cast several 60-centimeter (23.6 in) reductions, including ours. The original plaster cast was given to the Louvre in 1934, but today it can be seen in the Musée d'Orsay.

Pompon recounted a decisive encounter with the stag: "I made sketches of him grazing, munching and running. But one day he was transfigured right before my eyes. He was plucking up a few meager tufts of dusty grass when a Republican Guard regiment came by. Suddenly music played. Then I witnessed this: in two strides he charged the gate of the quai Saint-Bernard. Rearing up to his full height, he pressed his chest against it and growled. Darting towards the brass instruments, his whole being quivered [...] I had the impression that he was a god."