With this The Agile Rabbit in the Snow, the eulogist of La Butte gets ahead of the season as he highlights the district he loved, which shaped his life and career. 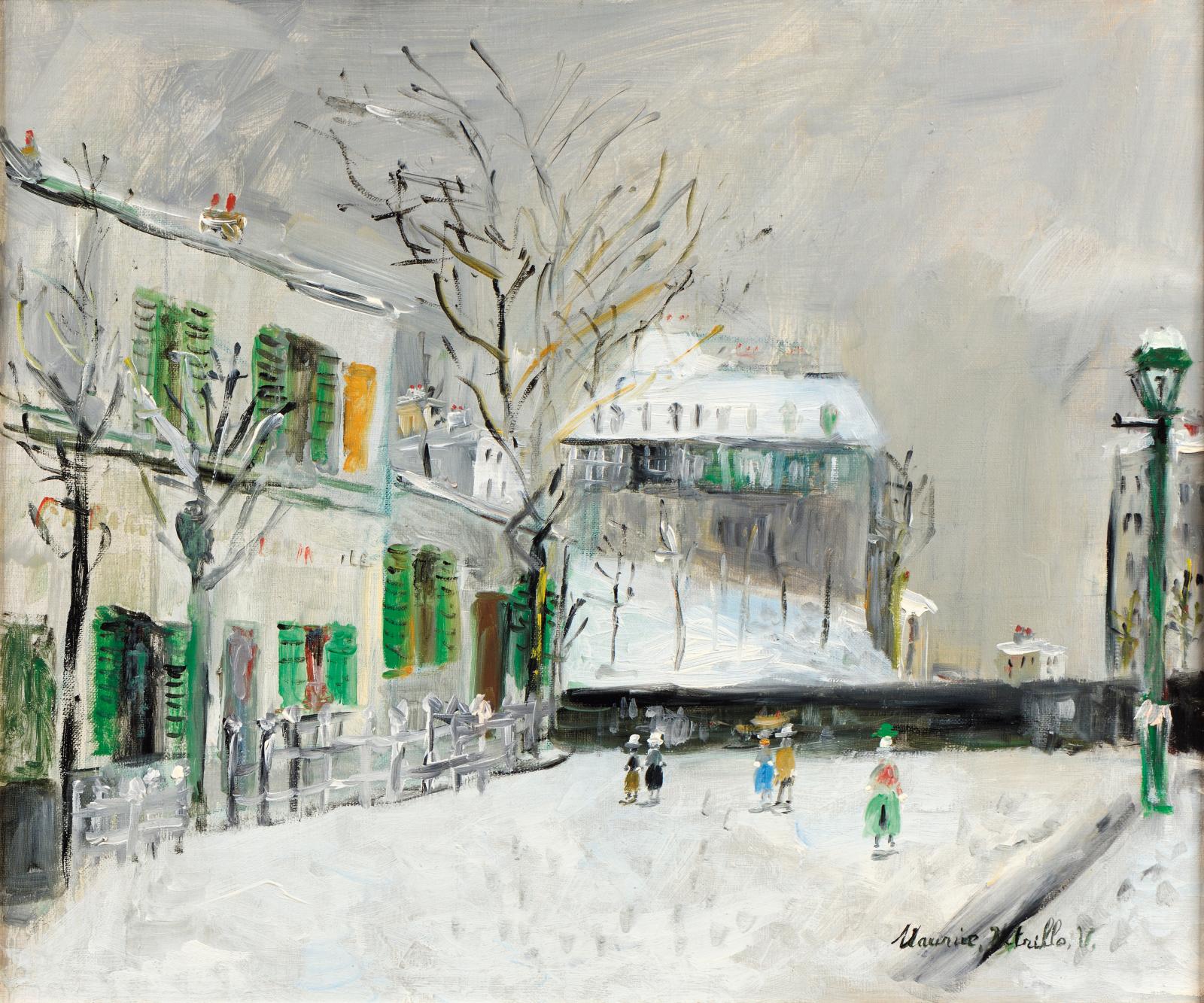 Here, painting was therapy. Maurice Utrillo sought to conquer his malady, alcoholism, by pacing the streets of his beloved Butte Montmartre. The Sacré-Cœur, the Moulin de la Galette, Rue du Mont-Cenis and the cabarets La Belle Gabrielle and, of course, the Lapin Agile were some of the subjects he endlessly explored. At that time, recently annexed to the City of Paris, Montmartre was the flashpoint for the Paris Commune in 1870. The legendary neighbourhood was also the haunt of turn-of-the-century artists like Toulouse-Lautrec, Bruant, Picasso, Modigliani and Pissarro, who came in search of the pure air and the cheap wine served in the numerous cabarets at the foot of Montmartre. Created in the late 18th century in the district's high area, the Cabaret des Assassins changed its name after the caricaturist André Gill designed a new sign for it featuring a rabbit, which became "Le Lapin à Gill" (Gill's rabbit) and then "Le Lapin Agile" (The Agile Rabbit). The former cancan dancer Adèle Decerf, then Berthe Sébource and as from 1903, Frédéric Gérard, made it into a popular meeting place where Apollinaire read his poems and Picasso painted portraits. Utrillo was also a devoted regular and painted the café many times, mostly from the Rue Saint-Vincent side with its rising perspective. But with this picture, listed in the catalogue raisonné under no. 2303, his vantage point was in Rue des Saules, showing the side with the cabaret's green shutters where the sign was barely visible. Here he could focus on passers-by and above all depict the snow shrouding the roofs, trees and ground in white. Although the painting does not date from his "white period" (1910 to 1914) but probably from the much more colourful 1930s, Utrillo once more took up the wintry landscape so popular with his admirers and thus much requested by his dealer, Paul Pétridès. He used a highly original method to render this luminous white, working with a thick impasto incorporating plaster, whitewash and sand, which enabled him to obtain variations in shade – here, for example, reflecting the grey of the lowering sky. Over the years, his treatment of figures became more cursory, even simplistic. However, he always produced keenly observed compositions served by his masterly skill with linear rhythm and colour, and remained true to his almost naive vision of the labyrinthine Montmartre district with its fascinating spots.

tableaux modernes, mobilier et objets d'art, sculptures
Mâcon - 1, avenue Édouard-Herriot - 71000
Quai des Enchères
Info and sales conditions
Newsfeed
See all news
The Eva Hober gallery closes for good
The French budget dedicated to culture will increase by 4.8% in 2021.
Arrests in the robbery and vandalism of the Church of Sant’Agata a Collegio in Sicily
Thyssen-Bornemisza Art Contemporary (TBA21) launches online platform: st_age
Not to be missed
Pre-sale
Hector Guimard: the essence of Art Nouveau
Though no introduction is needed for Hector Guimard, architect of…
Pre-sale
A painting by Jean-Léon Gérôme from the Moreau-Nélaton…
Last seen in 1900, this landscape of Paestum with a remarkable pedigree…
Pre-sale
An unpublished and mysterious envoi by Stendhal
This copy of Le Rouge et le Noir ( The Red and the Bl ack) is an…
Pre-sale
Master cabinetmaker Charles Topino’s trademark
The furniture-maker’s signature pieces included small Transition-style…