Caillebotte in his garden

In 1881, Gustave Caillebotte created a garden on his estate in Petit-Gennevilliers. As this oil on canvas offered at Drouot, the flowers and vegetable garden became the subjects of his paintings. 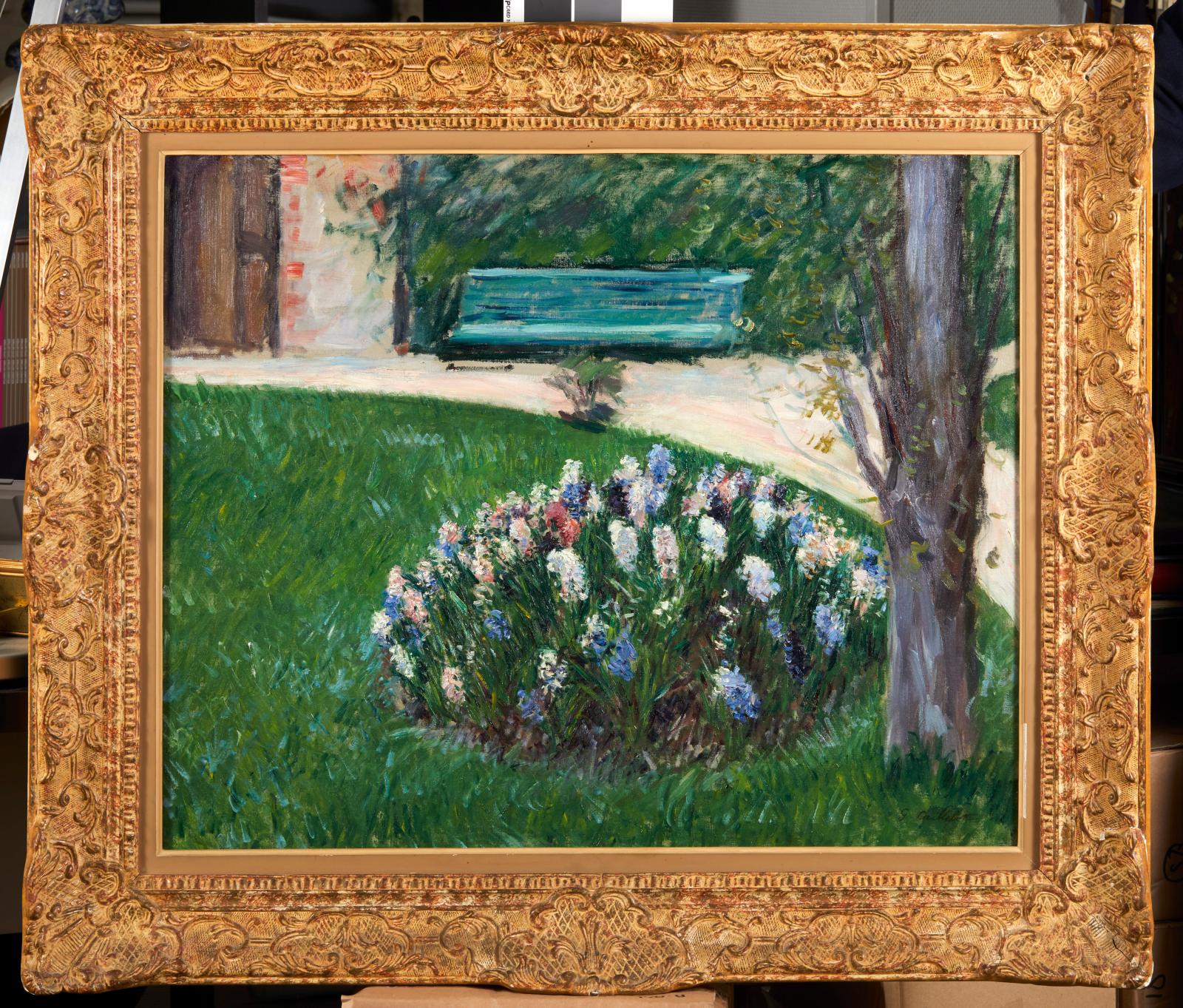 Hyacinths perfume the spring air, mostly grouped together in round flower beds where purplish and Delft blues, pinks and whites harmoniously mingle. They were a familiar sight to Caillebotte, who spent his holidays on the family estate in Yerres. His brother Martial sold this painting to Ambroise Vollard. In the 19th century, it was common for the wealthy bourgeoisie to plant gardens around their houses. Orchards, vegetable gardens, flower beds, greenhouses and rose gardens graced the grounds, allowing the owners to enjoy the spectacle of the changing seasons and the beauty of nature. At first Caillebotte joined the Impressionists and painted Haussmannian Paris, boaters on the Yerres and views of the family estate, which was sold in June 1879. Shortly afterwards, Gustave and Martial bought a smaller property in Petit-Gennevilliers, opposite Argenteuil, to which the painter had been introduced by Manet, who entertained Monet and Renoir in the house he owned there. Gustave designed the garden, drawing up the plans and perspectives himself, making flowers spring from the ground. When Martial was married in 1887, he bought out his share and acquired land nearby, building a studio and greenhouses for his orchids and rare flowers the following year. He painted some 500 pictures in this period, poorly known until the 2016 show "Caillebotte, Painter and Gardener" at the Giverny Museum of Impressionisms. Most were of his garden, surrounding landscapes and the banks of the Seine adjoining his land. "He got his hands dirty, like Monet," says the show’s curator, Marina Ferretti. “They considered themselves gardeners, wrote to each other a lot during that time and spoke mainly about greenhouses, automatic sprinkling systems, bulbs and flower shows in their letters." Caillebotte painted this lush garden of flowers grouped together in large beds almost in close-up, like Monet and his water lilies. The garden has since vanished, gobbled up by industrialisation.

Tableaux modernes et contemporains
Salle 6 - Drouot-Richelieu - 9, rue Drouot - 75009
Auction Art Rémy Le Fur & Associés
Info and sales conditions
Catalogue
Results
News feed
See all news
Nxt Museum for new media art set to open in Amsterdam this August
Uffizi Gallery Director suggests the return of religious art back to churches
The Walker Art Museum shelves contract with Minneapolis police
Severe storm causes superficial damage to the Taj Mahal
Not to be missed
Pre-sale
Lacloche: a glittering company
For nearly seventy years, Lacloche once a leader in the jewellery…
Pre-sale
From Bonnefond's idealised Italy to Braque's still life…
Each of them continually experimented with their art and broke new…
Pre-sale
Buthaud revisits the "verre églomisé" technique
In Bordeaux, a remarkable set of twelve eglomised glass or verre…
Pre-sale
Fernand Léger in Corsica
Given by the artist to his model, Ernest Blasini, this portrait…