The People of Brittany by Lucien Simon

An incomparable witness of the Bigouden people on the threshold of major changes, here the painter delivers a powerfully modern and sensual composition. 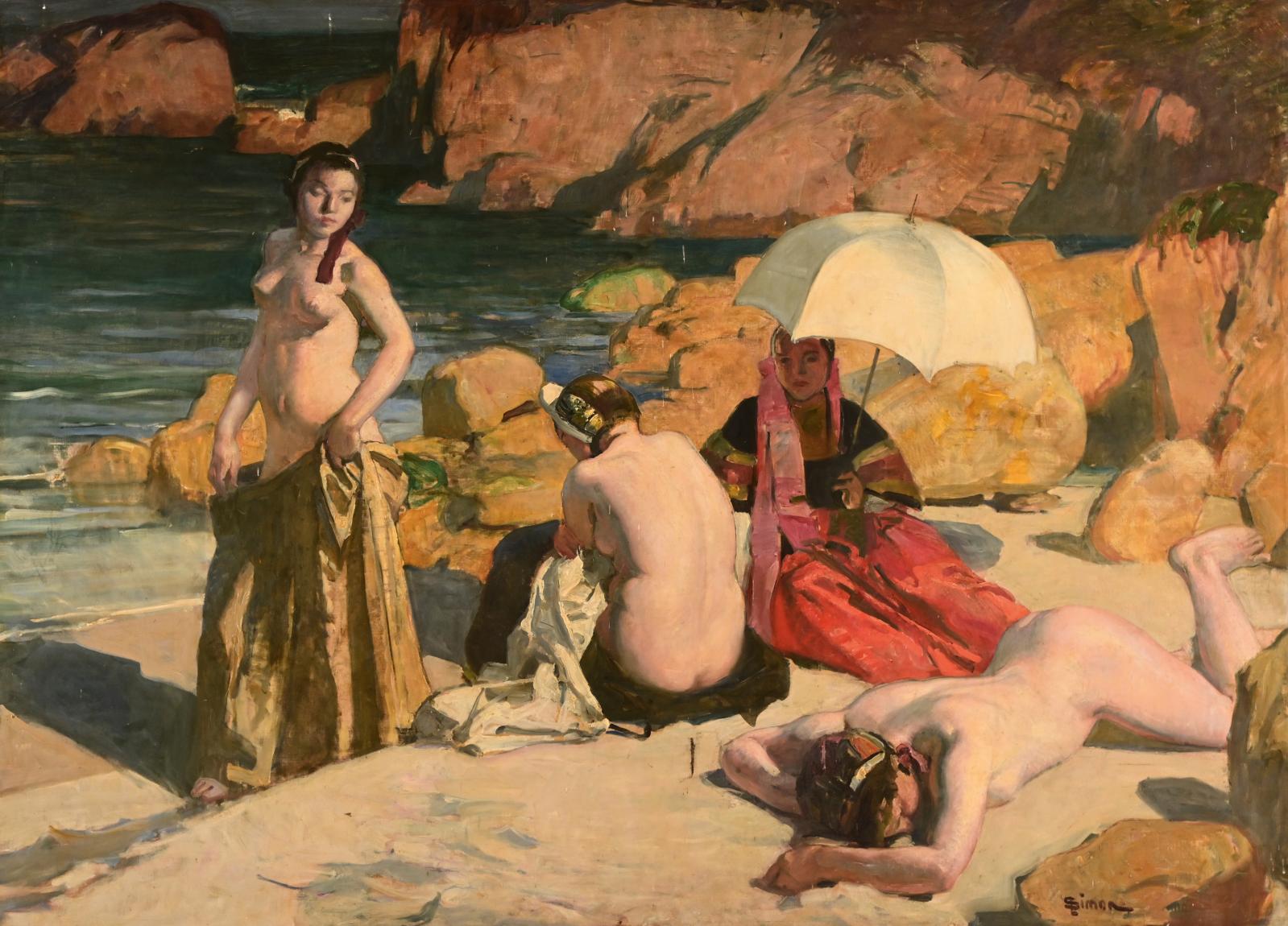 With a soft blue-green sea, rocks shining in golden splendor and light sculpting the naked bodies abandoned to the sun, as well as the still clothed figure beneath a parasol, it is clear what appealed to the painter Lucien Simon and made him constantly return to the Brittany, France, he discovered through his marriage to Jeanne Dauchez. In 1902, he bought an old disused signal station at Sainte-Marine, where he just had to open the windows to see the Bigouden region on the banks of the Odet and its inhabitants. Dressed in their richly embroidered costumes, they arrested his gaze and filled him with inspiration. He was one of the first people to truly look at them.

In this docking port, which became a haven for his family and friends, he would sketch large watercolors, capturing fleeting moments with a masterful technique. Then, back in his modernist Parisian studio on the Rue Cassini, he would work on his paintings at leisure. One was this Baigneuses bretonnes dans les rochers (Breton Women Bathing Among the Rocks) dated 1913, presented at the Salon de la Société Nationale des Beaux-Arts in 1914 and probably bought by the Bernheim Jeune Gallery the same year. "It was highly original on his part to observe Brittany in this way, while literature and contemporary art approached it with religious reverence." Never were the critic Louis F. Aubert's words more clearly illustrated than in this work. For though his artistry is powerful, there are no calvaries, patrons saints or saints in granite; no seaweed harvesters, potato pickers or women leaving the church after Mass. There is not a whiff of religiosity in these Bigouden women, who have briefly forgotten their work and their harsh existence and abandoned themselves to the reviving sun on a summer's day. Simon, that passionate observer of daily life, certainly relished giving them this instant of respite.

Here he drew inspiration from the great masters of the past who had so deeply influenced him and awoken his awareness as a painter. While his well-known debt to Rubens is evident here, there is also a distinct hint of the French academic painter Dominique Ingres (1780-1867) in the back of his enchanting Bigouden odalisque. Yet he moved beyond this artistic precedent even as he claimed it, unleashing a palette of pinks and yellows with virtuosic skill, while letting the light shine through. He gave a specific context and a life of their own to these four young women, indifferent to the artist immortalizing them. Brittany gave his vigorous talent with its broad, deliberate style the means to express an extraordinary gift for observation.