"The rooster, the donkey and the lovers " could be the name of this one, where personal history, patriotism and religion mingle in a colourful waltz. 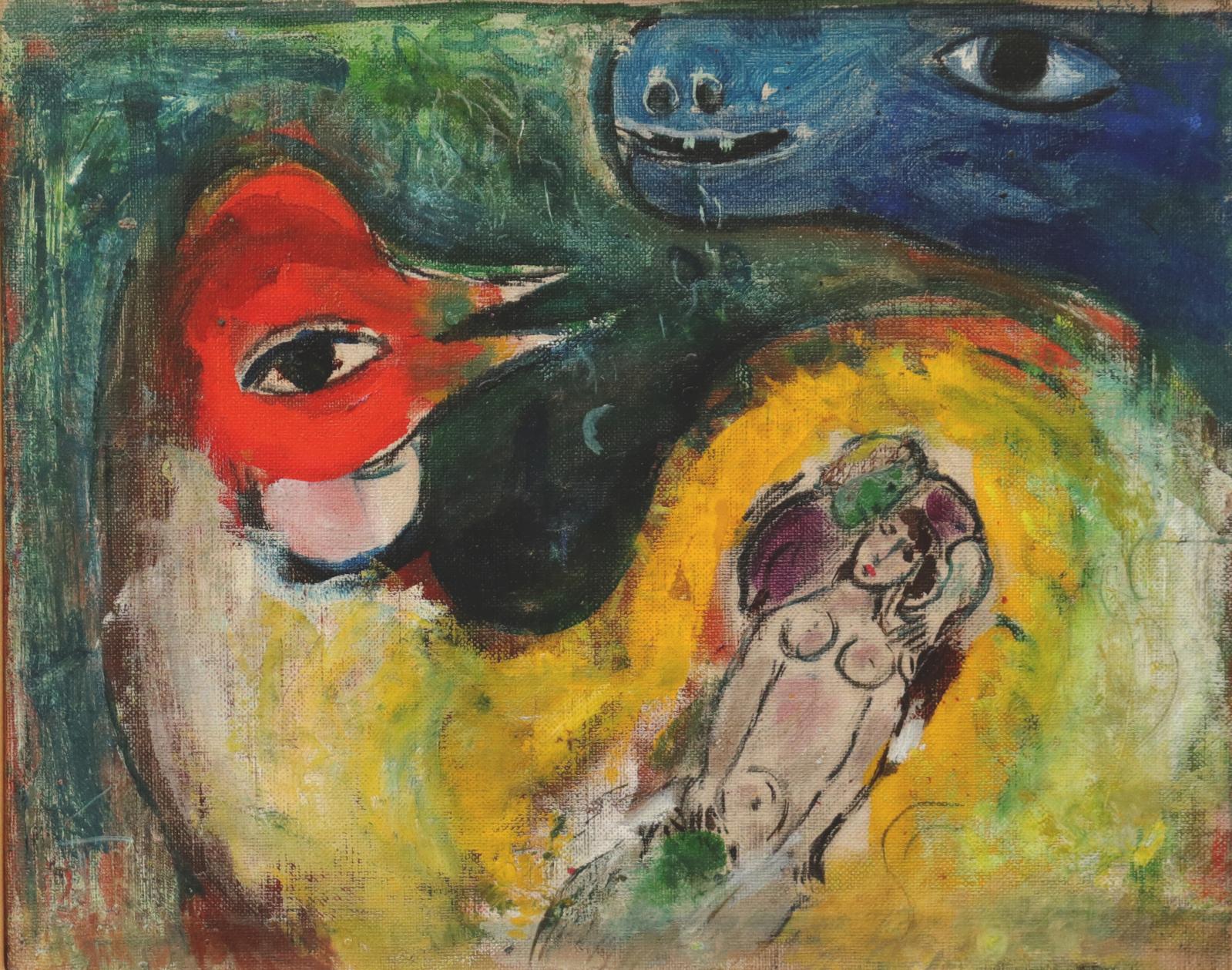 The fairytale, fanciful world of Marc Chagall (1887-1985) needs clues to be deciphered when we see a rooster, a goat, a donkey, two lovers, a violin, roofs, the moon, a sleeping town and so on. His paintings all tell a story: that of a man born in Tsarist Belorussia into a deeply religious family imbued with two fundamental souls: one Slavic, the other Yiddish. In this Coq aux amoureux dating between 1947 and 1950 –a study for a large painting of the same name (71 x 87 cm, 2.3 x 2.8 ft) sold at Christie's in 1999 –, we find three basic components of his pictorial alphabet: the rooster, the donkey and the lovers, but with a major variant: the young couple are not flying in the sky – a symbol of their freedom and infinite love – but are nestling in the rooster's belly. Are they waiting to be born, or on the contrary seeking protection from the world? The rooster accompanied Chagall from his childhood home in Vitebsk to Berlin, then Paris. A recipient for sins in Judaism, it is also the national emblem of France, his adopted country, which he was forced to leave for a time during the Second World War. When he created this work, the artist had returned from America, where he had lost Bella (1895-1944), his wife and muse. From then on, he constantly depicted her, here in the nude. A man watches over her. Did the artist want to offer her a refuge? At the end of this long, dark, confused period that saw the extermination of his people, his wife was suddenly taken from him. It was understandable that he should have conceived this warm safe cradle to protect her – forever.

tableaux modernes, écoles bretonnes
Brest - Hôtel des ventes, 26, rue du Château - 29200
Thierry - Lannon & Associés
Info and sales conditions
Catalogue
Newsfeed
See all news
Frieze New York is Coming Back in May
Museums Permitted to Reopen in Six Italian Regions
A Mysterious Tanguy Work is Up for Auction
Stunning Discoveries in Saqqara
Not to be missed
Pre-sale
Sacred Objects of Mexico
Like the standing figure from the pre-Teotihuacan culture on the…
Pre-sale
18th-century Sculptors and Cabinetmakers
Fine 18 th century furniture has become a somewhat rare commodity…
Pre-sale
Deep-Sea Diving in Luxury
Rolex watches are omnipresent in auction rooms and increasingly…
Pre-sale
An English Passion
This pair of lidded vases in soft-paste Sèvres porcelain decorated…