Finally! Thanks to the appearance of quality works, the market is at last rehabilitating painter George-Daniel de Monfreid. 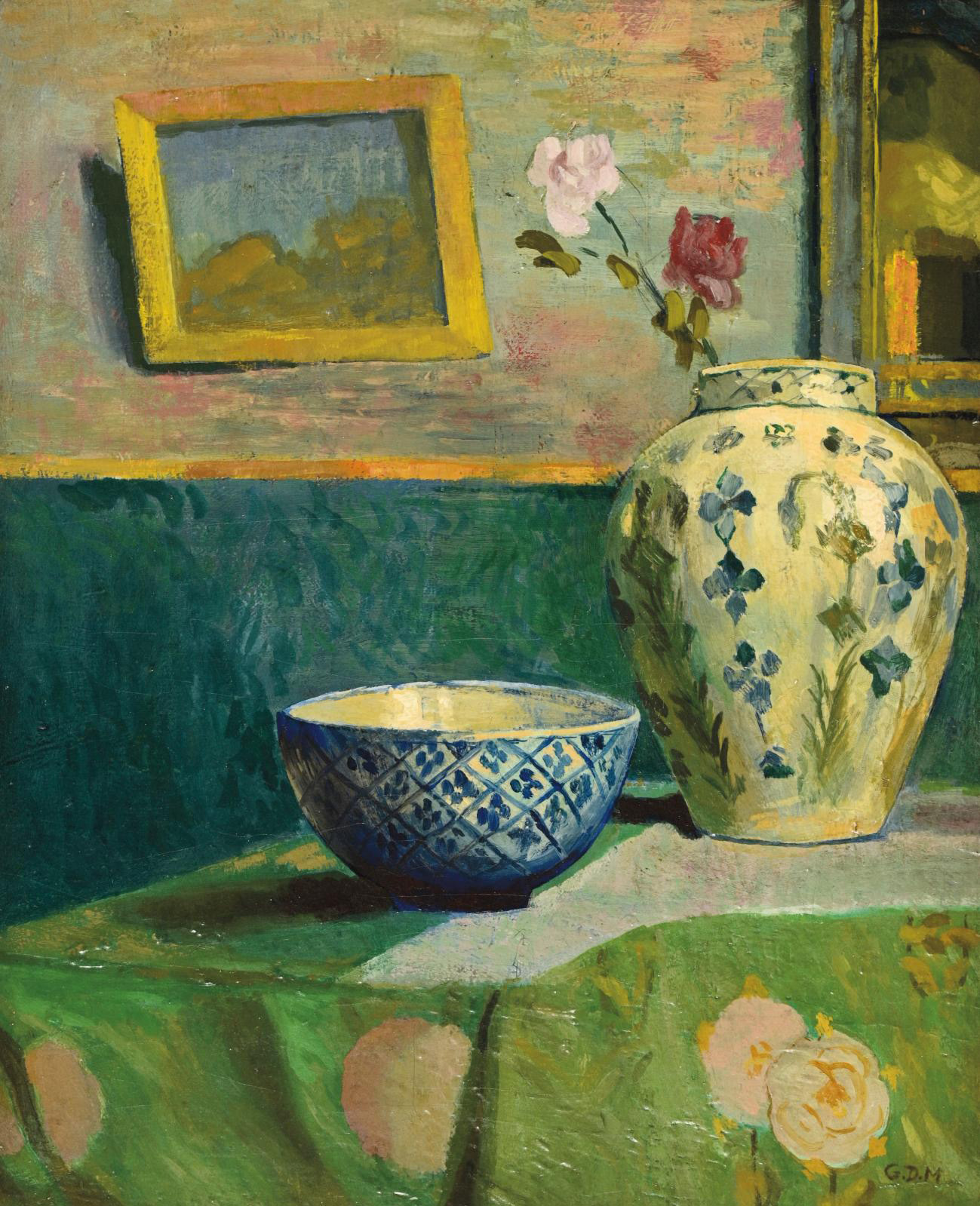 In November 1887, Émile Schuffenecker introduced Gauguin to his studio companion, George-Daniel de Monfreid, who two years later was invited to participate in the Volpini exhibition, named after the manager of the Café des Arts just across the street from the Universal Exhibition. The older artist introduced the younger one to Synthetism, which continued to influence him. From 1891, Monfreid received letters from his friend describing his life in the tropics, his art and his difficulties. They discussed their personal feelings and views on art until Gauguin's death.

Born possibly in New York in 1856, George-Daniel de Monfreid was the son of not Caroline de Monfreid but Marguerite Barrière, who was married at the time, as indicated by a birth certificate issued by the French consul in New York over 20 years later. The family was well-to-do, and George-Daniel's Uncle Reed—perhaps his father—financed his studies. During a stay in La Franqui, a small French seaside resort near Leucate in the Aude region, George-Daniel fell in love with Amélie, daughter of the hotel owners, and married her. He then divided his time between Paris and La Franqui in southeastern France and his house in Corneilla-de-Conflent (Pyrénées-Orientales).

He painted his artist friends, views of the region and still lifes in a vigorous style and a range of bold colors. He gave great care to the ornaments he liked to include in his portraits: warm-toned oriental carpets, hangings and ceramics. In 2003, the museums of Alençon and Narbonne devoted an exhibition to the painter, who was then little known and still too often regarded merely as Henri de Monfreid's father and Gauguin's friend.

The Sea and its Light Marked the Beginning for James Ensor

Belgian artist James Ensor possessed a precocious and dazzling genius. This seascape, painted when he was only 20, illustrates both his sources of inspiration and his artistic ambitions. 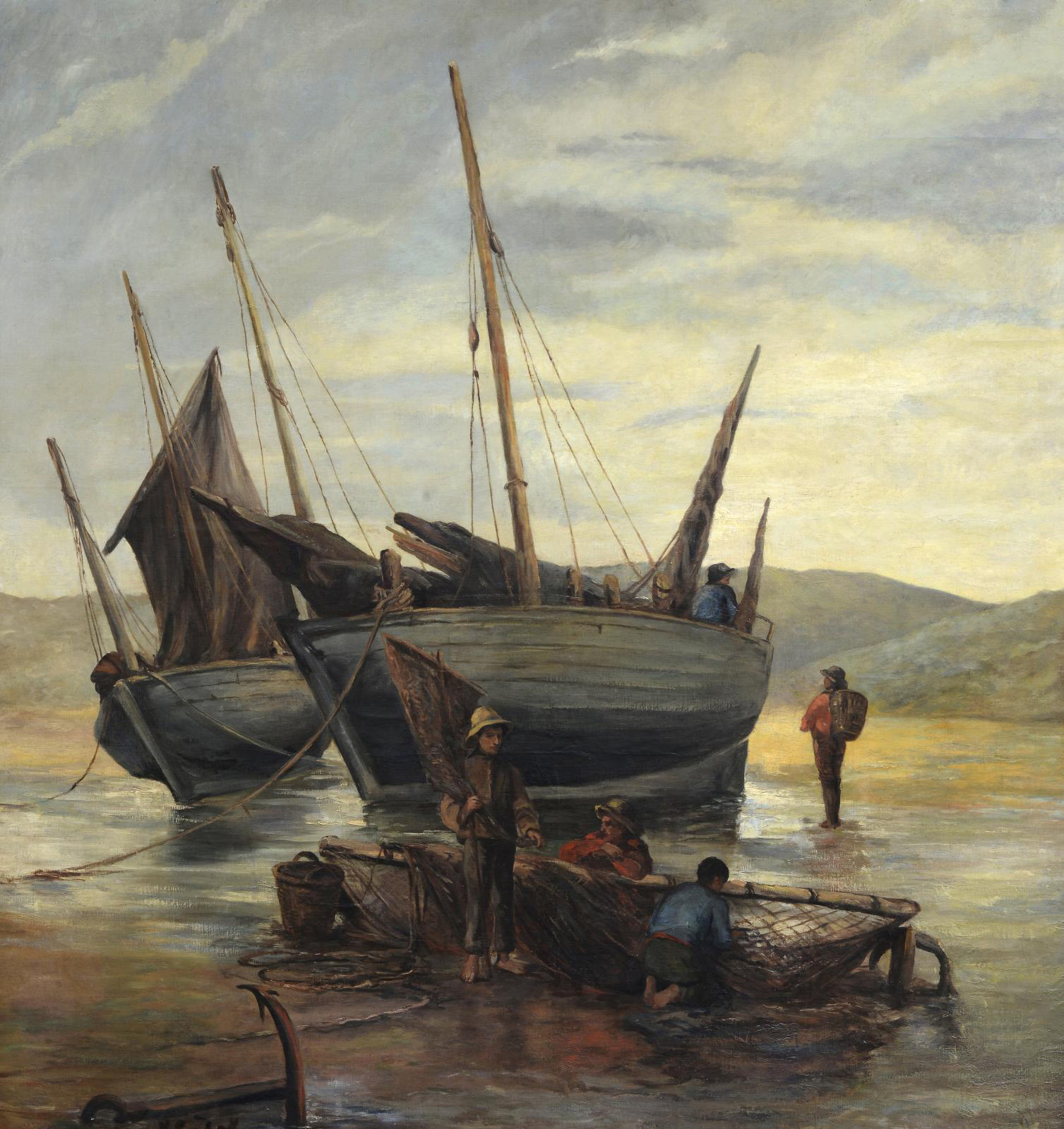 While the name of James Ensor (1860-1949) inevitably conjures up the souvenir and curiosity store run by his mother, presented as the place where the young boy's imagination developed, another, far vaster world also played its part: the sea. Ensor was born in Ostend, Belgium, in 1860. This fishing town became well-known when the Holy Roman Emperor Leopold I (r. 1658-1705) made it his summer residence, and by the end of the 19th century was a popular seaside resort. It was also the fabulous setting for the childhood of the painter, the son of a highly cultured and sensitive Englishman, James Frederic, and a member of the local bourgeoisie, Marie Catherine Haegheman. In a letter of 1932, the artist wrote that he was working a great deal, "riveted by the sea". This was a source of inspiration that never dried up.

Ensor virtually never left Ostend. Although he went to study in Brussels in 1877, he found neither academic education nor the capital conducive and returned to his native town in 1880: the same year he produced this large painting, as evidenced by the inscription on the back.

He was then only 20 years old. He was not yet the brilliant creator of the masks and skeletons that earned him lasting fame, but he worked on them, letting his fertile imagination gradually develop and supplant everything he had been taught: both the Flemish tradition and the Impressionist movement then at its peak. At that time, fishermen were among his favorite subjects. He observed them and tried to depict them realistically. In this composition, we see them firmly positioned beside their boats grounded on the sand, chatting as they work on their nets. The line of the drawing is deftly mastered and the dark colors give substance to the boats' massive hulls.

But there is much more to the seascape than this naturalistic interpretation: the water and its reflections, the sky and its variations. Ensor was a quick learner, skilled in using light colors, shadows and fragmented strokes to give life and movement to his landscapes. And he went still further. The sun and its light pierce the composition and illuminate it, immersing it in an unreal atmosphere already bordering on the fantastical. Ensor worked in his parents' attic, creating some of his finest paintings in this improvised studio. In Ostend, he mingled with people from all walks of life and boldly depicted the hardships of the fishermen's life while mocking the cozy existence of the bourgeoisie. He exhibited in Brussels in 1881 and helped found the XX group in 1884. Nonetheless, he long remained an unpopular, isolated artist. Over the following years, cut off from the neo-Impressionist movement in vogue at the time, his painting moved with impressive sureness towards a clear style imbued with an omnipresent light. This quirky unrealism, halfway between Symbolism and Expressionism, increasingly featured the themes of terror and death: a world that took only a few years to construct but began to show its creative limits in 1893.

MODERN PAINTINGS, BRETON SCHOOLS (Seconde Vacation)
Brest - Hôtel des ventes, 26, rue du Château - 29200
Thierry - Lannon & Associés
Info and sales conditions
Catalogue
Newsfeed
See all news
David Hockney’s Design for the London Subway Is Mocked Mercilessly Online
Mixed-Media Artist Robert Longo to be Represented by Pace Gallery after Metro Pictures Closure
Submissions Open at ETH Zurich for Scholarly and Experimental Articles
Latinx Art Expert E. Carmen Ramos is Appointed National Gallery of Art’s Chief Curator
Not to be missed
Pre-sale
Love Through the Eyes of Boucher and Watteau
The top results of this classic sale could be posted in the early…
Pre-sale
Cartier's "Mystery Clock"
This monumental Art Deco timepiece in rock crystal, onyx and marble,…
Pre-sale
The Style of French Architect Charles Percier
One of Charles Percier's earliest drawings, which he made in Rome…
Pre-sale
Into Outer Space with Kuramata
t his Solaris cabinet with an airy base again proves that lightness…