This soft-toned evocation of studying sacred texts is rare in the Orientalist painter’s large body of work. 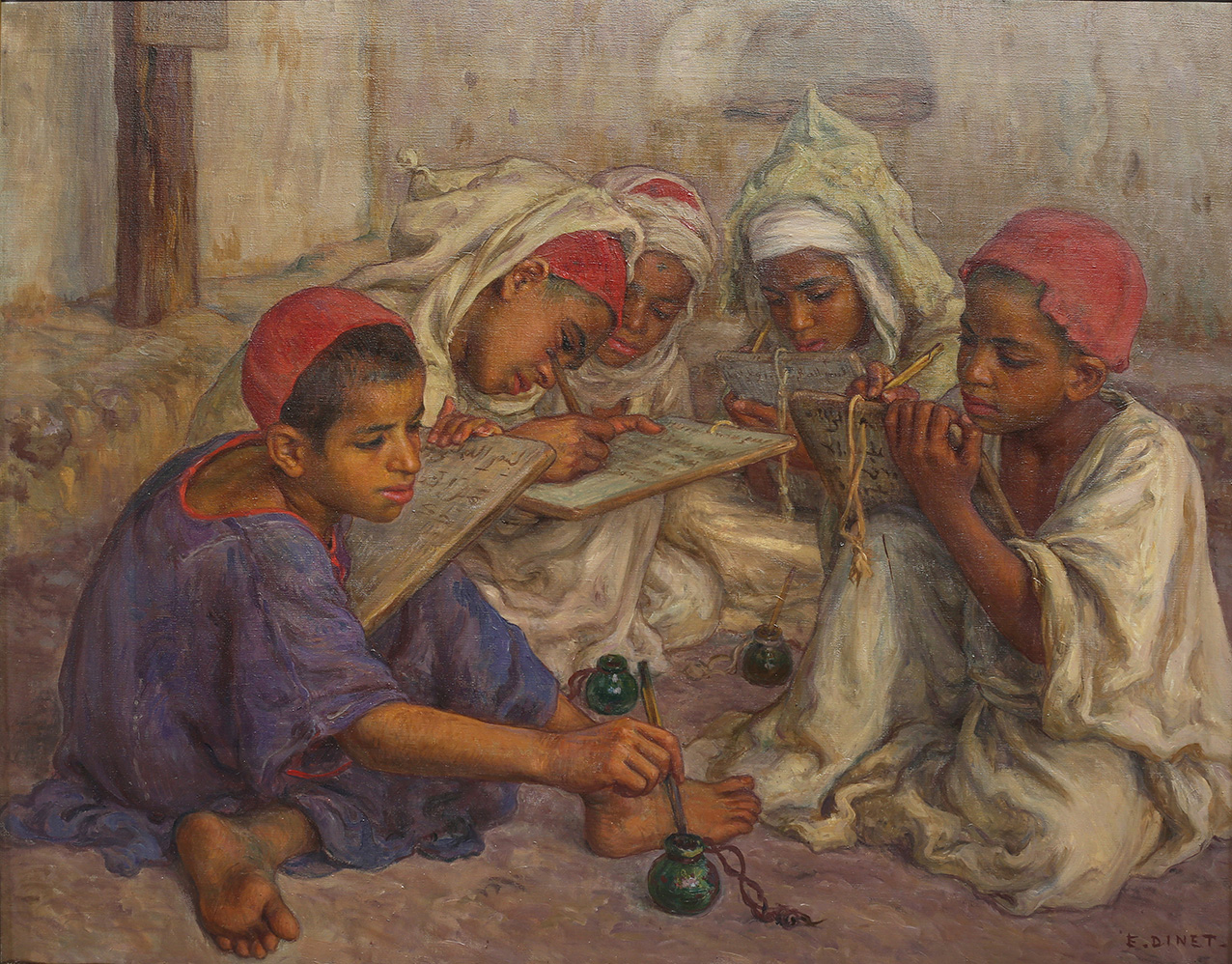 Squeezed together and sitting on the floor, five boys dip their pens into small glazed terracotta inkwells before writing a few verses on coated tablets. The scene takes place in a Koranic school, a religious educational institution where children devote themselves to learning the Arabic language and calligraphy from a very young age by memorizing the sacred book of Islam, the Koran. These institutions flourish alongside State-sponsored schools in every city and village of the Muslim world; but this one is in Algeria, a country cherished by the painting’s creator, Étienne Dinet. In 1884 this child of the Parisian bourgeoisie discovered the country that became his sole source of inspiration, nurtured by images of a simple, authentic life close, in his eyes, to a type of lost paradise. From 1887 onwards, he spent an average of six months a year in Algeria, particularly in Bou Saâda, a small town in the South. In 1905 he bought a house there and built a studio to paint his favorite subject: women, especially the Ouled Naïl, dancers and prostitutes, adorned with finery or sometimes naked, that his artistic eye captured everywhere, in alleys, in wadi and on the terraces of houses.

Dinet, the believer
Alongside this subject, which was very sensual for the time and place, Dinet began exploring themes with religious overtones, especially after 1913, when he officially converted to Islam and took the name Nasreddine. He depicted believers saying their prayers, imams leading assemblies, shepherds listening to muezzin, etc. The Koranic school is a rarer subject. Painted around 1910, our work has belonged to the descendants of its first owner, Frédéric Lung (1863-1942), until today. An Algiers businessman, wine merchant and philanthropist—he built a leisure center at Clos-Salembier in Algiers, for example—he was also a great collector of paintings, some of which his widow bequeathed to the musée national d’Art moderne (National Museum of Modern Art) in Paris in 1961. Keen on Orientalism, Lung bought several works by Dinet, including L’École coranique (The Koranic School), which appeared at the 1913 Salon of Algerian and Orientalist artists. 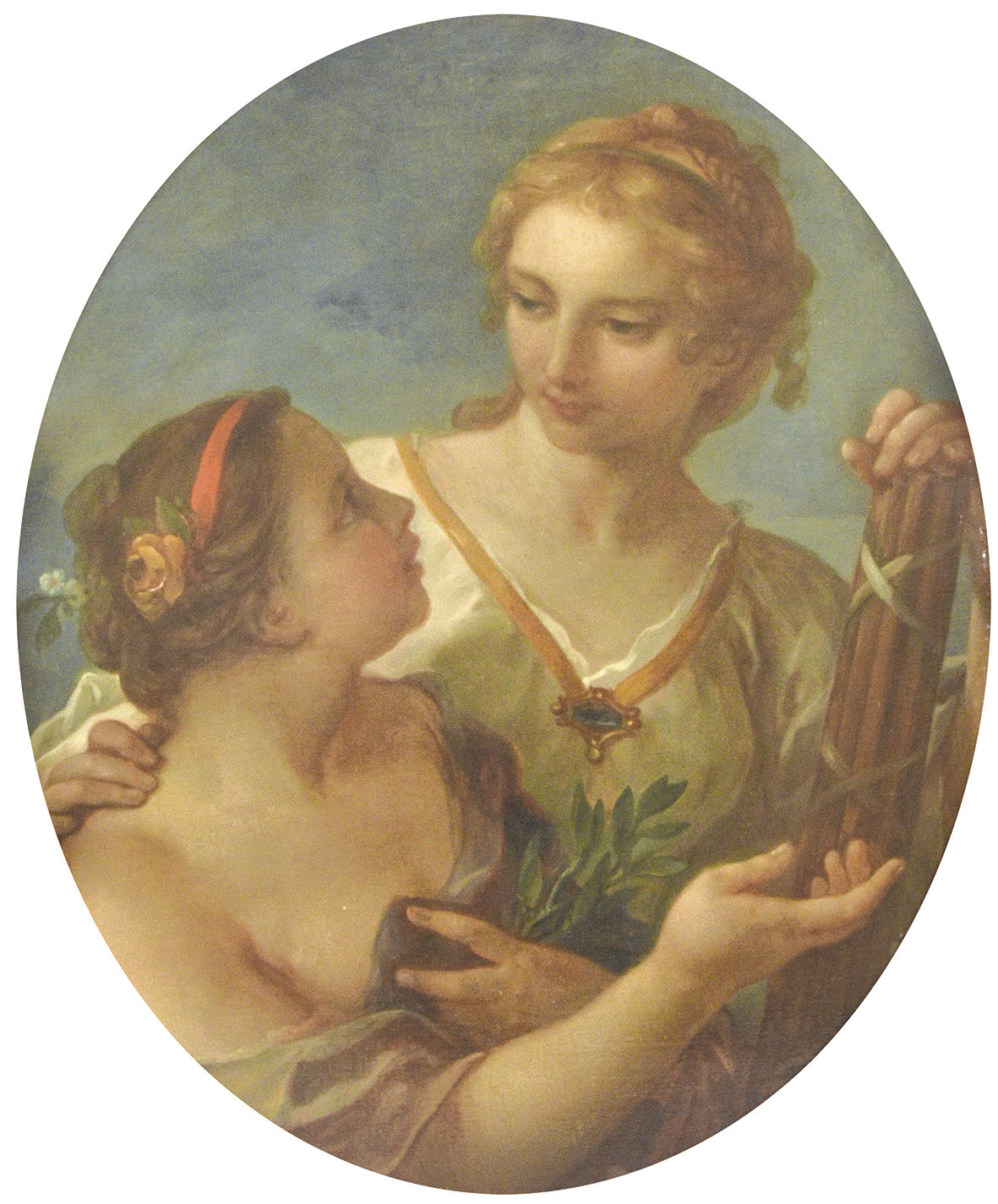 While the painter Charles-Joseph Natoire (1700-1777), Grand Prix de Rome in 1721, is particularly known for his decorative work for churches, the King at the Palace of Versailles and private mansions in Paris (like the Hôtel de Soubise in the 3rd district (Marais) Paris), he was also highly skilled in the art of the portrait and more intimist scenes. The artist's catalog raisonné mentions a lost painting, numbered P.318, entitled La Paix et la Concorde (Peace and Concord), an oval oil on canvas (Susanna Caviglia-Brunel, Charles-Joseph Natoire, Arthena, 2012, p. 494), which could well be this 63 x 53 cm (24.8 x 20.86 in) work coming up for sale at the Vannes sales on Saturday, November 7 with the Jack-Philippe Ruellan auction house. It is estimated at €6,000/8,000 (Cabinet Turquin).