Martin-Guillaume Biennais (1764-1843) promoted French imperial propaganda, notably through his "Napoléonides" series. Several previously unknown pieces will be revealed at the sale of a group of works hailing from the artist's descendants. 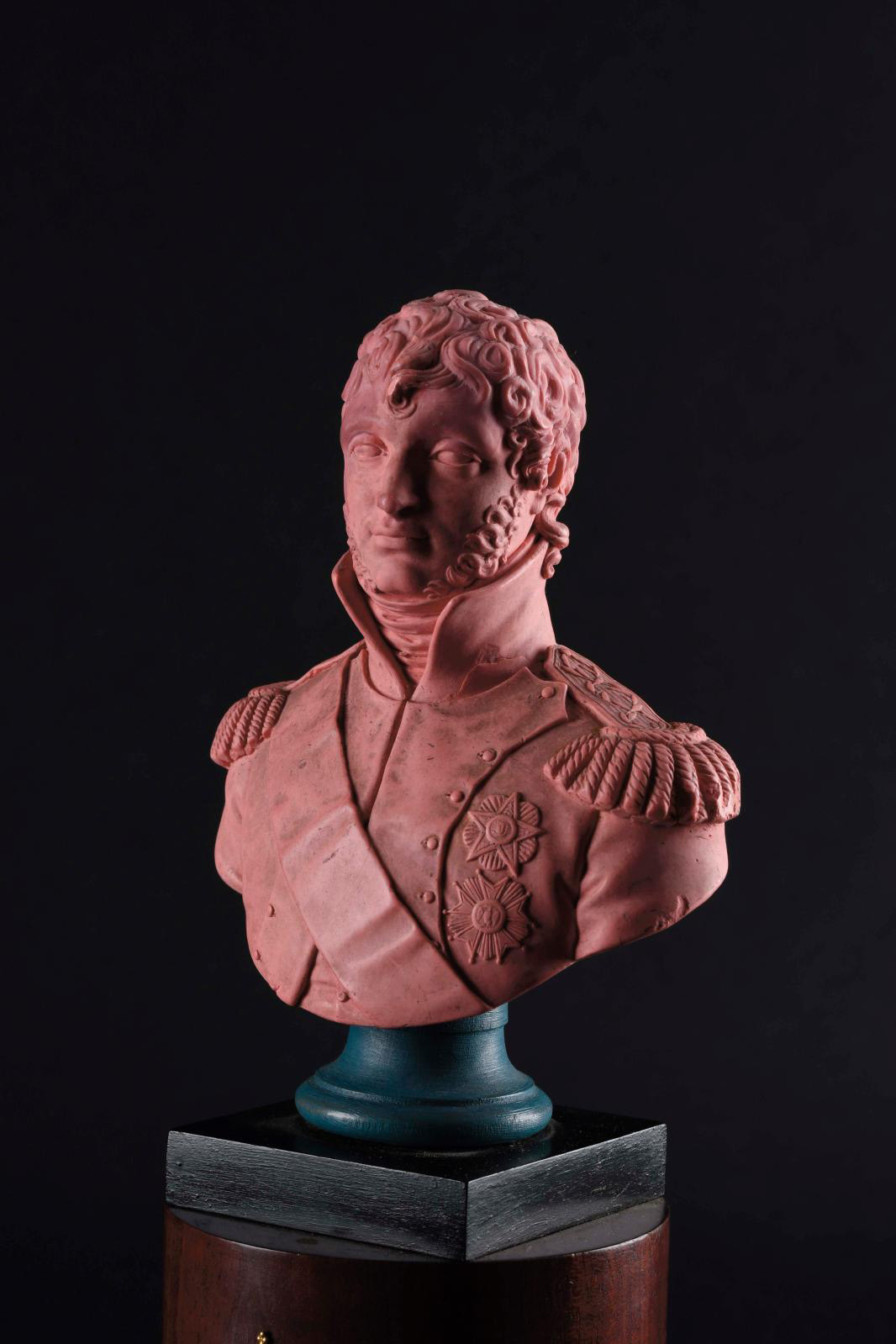 Following Napoleon I's second marriage in 1810 to Marie-Louise of Austria, Martin-Guillaume Biennais decided to create a series of busts of the imperial family and their closest supporters. Staunchly loyal to the French Emperor ever since he had designed a travel kit (also known as a 'necessary') on credit for Napoleon (at the time a general preparing for the Italian campaign), the goldsmith paid tribute to the members of this invaluable clan, of whom Napoleon made judicious use, placing each of his brothers, sisters and children at the head of the countries in his empire: Hortense and Louis in Holland, Jérôme in Germany, Eugene, Caroline and Elisa in Italy and Joseph in Spain. Biennais' small gilt bronzes in their likeness, around 7.8 inches high (20 cm), standing on columns marked with the initials of the person in depicted, were named "Napoléonides". There are 28 of them, according to the inventory of specialist Guy Ledoux-Lebard. He also included three pink wax busts used as models for the goldsmith to cast. In addition to those of Jérôme, Marie-Louise and Caroline, this sale, featuring 150 lots that come directly from the descendants of one of Biennais' daughters, will also include one of the famous military commander Joachim Murat (1764-1815), depicted with the "Grand Cordon" of the Légion d'Honneur, expected to make €8,000/12,000. A soldier, Napoleon's ally on the battlefields from the outset, Marshal of the Empire and finally king of Naples, Murat married the emperor's sister Caroline. This wax bust is slightly larger than the gilt bronze version, as the metal shrinks after casting.

Also unknown until now, a pink wax bust of Princess Caroline Murat—restored in the 19th century and painted cream—is on offer at the same estimate. It has a singular aspect that may well appeal to historians. While these busts usually only have Biennais' signature on the base, this one is signed by Joseph Anton Couriguer (1750-1830), a sculptor from German-speaking Switzerland who specialized in waxwork. Couriguer was the first person to be put forward as a potential collaborator for Biennais in regards to this major commission. We know that the master, initially an ivory-turner, had largely profited from the abolition of the guild system to diversify his production and launch into goldsmithing and cabinet-making. But to carry out all his projects, Biennais collaborated with many artists, especially sculptors. The intriguing question is now whether Couriguer created the 28 busts of the Napoléonides.

Coming from the descendants of one of the goldsmith's daughters (the same who owned the gold laurel leaf from the emperor's crown made by Biennais, which fetched €625,000 at Fontainebleau in 2017), these busts will be accompanied by another variant of Caroline Murat in gilt bronze, this time as a herm, i.e. with a bust with a quadrangular block-shaped base (€12,000/15,000).

Everyday objects will follow, as well as silverware and tableware, like a lidded silver coffee pot with a relief decoration of faces estimated at €800/1,000, and a rare travel kit in a rectangular mahogany box containing silver utensils and silverware, which should fetch €20,000/25,000.

Over 150 pieces coming from the descendants of one of Martin-Guillaume Biennais' daughters are up for sale, ranging from silverware to goldwork and sculptures. 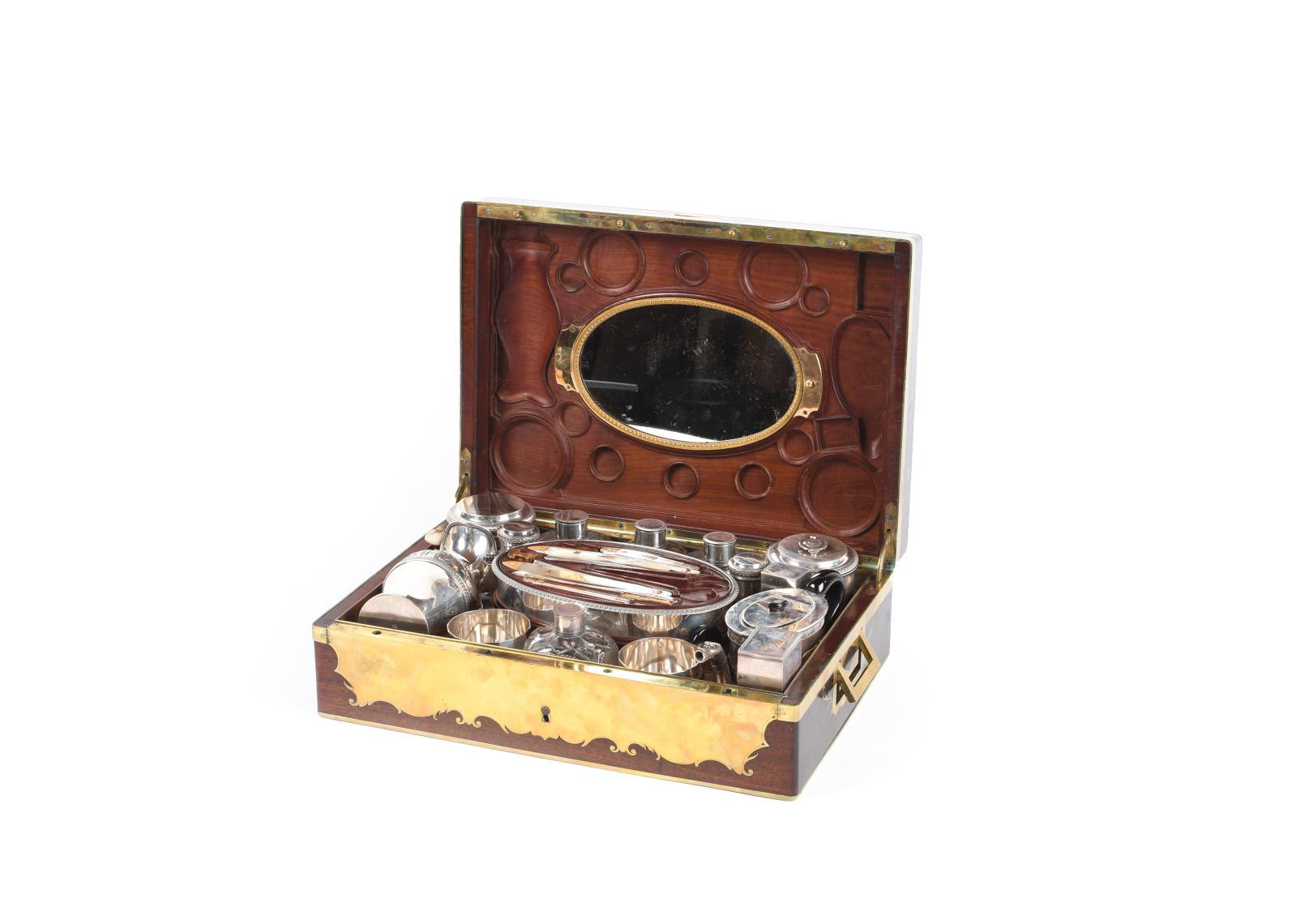 Although Martin-Guillaume Biennais brilliantly diversified his products and achieved the success he won as one of the French Emperor's main suppliers, this travel kit or necessary evokes his initial training as a tabletier (maker of precious objects like snuff boxes, etc.). These small items—ranging from writing tablets to combs—all involved meticulous work in wood, gold, tortoiseshell, horn, mother-of-pearl and ivory. These kits, which reached the height of their popularity during the First Empire, were the signature products of tabletiers, particularly Biennais, who launched his career by making a travel kit (on credit) for the young Napoleon who was on his way to the Italian campaign as a general. His relationship with the future emperor continued for many years.

His store, under the sign of Le Singe violet (The Purple Monkey), stood in Rue Saint-Honoré. In 1808, he employed over 80 workers: the humble craftsman from Normandy was one of the leading entrepreneurs of his time. He collaborated with leading cabinetmakers and architects, like Georges Jacob, Charles Percier and Pierre Fontaine, who brought him commissions for goldwork, furniture and sculptures, as witness the gilt bronze and wax busts on offer in this sale, which belong to his famous "Napoléonides" series.

Print the article
Newsfeed
See all news
Tracey Emin Wants Art Removed from No.10 Due to Boris Johnson’s Behavior
Major KAWS Exhibition Opens at Serpentine and on a Video Game
Master Drawings New York to Go Ahead
Despite Tax Haven Links, Dutch Government Agrees to Buy Rembrandt for $175M
Not to be missed
Pre-sale