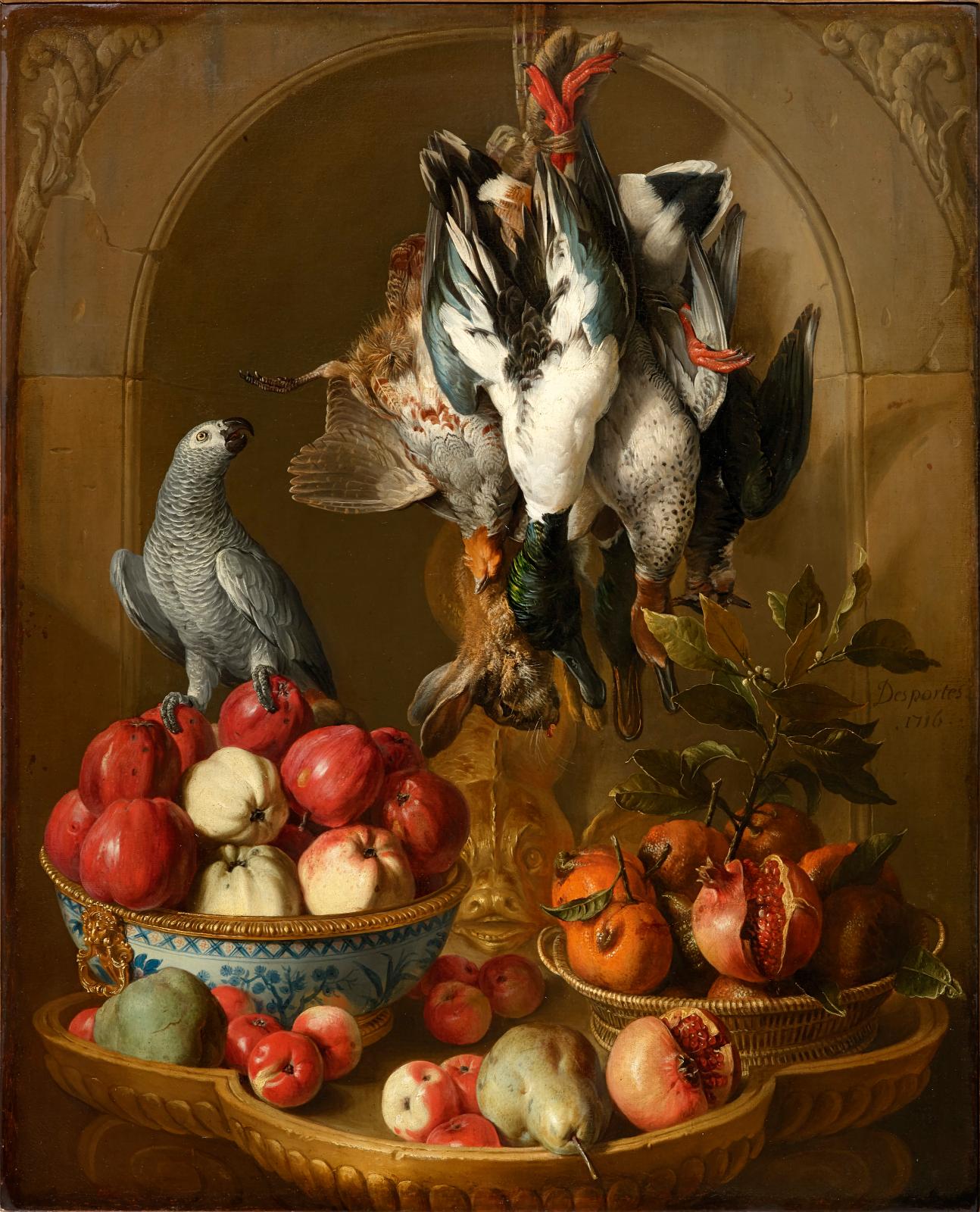 This skilful composition is a celebration. The abundance and variety of the fruit and game promise unalloyed pleasure, while the African grey parrot provides an entertaining and decidedly amusing touch. The absolutist French King, Louis XIV died in 1716, and the pall of austerity imposed on the court by Madame de Maintenon was swept aside. Here a profusion of earthly delights are assembled in a marble fountain basin whose dolphin's head ornamentation, probably in gilt lead, has a similar feel to the work of Gilles-Marie Oppenordt, architect to the Regent, Duc Philippe d’Orléans, since 1715. The dolphin can also be seen as an allusion to the Regent's daughter, Marie-Louise Élisabeth d’Orléans: she had one carved on the frame of her portrait painted by Largillière, and it also appears in a picture her father commissioned from Desportes for the Château de La Muette, situated near the Bois de Boulogne in Paris. All evidence pointing towards Philippe d’Orléans, the son of Monsieur, Louis XIV's brother, who acted as regent during Louis XV's minority from 1715 to 1723. On the Sun King's death, he moved into the Palais-Royal in Paris with his court, and ordered designer Gilles-Marie Oppenordt to extend the premises and update them to current taste. In the sale catalogue notice, Pierre Jacky, author of the 2010 catalogue raisonné for François Desportes (which included this previously unsold painting in a supplement) raises the theory that this fountain with its dolphin decoration was copied by Desportes from a model created for the Palais-Royal. In 1716, the Duke became the main patron of Desportes, who produced at least three paintings for the kitchens of his new residence that year. One of them (now in the Musée de la Chasse et de la Nature in Paris) features an African grey parrot similar to the one here. Was the piece intended for the Regent's apartments? This is a theory put forward in the sale catalogue. "We lingered for a while in this large apartment in the Palais-Royal, so magnificently enlarged and fitted out by Monsieur le Duc d'Orléans, until all the guests had arrived from the palace. We were then served an extraordinarily grand menu, which was both splendid and subtle, with not a single heavy, greasy dish. (…) We spent some time over it, as the meal was long and good, and everyone was starving." It was 1713 when the Comte de Saint-Simon wrote this account, which appears in chapter 15 of his Mémoires, but it gives an idea of the care already lavished by Philippe d’Orléans on his receptions. A bon vivant who relished every earthly pleasure, a gourmet and himself a keen cook, he made etiquette more informal, introduced the fashion for more friendly "little suppers" and made champagne popular. The Regency marked the beginning of the great epoch of French cuisine: in the very first dining rooms, service became remarkably refined and decoration of such immense importance that the term "culinary aesthetics" was coined.

TABLES, FURNITURE & ARTS OBJECTS from the XVIIth to the XXth centuries
Bordeaux - 12-14, rue Peyronnet - 33800
Briscadieu
Info and sales conditions
Catalogue
Newsfeed
See all news
Peter Van de Moortel Appointed Chief Conservator at Kimbell Art Museum
Damage of Confederate Monuments Now a Felony in Florida
Lynda Roscoe Hartigan Becomes Peabody’s First Female Director
Judson Collaborates with Contemporary Artists to Modernize Stained Glass
Not to be missed
Pre-sale
An Allegory of the Basque Country by Arrue
Ramiro Arrue again headed up the beautiful selection of works by…
Pre-sale
Pierre Paulin for the Elysée
Do you want to feel like the former French President (1969-1974)…
Pre-sale
A Landscape’s Solitude Captured by Buffet
Ubiquitous Bernard Buffet (1928-1999) is back with an urban painting…
Pre-sale
Georges Rouault’s Spiritual Quest
This work, which comes with a 2016 certificate of authenticity from…