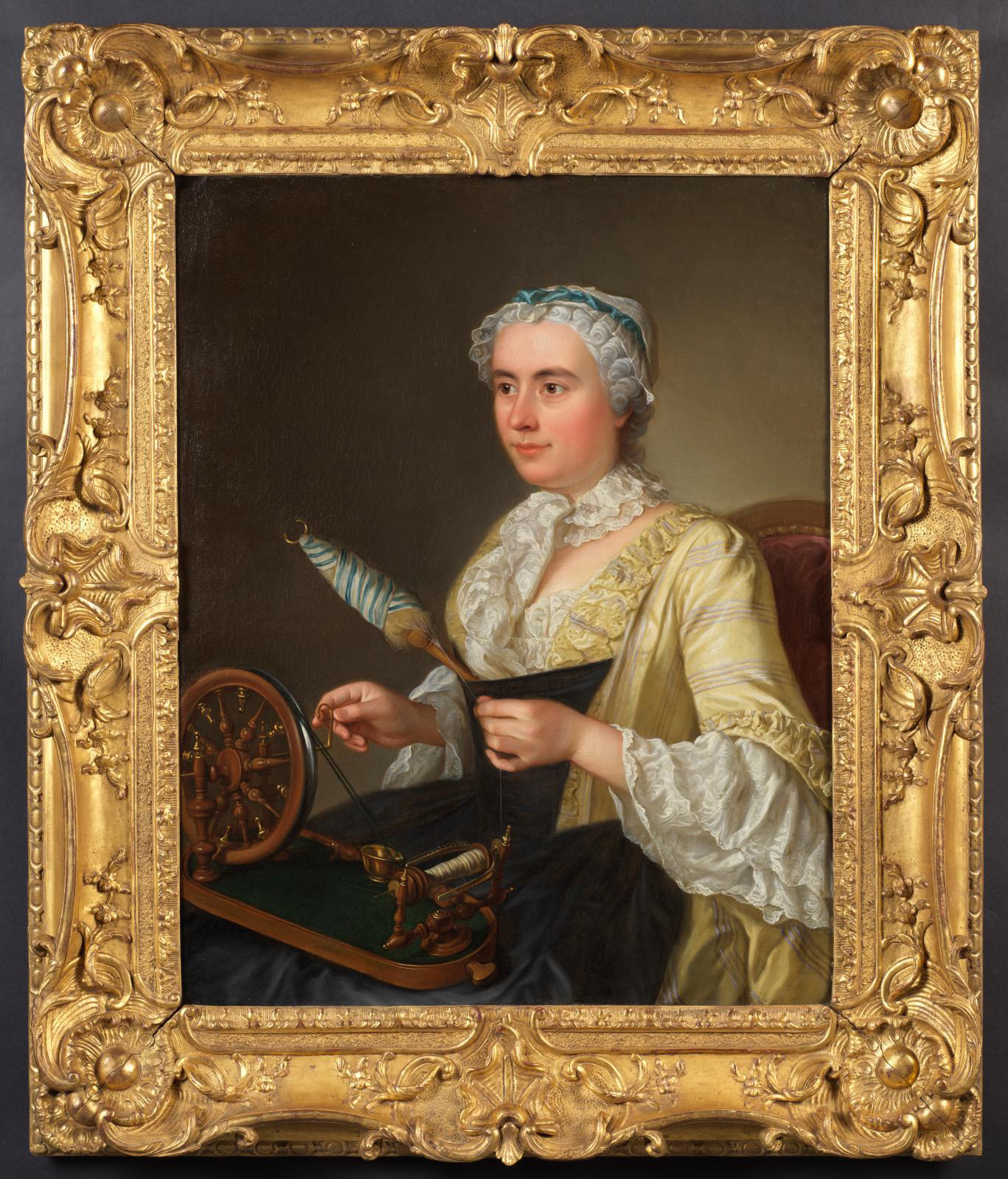 Although many artists are named Lefèvre or Lefèbvre, not all of them are related to each other. At least 12 appear in 18th-century records, which makes attributions complicated, to say the least. Portrait de Marie-Thérèse Girard, née Bouchardon, is ascribed to Jean-Baptiste, son of a Saint Luke’s Academy director who himself became a member of that body in 1751 and a professor in 1769. He received several commissions for the Chateau of Versailles: the first, at the request of Marie Leszczynska (Queen of France, r. 1703-1768) between 1741 and 1742, for religious paintings, the others, in the 1760s, for portraits, a genre in which he seems to have made a name for himself.

In 2018, French curator Xavier Salmon published a catalog of the pastels held at the Louvre, which boasts the world’s most beautiful collection in that medium. This gave Neil Jeffares, author of Dictionary of Pastellists Before 1800, an opportunity to review some attributions, especially those involving Jean-Baptiste Lefèbvre. He noted that the artist worked for Parisian circles, including that of Monsieur de Rozeville, a lawyer at the city’s Parliament, and that his brother-in-law was pastel maker Jean-Nicolas Vernezobre (1719–1789). The British art historian also ascertained that Lefèbvre, who lodged at a hostelry on the Quai Pelletier called "À la couronne d'or" ("to the golden crown"), participated in the Salon from 1753 to 1774 and was often asked to provide expert testimony at trials on the quality of oil paintings, pastels and miniatures. All of this paints a picture of a well-introduced man. No wonder he was asked to paint the portrait of a daughter and sister of fashionable sculptors.

A Quiet Sister
Born in 1715, Marie-Thérèse was the 15th and penultimate child of Jean-Baptiste Bouchardon (1667–1742) and the sister of Edme (1698–1762). Her father and brother were both sculptors. Edme stood in good favor at court, especially after being appointed the king’s sculptor in 1732. Little is known of Marie-Thérèse, except that she married the gentleman François Girard in 1742 and, with him, looked after her brother’s estate. That is how several of Edme’s sketchbooks entered the Louvre after their deaths. Mr. Jeffares also writes that Lefèbvre liked to paint his models indoors and, in both paint and pastel, paid particular attention to their clothing and accessories, which he painstakingly detailed. The young Marie-Thérèse’s overall appearance—a sober black apron over a daffodil silk dress—leaves no doubt about her social rank. The viewer’s gaze is drawn to the brass and walnut spinning wheel she is carefully turning. This was a worthy occupation for highborn women and gives the portrait additional charm. Presented in a beautiful carved and gilded Louis XV wood frame, the portrait belonged to the Baronne de Montessuy in the 19th century and has been in a private collection since 2012.

Bon Boullogne, a son and brother of artists, made this large painting of Pan amidst nymphs in an idealized landscape, which tops the bill of a classic sale. 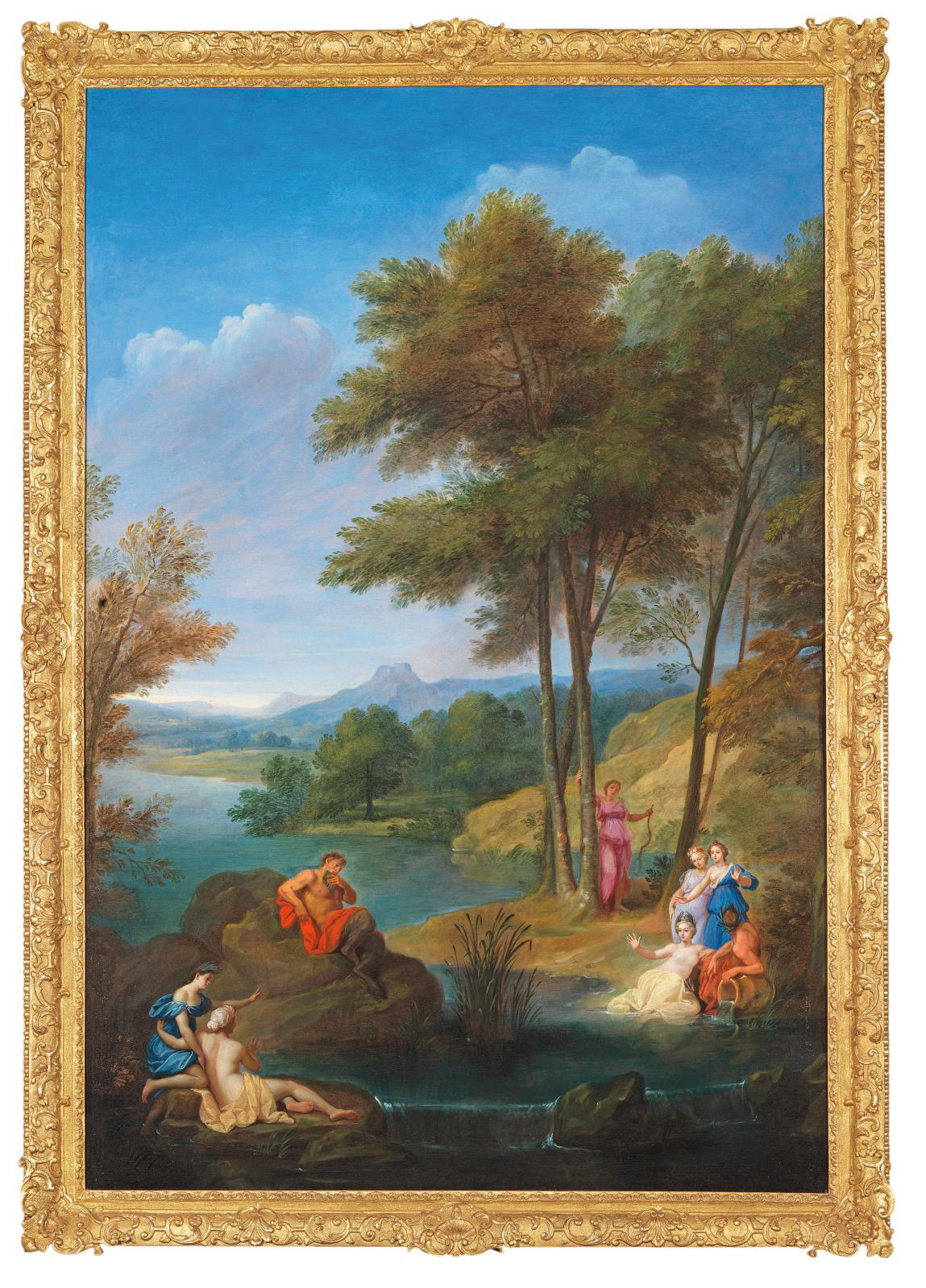 The god of shepherds, flocks and woods, Pan—a creature that was half man and half goat, with an aquiline nose and pointy ears—was devoted to hunting and music in the valleys of Arcadia. Feared by travelers because he appeared to them by surprise—the word panic is derived from his name—his attribute is the syrinx, an instrument featuring several reed tubes of various lengths tied together, a metamorphosis of the eponymous nymph with whom he had fallen in love. Refusing his advances, she tried to escape him, and the young man ended up embracing only a bundle of reeds. Here she is dressed in pink and carries an ivory bow slightly behind her companions. Based on Ovid's Metamorphoses, this very readable composition differs from a painting the same artist made for the Grand Trianon in Versailles (Musée d'Arras), in which another character is seen facing the syrinx. The patron probably wanted a larger version: our version here.

The painting was in the collection of a notary who apparently loved art, alongside an early 18th-century vermeil cup by Jacques Prévost with radiating decoration and a pineapple-shaped handle (€30,000/50,000), some French Nevers and Rouen earthenware and Japanese porcelain from Imari. Jean-Baptiste Lefèbvre’s Portrait of Marie-Thérèse Girardon née Bouchardon is expected to fetch €60,000/100,000, while a painting by Étienne Jeaurat, Le Départ de la nourrice (The Nurse’s Départure), is estimated €70,000/100,000. Unsurprisingly, the furniture is from the Louis XIV, Louis XV and Louis XVI periods, attributed to or stamped by Nicolas Pineau, Pierre IV Migeon, Jacques Dubois, Nicolas Simon Courtois and others.

ANCIENT PICTURES AND DRAWINGS - OBJECTS OF ART AND VERY NICE FURNITURE from the 15th to the 19th century
Salle 1-7 - Hôtel Drouot - 9, rue Drouot - 75009
Kohn Marc-Arthur
Info and sales conditions
Catalogue
Salerooms
Newsfeed
See all news
Jesus College: The First UK Institution to Repatriate a Benin Bronze
The Venice Biennale of Contemporary Art is Getting a Research Center
Frieze Names Patrick Lee Director of Its New Seoul Fair
Fallen Art Star Charged with Selling Raymond Pettibon Forgeries
Not to be missed
Pre-sale
Memories of the Montmorencys and the Château de la B…
Two views of a château, a miniature by Daniel Saint, old games,…
Pre-sale
An Ode to Ancient Greece by the Sèvres Workshop
The astonishing decoration and rare shape of this Sèvres soft porcelain…
Pre-sale
Fascinating Fossils of Mammoths and Dinosaurs
This skull attests that mammoths roamed the steppes a million years…
Pre-sale
A Solid Investment: The Hermès 'Himalaya' Birkin Bag…
This version of Hermès’s emblematic Himalayan-colored Nile crocodile…