Eugène Delacroix (1798-1863) was deeply attached to religion and painted a range of Biblical subjects, like this dark and expressive Entombment of Christ. 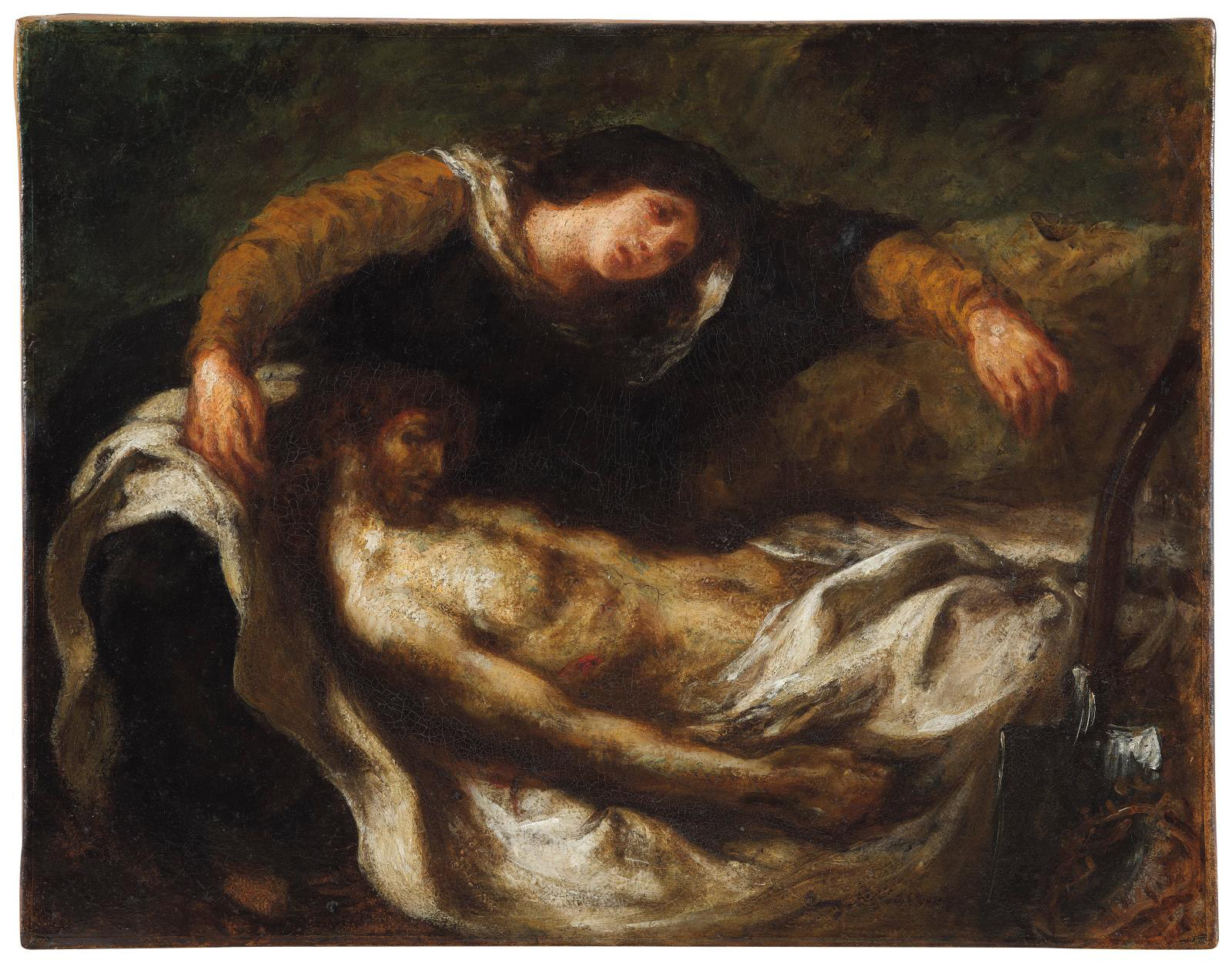 In general, he is famous for his grand Orientalist compositions and of course his Liberty Guiding the People in the Louvre Museum. But Delacroix was also a major religious painter. Many churches still contain his works, like Saint-Sulpice in Paris, while many intended for private use are now in museums, including the Lamentation sur le corps du Christ (Lamentation of Christ) now in the Museum of Fine Arts in Boston. Painted in c. 1847-1848, it was commissioned by the Count of Geloës. While visiting the count in late 1853, Delacroix rediscovered his work and, according to specialist Patrick Noon, was so delighted with it that he felt impelled to make a copy. The artist often explored the same theme several times—as witness the Pietà, which he first painted for the Church of Saint-Denys-du-Saint-Sacrement (Paris) before producing several smaller variants at the request of several dealers—but he never reproduced the same composition twice.

So the work also stands out, because "painted like a watercolor, full of transparency and lightness, it features several aspects characteristic of the artist's late style," says expert Hubert Duchemin. These include broken, "dirty" colors, warm shadows and an abundance of blacks and whites. The painter also chose a tighter, more intimate composition, giving more room to the figure of the Virgin, who covers the body of her son as she forcefully expresses her grief. "Only Delacroix knows how to make religion," said Baudelaire in 1846. It is true: he, better than anyone else in his time, was able to express all his faith, passion and metaphysical anguish in paintings with tragic tones and deeply credible characters. The critics of the time were even shocked by his figures, considering them too realistic, too lively and too sensual.

Tableaux dont DELACROIX, Bijoux, Objets décoratifs
Châlons-en-Champagne - 4, rue Hippolyte-Fontaine - 51000
Jean-Charles d'Ornano
Info and sales conditions
Catalogue
Newsfeed
See all news
We will be on vacation from July 23rd - August 23rd. Wishing you a great summer and see you in September!
Santiago Caltrava Renovates San Gennaro Church in Naples
50% Funding Cuts for Arts and Design Courses Approved by UK Government
Instagram’s New “Sensitive Content” Controls Cause Concern Amongst Artists
Not to be missed
Pre-sale
Under the Protection of Maahes: A Rare Egyptian Bron…
This well-sized bronze statuette dating from Egypt’s Late Period…
Pre-sale
The Op Art of Vasarely and the Discourse of Descarte…
This painting by the master of optical art has never come up for…
Pre-sale
Lalanne and the Charging Rhinoceros
This bronze sculpture with an enamel patina, which is from a private…
Pre-sale
From the Abstraction of Viallat to the Silk Paintings…
Two worlds will come together in Nîmes: those of Vietnamese painter…