If this face looks familiar, it's no wonder. Our drawing is a study Gustav Klimt made for his painted portrait of Fritza Riedler at Vienna’s Belvedere Museum. 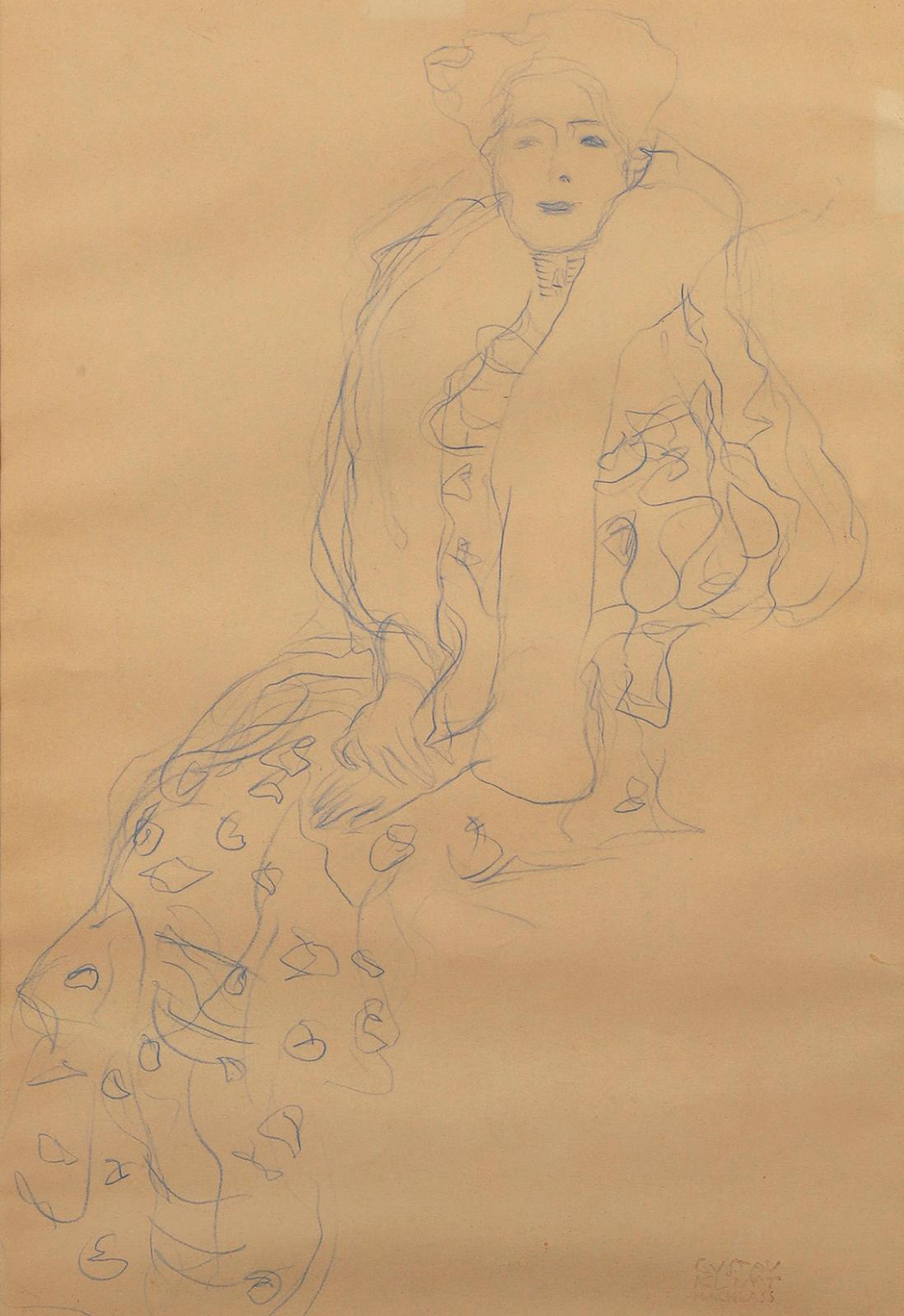 The body is seen in profile, the bust and shoulders in a three-quarter view and the face frontally. This drawing prefigures the definitive painting, in which a pale yellowish-green frilled outfit replaces the boa and dress with Secession patterns. The figure’s hieratic pose makes her look even more majestic. Twenty blue pencil or graphite drawings of the young woman by Gustav Klimt are known. She is standing in some, sitting in others. They were studies for one of the first in a series of large, square portraits (153 x 153 cm, or 60.24 x 60.24 in) where the emblematic figure of the Vienna Secession experimented with gold and silver. Just a fraction of Klimt’s 200 paintings are portraits, mostly of women. Symbolic and sublime, erotic and seductive, they were among his favorite subjects. Fritza Riedler (1860-1927) is sitting in an imposing armchair, a sort of throne with a motif based on the Eye of Horus, a protective symbol in ancient Egypt, whose relief hugs the folds of her dress. Her pink cheeks, black hair and dark eyebrows set off her light skin. Born Friederike Langer, Fritza was a young woman from Viennese high society married to Aloïs Riedler, a wealthy mechanical engineer. She and Klimt probably met in 1904, when he made his first sketches. Painted in Vienna, the portrait was exhibited at a 1907 show in Mannheim before being completed. This was not unusual: Klimt often showed unfinished paintings in public before reworking them. It is said that they sometimes had to be forcibly torn away from him in order to stop the artist from touching them up.

TABLEAUX - ASIE - MOBILIER & OBJETS D'ARTS
Salle 5 - Drouot-Richelieu - 9, rue Drouot - 75009
Crait + Müller
Info and sales conditions
Catalogue
Salerooms
Newsfeed
See all news
Major Donation and New Museum Put Cáceres On the Contemporary Art Map
Is Paris on Course to Become the Leading European Center of the Contemporary Art Market?
New Truce in Century-Long Dispute Over Hugh Lane Collection
The Phillips Collection Blows Out 100 Candles
Not to be missed
Pre-sale
Zhang Xiaogang, Painter of a Lost Generation
Like a quest for identity, her anonymous portraits revive a memory…
Pre-sale
Furniture with all the Artistry of Eclecticism
The bold shape and virtuoso bronzes of this Louis XV-style cartonnier…
Pre-sale
Jean-Michel Folon: Creator of the Elements
Standing nearly three meters high (nearly ten feet), this iconic…
Pre-sale
The Inner World of Yves Tanguy
The top place is bound to go to this 1950 painting: a gift from…