Taken from its celebrated group in the Luxembourg Gardens fountain featuring the four corners of the world, this Chinaman demonstrates the talent of an outstanding 19th-century sculptor. 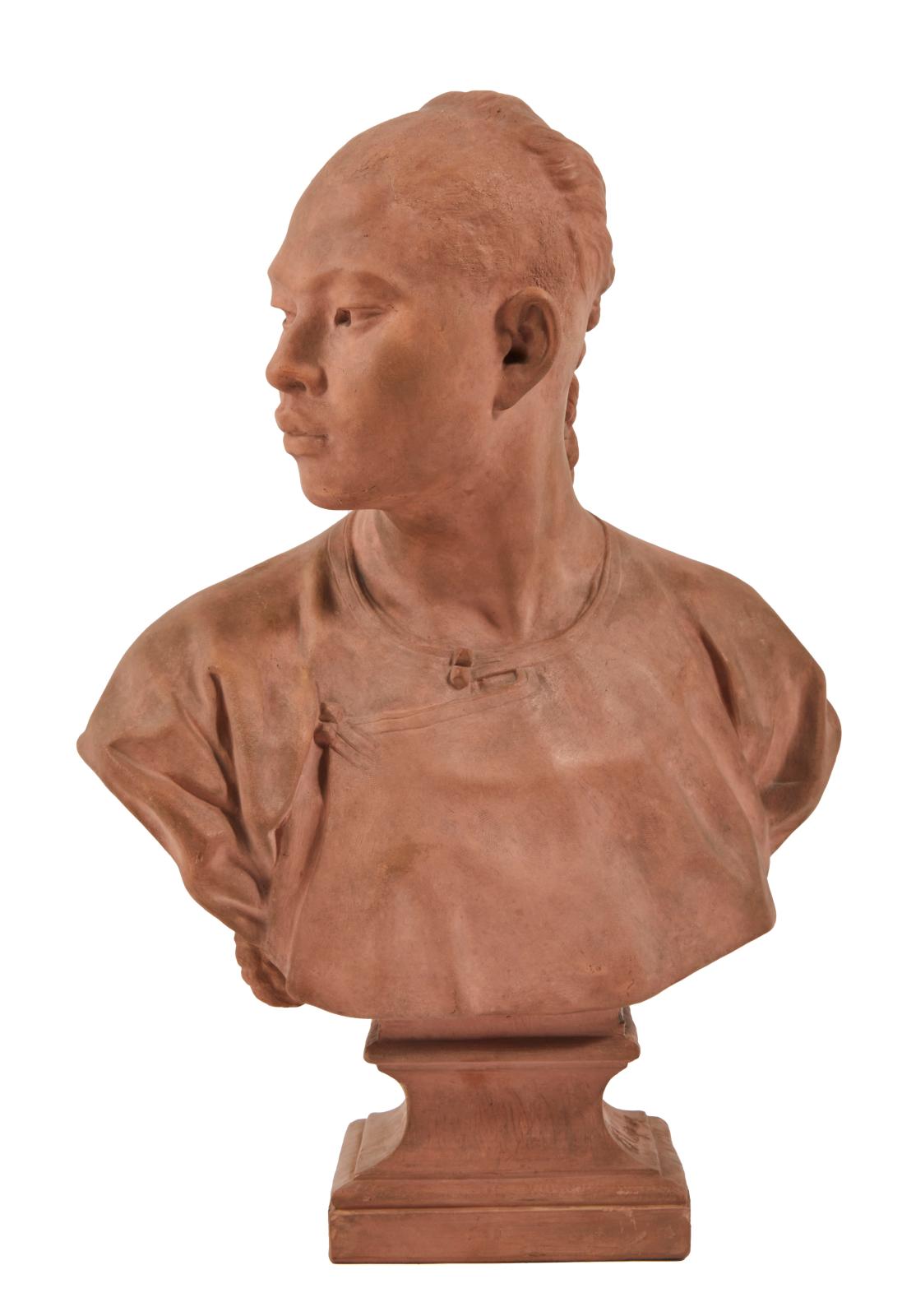 With his piercing gaze and long plait following the movement of his head, this magnificently realistic young man clearly displays his ethnic origins. In 1867, Baron Haussmann, the then Prefect of Paris, commissioned a fountain for the Observatory gardens from the architect Gabriel Davioud, director of the City's works. Davioud suggested offering the project to Jean-Baptiste Carpeaux. The sculptor decided to feature four allegorical figures representing various parts of the world – Europe, America, Africa and Asia– turning around the celestial sphere: "Galileo showed me the way by saying 'The Earth turns,' so that's why I represented the four cardinal points turning with the rotation of the globe." All Carpeaux's genius lay in this ability to choose major themes, which also made for highly original compositions captured in stone or bronze. A Romantic painter who studied with François Rude and Francisque Duret, he revolutionized the art of his time with spectacular works like the terrifying, realistic Ugolino gnawing his own hands, or the famous Dance he produced for the Paris Opera: a work of extraordinary dynamic energy. His group for the Observatory is equally striking for the intense realism of the four ethnic types. Exoticism was then in vogue, and artists were looking at foreign countries and their inhabitants with a fresh eye, particularly after the abolition of slavery, ratified in France in 1848. Some artists were genuinely interested in these men and women from other parts of the globe, and sought to move away from stereotypes. Carpeaux, for example, used living models for the African and Asian figures. While he was working on this monumental group, he made two independent works: rapidly produced and highly successful busts, where Asia is represented by this Chinaman – he used a female model for the final version of the fountain – and Africa by a bust entitled Why Be Born a Slave?. The fountain itself was only cast in 1874, a year before Carpeaux's death, with a single patina – going against the artist's wish to differentiate the colors of the skin.

tableaux anciens XIXe et modernes, mobilier et objets d'art, sculptures, bronzes
Lille - 14, rue des Jardins - 59000
Mercier & Cie
Info and sales conditions
Catalogue
Newsfeed
See all news
Due to the summer holidays there will be a pause in the newsfeed. We will be back Monday, August 24th. Have a wonderful summer vacation!
Met Museum in New York acquires Wangechi Mutu sculptures
US House of Representatives vote to create a national museum dedicated to Latin Americans
Church volunteer confesses to starting the Nantes Cathedral fire
Not to be missed
Pre-sale
Figurative art from van Goyen to Combas and the inescapable…
This 1955 work by Bernard Buffet belongs to a series of around 10…
Pre-sale
Henri Lebasque, painting the zest for life
His soft, nuanced palette captures moments of simple happiness on…
Pre-sale
The Gilles Labrosse collection: fashion throughout the…
Amassed by an impassioned enthusiast, one of the largest private…
Pre-sale
Achille Laugé: Cailhau in perspective
Found during an inventory carried out for an estate in the Var,…