Pauline Bonaparte, icon of the Empire

This portrait of the young Pauline Bonaparte has belonged to the same American family since 1845. It was painted by a recently rediscovered artist, Marie-Victoire Lemoine. 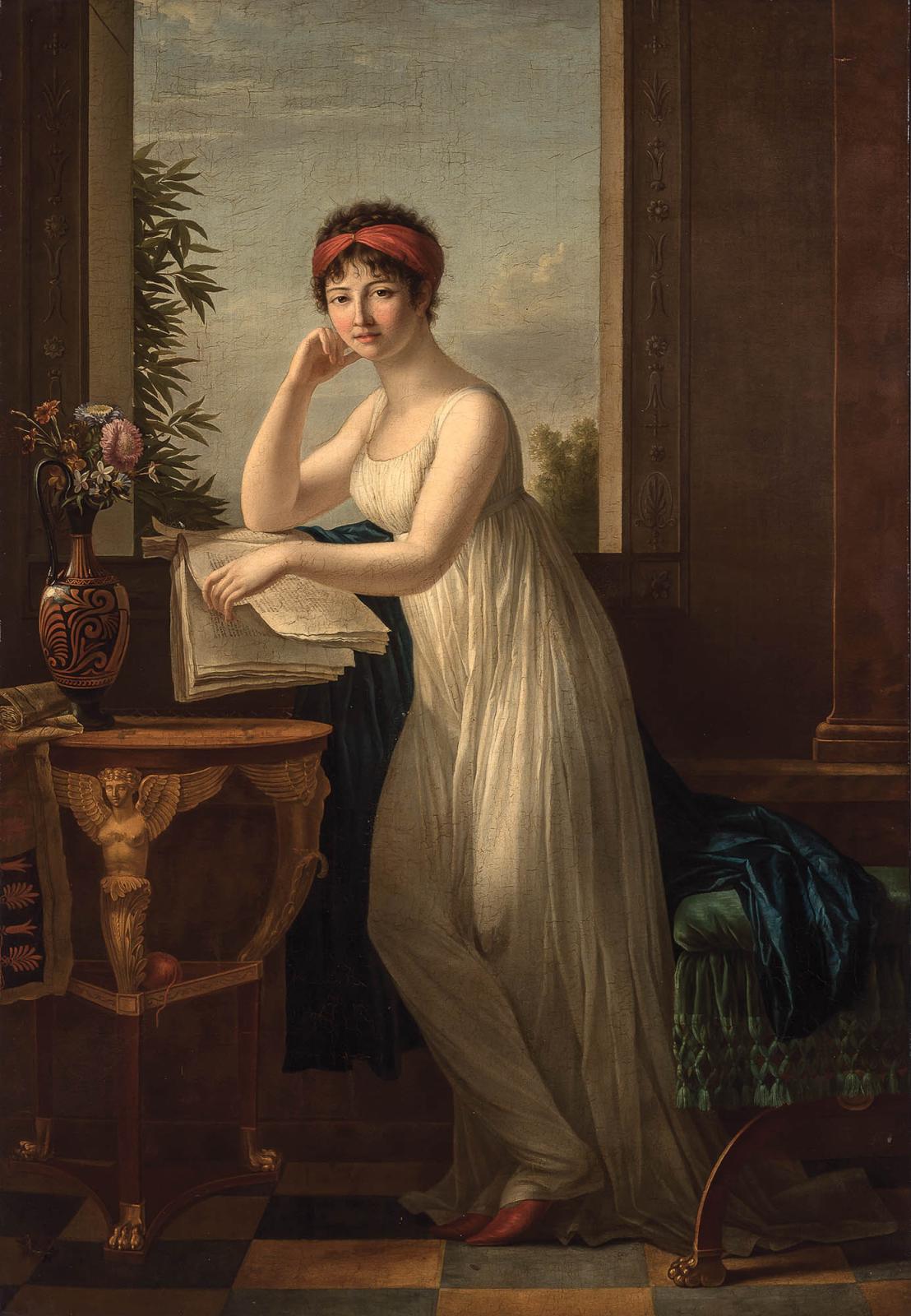 This portrait was exhibited under the rather generic title Une jeune femme appuyée sur le bord d’une croisée (A Young Woman Leaning on the Edge of a Window) at the Salon of 1799, Year VII of the French revolutionary calendar. However, Pauline Bonaparte, Napoleon Bonaparte’s sister, was such an icon of her time that the model’s identity was a secret to no one. Her legendary beauty was carved in marble by Canova and painted by Robert Lefèvre. She had many suitors, but in 1797 Napoleon gave her away in marriage to General Charles Leclerc. In 1798 or 1799, the 19-year-old woman, who by then had a son, Dermide, posed for this imposing 195.6-cm portrait. Dressed in the latest fashion, her head wrapped in a silk turban, she leans against a window whose uprights, carved with a Pompeii-inspired decorative frieze, echo the neoclassical furniture, a curule chair responding to a pedestal table. Its top, supported by winged figures, hosts an oenochoe transformed into a vase. It should be recalled that in 1799, French troops marched into Naples, proclaimed the Parthenopean Republic there and undertook excavations at Pompeii, which had been discovered in 1763 and was already well known. Thus, this portrait of Pauline reflects contemporary issues. The painter, Marie-Victoire Lemoine, lived through turbulent times in the late 18th century. A student of François-Guillaume Ménageot, she probably also received instruction from Élisabeth Vigée Le Brun. A regular at the salons since 1796, Lemoine fell into oblivion for two centuries, along with her sisters, Marie-Denise, Marie-Geneviève and Marie-Élisabeth. As for the portrait, Joseph Bonaparte undoubtedly received it from his sister Pauline before taking it to Bordentown, New Jersey, where he lived for a while after the fall of the Empire. A Mr  Peter Gassner acquired it at the sale dispersing Bonaparte's collection on 17 September 1845. The painting has been in the same family until today, when it is about to leave its home in Washington, D.C.

tableaux anciens, meubles
New York - 175, East, 87th. St - NY-10128
Doyle
Info and sales conditions
News feed
See all news
Original Flash Gordon comic strip to be auctioned in LA
A masterpiece by Sanyu to be auctioned at Drouot
Donation rebuke for the Los Angeles County Museum of Art
Da Vinci exhibition breaks Louvre record with 1.1 million visitors
Not to be missed
Pre-sale
Watch out for these!
A Parisian collector assembled this set of thirteen timepieces over…
Pre-sale
Back to nature
Combining spontaneity and sophistication, this work by Léonard Foujita…
Pre-sale
A snuffbox from the Empress Josephine
Given to the Comte de Barral by the Empress, this snuffbox promises…
Pre-sale
Botanical precision
An orchid brooch in gold and enamel from Tiffany & Co, late 19 th…