When the West meets the Far East, the result is this lacquer panel embellished with a veduta. An example of the exquisite artefacts designed in Japan for export, the cityscape is a work of dazzling refinement and realism. 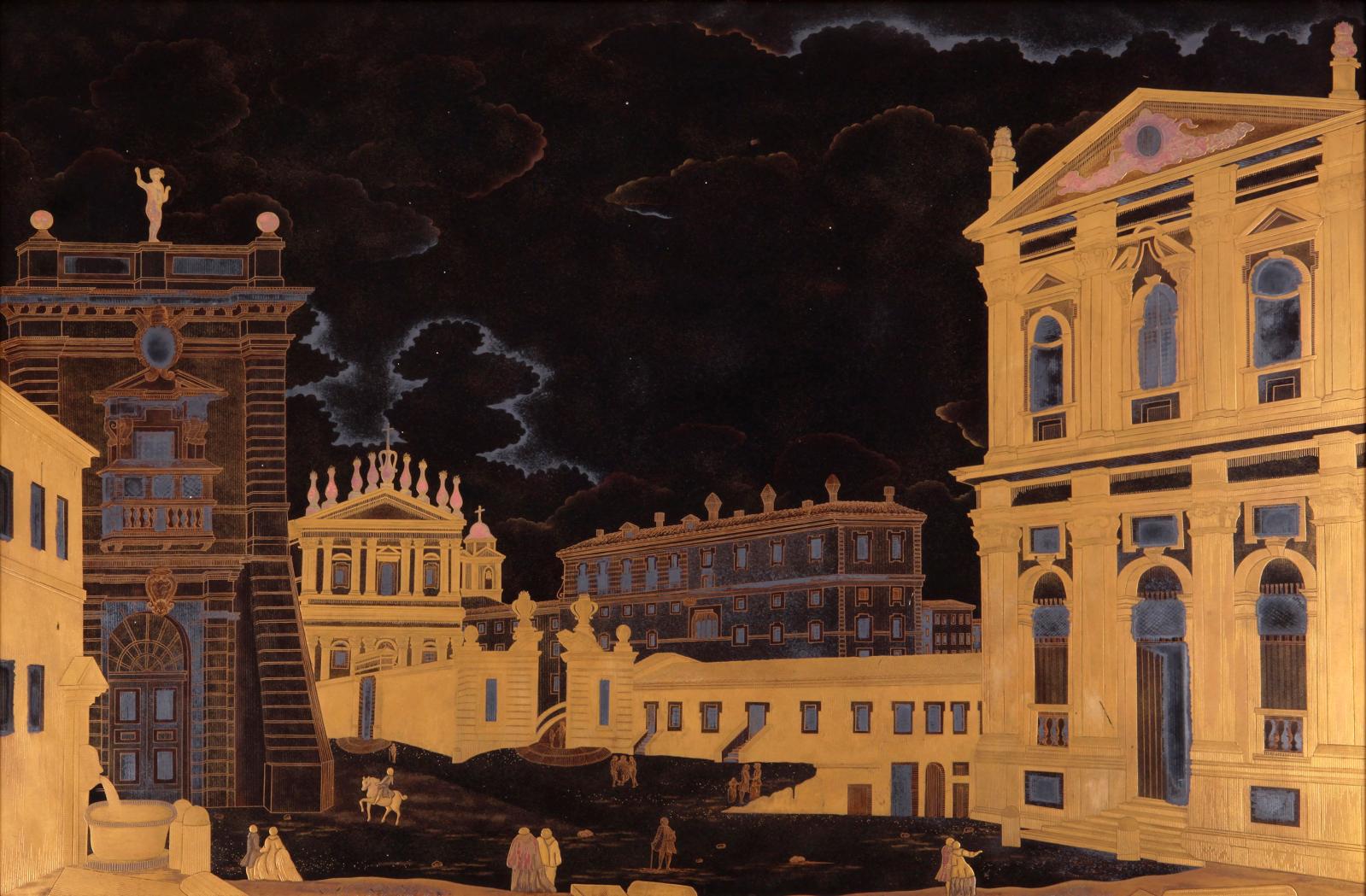 Like a black and gold negative highlighted with brown, pink and grey, this view details the buildings of Piazza Magnanapoli in Rome: on the full panel, from left to right, we recognise the Church of Santi Domenico e Sisto, the entrance to Villa Aldobrandini and the high façade of the Church of Santa Caterina a Magnanapoli. However, the medium is extremely surprising. It is well and truly Japanese lacquer, executed on copper by one of the great Nagasaki lacquer masters during the Edo period, and more precisely the end of the 18th century. Like its counterpart (being sold separately with the same estimate, and featuring another Roman panorama, the View of the Tiber opposite the Mouth of Truth), this remarkable piece lies at the crossroads of two cultures. Firstly, it stands out for the degree of excellence achieved by Japanese artists, such as the hiramaki-e decoration largely used here. This technique, used to obtain a very light relief, consists of sprinkling the subject with gold or silver dust before covering it with transparent lacquer, which is finally delicately polished. The creator of this view also used the more classical togidashi (an accumulation of layers), with no thickness. However, avoiding any Japanese-style motifs, except on the reverse side with its blossoming flowers in mother-of-pearl, the skilful artist faithfully reproduced an engraving printed by Giuseppe Vasi in 1758. This famous Italian engraver (1710-1782), Piranesi’s teacher, produced views of Rome that brought him lifelong success.

Orders and gifts for Europe
We owe these works to the commercial genius of the East India Company directors. From 1641 onwards, the Dutch were the only people allowed to trade with Japan by the Tokugawa dynasty, and they were restricted to Deshima (or Dejima), an island in Nagasaki Bay used as a trading post. In the mid-18th century, a new trend began to emerge: the archipelago's lacquer artists began to reproduce various European compositions from engraving plates and albums. A record was kept of the orders placed by Isaac Titsingh, director of the Company from 1780 to 1784, and by his successor Baron Johan van Reede, who ran the company from 1786 to 1789. For instance, the latter sent his father a collection of lacquerware from Japan, including some oval portraits of Frederick II. Today, these series of medallions depicting the profiles of European emperors, kings and queens remain the best known and most affordable of these luxurious lacquers. But depictions of Western capitals and their monuments very rarely turn up at auction. "These plaques could have been diplomatic gifts," says expert Philippe Delalande, "as witness a View of St Petersburg with the Neva and the Winter Palace, which was given to Catherine II by the Swedish doctor J.A. Stutzer, officiating for the Company from 1787 to 1788". An additional asset that could well take this Roman scene to the heights...

tableaux anciens et modernes, monnaies, orfèvrerie, bijoux, mobilier et objets d'art, miniatures anciennes, art d'Asie
Mayenne - 438, boulevard François-Mitterrand - 53100
Pascal Blouet
Info and sales conditions
Newsfeed
See all news
The artist residency Saint-Ange chooses its 2020 laureates
Luxembourg & Dayan and Venus Over Manhattan galleries join forces to open new space in the Hamptons
Guggenheim launches investigation into complaints of racism and mismanagement
Renaissance portraits together again after 125 years
Not to be missed
Pre-sale
Female subjects
Women are in the limelight at this modern art sale, where a carved…
Pre-sale
The boy king and the virtuoso engraver
The meeting between the young Louis XIV and the sculptor Jean Varin…
Pre-sale
Superb tapestries from the Tchaloyan collection
Over fifty pictures in wool and silk dating from the 15 th to the…
Pre-sale
The flames of love that recall Versailles
Created in the late 18 th century, or more probably even in the…