Jan Fris: the Bonfire of the Vanities

This Dutch artist, whose life is somewhat of a mystery, produced meticulously painted still lifes, including some outstanding vanitases. A fine example of this small corpus will soon be demonstrating his virtuosity. 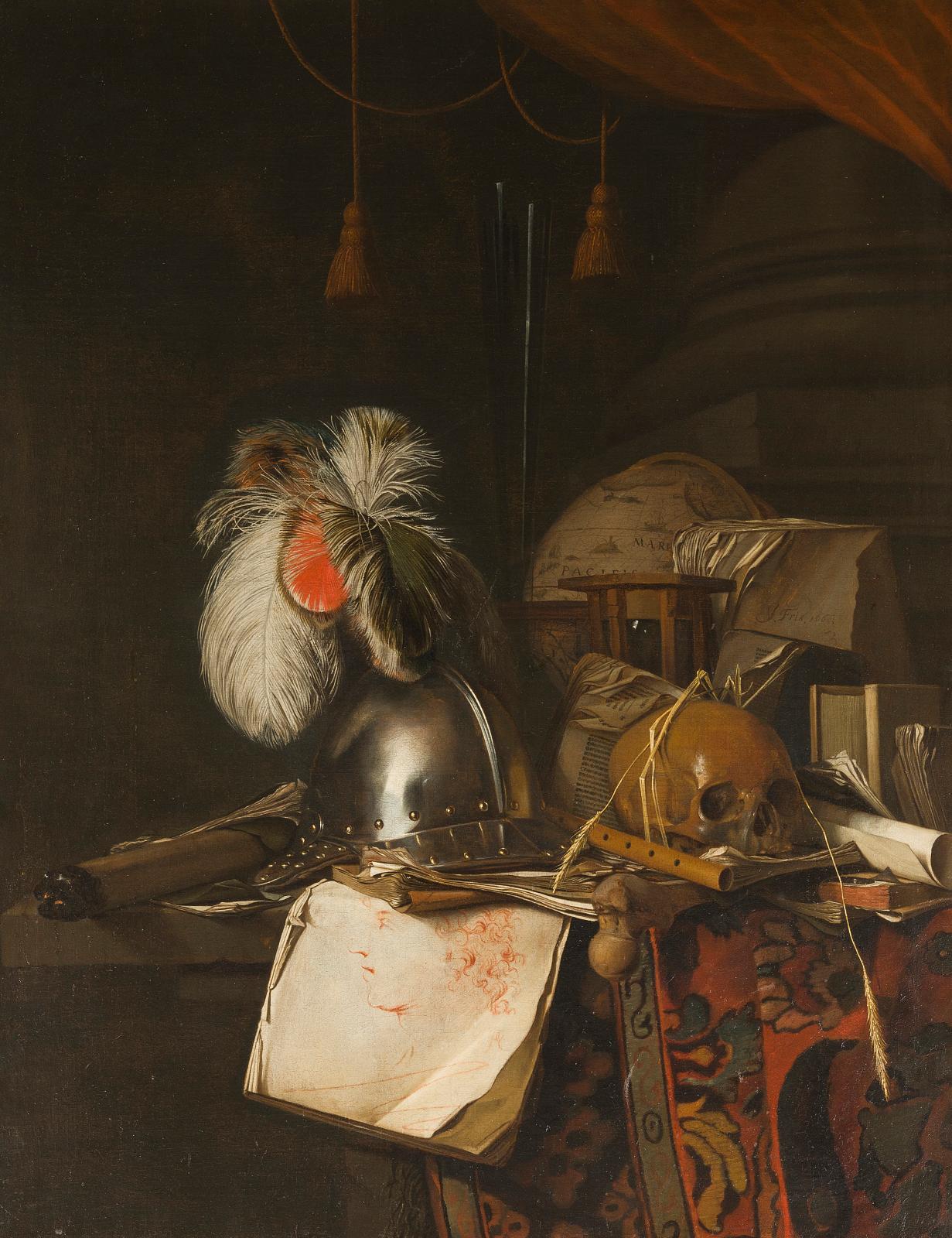 Although the eye is instantly drawn to the metallic glow of the helmet, it quickly shifts to the patinated skull and humerus placed beside it… A dramatic contrast designating the genre explored by the artist – a vanitas, where the usual components are displayed around a strange combination: not only symbols of luxury, knowledge and entertainment, like the Persian carpet, the manuscripts, the globe and the flute, but also signs of passing time and the fragility of life, emphasised by the hourglass, the candle burning down, dried wheat stalks and the tall drawn glass that seems to divide the painting in two. The human element, though decidedly absent, is nonetheless evoked by a red chalk drawing of a male head with curly hair, providing an area of light colour that enlivens the scene. A somewhat unusual accessory in this type of composition, the helmet (an allegory of glory and appearances), would have indicated the artist, Jan Fris, if he hadn't already signed and dated his work (1666), as the same military headgear, recognisable from its studded visor and central rib, is found in at least two other pieces by the Dutch painter: a Vanitas with helmet, statue of Apollo and violin sold at Drouot in March 2011, and another with musical instruments (Christie's London, July 2004).

A still life specialist
Jan Fris was born in Amsterdam, where he spent his entire career. We know little about him, and only fifteen or so of his paintings are extant today, all dating from between 1647 and 1672. Early on, he preferred small formats on panel, scenes with smoking paraphernalia and "monochrome banquets " similar to those by Pieter Claesz and Jan van de Velde III. But in the 1660s he began to paint larger, more colourful pictures, and to focus entirely on still lifes, with a pronounced penchant for vanitases. Bought by its current owners from Sotheby's London on 30 November 1983, this painting here sports an impressive pedigree, because it had previously belonged to the collections of the Marquises of Lothian in Scotland. So we can assume that it was acquired by their ancestor, Robert Kerr (1636-1703), the first Marquis of Lothian. The aristocrat was a keen admirer of Dutch still lifes, and even went to Amsterdam to buy directly from painters like Pieter Gerritsz van Roestraten and Edwaert Collier. And maybe Jan Fris...?

tableaux anciens, XIXe et modernes, mobilier et objets d'art du XVIe au XIXe, art d'Asie, arts décoratifs du XXe
Bordeaux - 12-14, rue Peyronnet - 33800
Briscadieu
Info and sales conditions
Catalogue
Results
Newsfeed
See all news
The artist residency Saint-Ange chooses its 2020 laureates
Luxembourg & Dayan and Venus Over Manhattan galleries join forces to open new space in the Hamptons
Guggenheim launches investigation into complaints of racism and mismanagement
Renaissance portraits together again after 125 years
Not to be missed
Pre-sale
Female subjects
Women are in the limelight at this modern art sale, where a carved…
Pre-sale
The boy king and the virtuoso engraver
The meeting between the young Louis XIV and the sculptor Jean Varin…
Pre-sale
Superb tapestries from the Tchaloyan collection
Over fifty pictures in wool and silk dating from the 15 th to the…
Pre-sale
The flames of love that recall Versailles
Created in the late 18 th century, or more probably even in the…