This vigorous watercolor from the beginning of the artist's stay in Rome has both rural and classical elements. 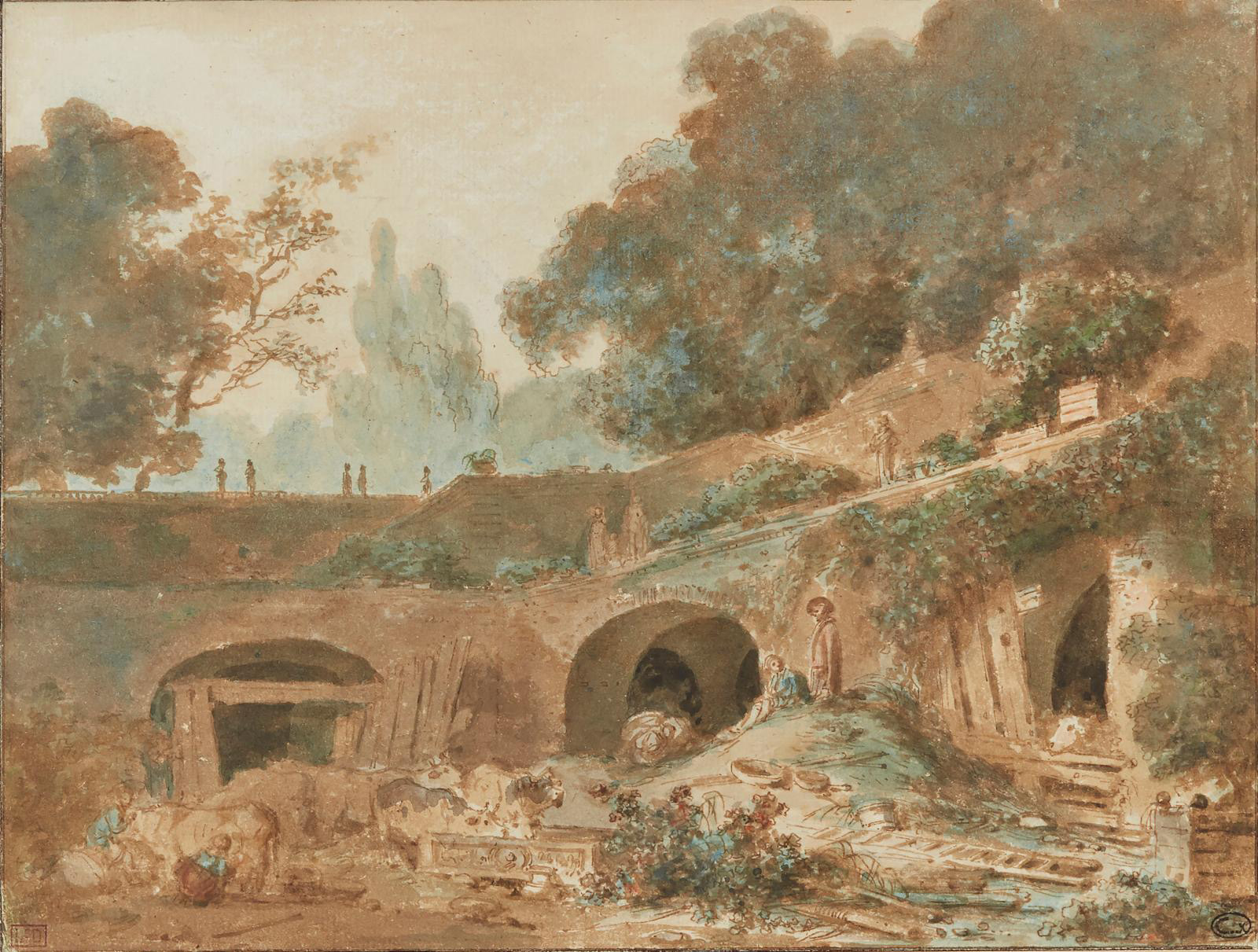 Did this landscape exist or did Jean-Honoré Fragonard invent it? The result is charming, at any rate, with oxen jostling each other to drink at a Roman marble sarcophagus transformed into a trough, peasants and gardeners at work, flowers and brambles growing here and there, a girl milking a cow, a ruin housing a stable, and a ladder carelessly placed on the ground. Above this scene, there is a classical, well-ordered park with an orange tree in a wooden planter and sculptures dotting the terraces. The upper part of the drawing returns to the foliage of the trees. This is Man and Nature in harmony. The work evokes a small group of washes from 1758 - 1760, including Parc d’une villa italienne (Park in an Italian Villa) now owned by Geneva collector Jean Bonna, and Scène dans un parc (Scene in a Park) in the Cleveland Museum.

Admitted to the French Academy in Rome in late 1756 by Charles-Joseph Natoire, Fragonard, initially somewhat at sea, soon found his models. He was helped with this by two decisive friendships with Hubert Robert, who had already been in the Eternal City for two years, and the Abbé de Saint-Non, a wealthy young art lover who arrived in 1759 and immediately conceived a boundless admiration for him, taking him to work in Tivoli. These five energetic years were among Fragonard's most productive, enabling him to enter Paris in September 1761 as an accomplished painter, with Saint-Non as his patron.

TABLEAUX & DESSINS - MOBILIER & OBJETS D'ART - ASIE - ART DECO
Salle 10 - Hôtel Drouot - 9, rue Drouot - 75009
Audap & Associés
Info and sales conditions
Catalogue
Salerooms
Newsfeed
See all news
We will be on vacation from July 23rd - August 23rd. Wishing you a great summer and see you in September!
Santiago Caltrava Renovates San Gennaro Church in Naples
50% Funding Cuts for Arts and Design Courses Approved by UK Government
Instagram’s New “Sensitive Content” Controls Cause Concern Amongst Artists
Not to be missed
Pre-sale
Under the Protection of Maahes: A Rare Egyptian Bron…
This well-sized bronze statuette dating from Egypt’s Late Period…
Pre-sale
The Op Art of Vasarely and the Discourse of Descarte…
This painting by the master of optical art has never come up for…
Pre-sale
Lalanne and the Charging Rhinoceros
This bronze sculpture with an enamel patina, which is from a private…
Pre-sale
From the Abstraction of Viallat to the Silk Paintings…
Two worlds will come together in Nîmes: those of Vietnamese painter…