Coming from the estate of Baron Alain de Montgascon, this 17th century portrait shows Henri IV and Marie de' Medici with their children, along with their friend and faithful servant Guillaume Fouquet de La Varenne. 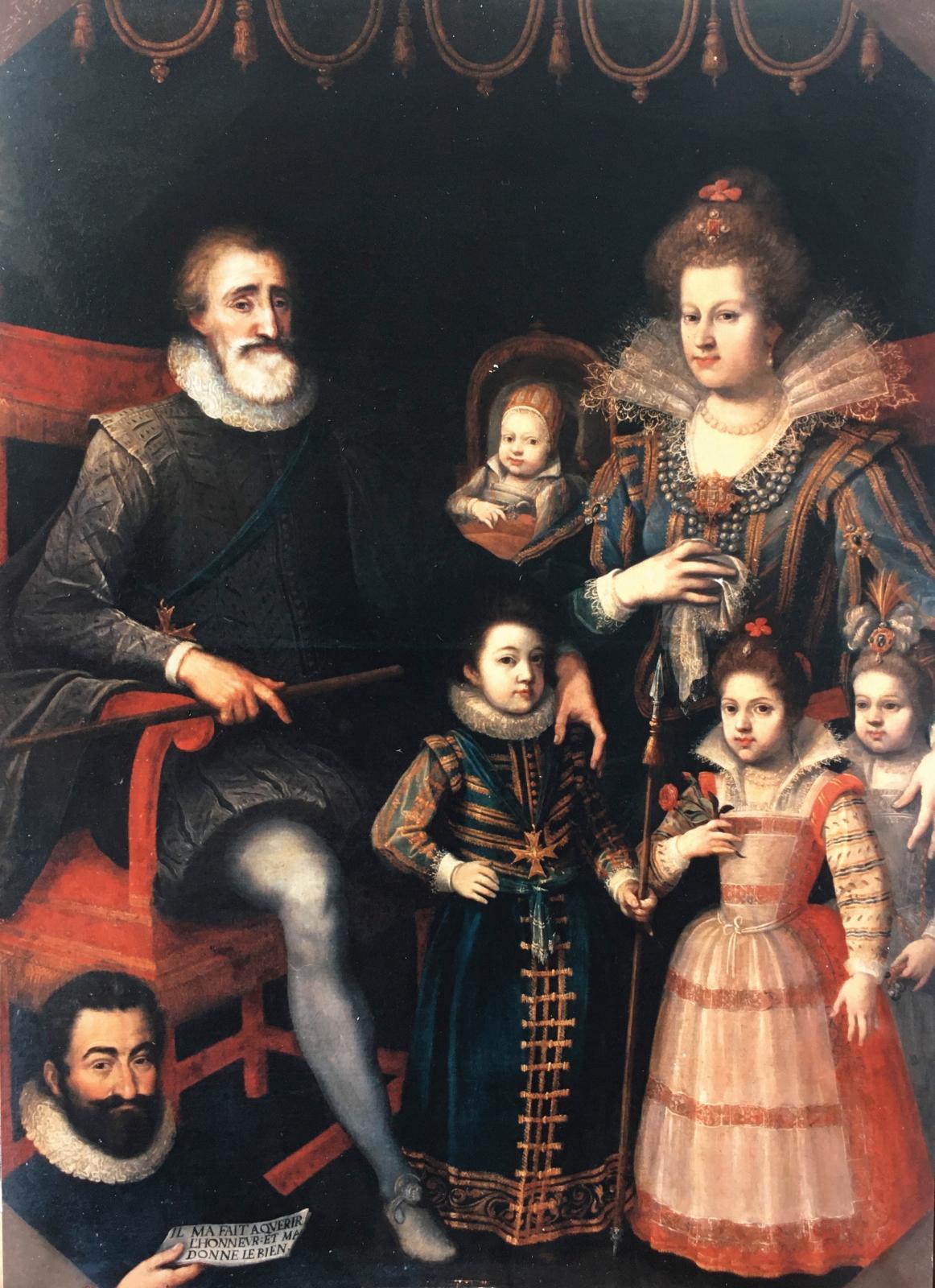 This large painting nearly 2 metres high has always remained in the same family: that of the man who commissioned it, Marquis Guillaume Fouquet de La Varenne (1560-1616). The latter, whom we see here beside the royal family, was one of Henri IV's most trusted men, and certainly one of the closest to him. He even obtained the privilege of having his tomb built in the church of the college of La Flèche (Sarthe), at the foot of the urn that contained the king's heart after his death.
The son of the Duchesse de Vendôme's écuyer de cuisine ("yeoman of the pantry"), Martin Fouquet, and Guillemine Beaufils, originally from La Flèche (where he was born), Guillaume began his career in 1578 working for Catherine de Bourbon, sister of the future sovereign. The king soon noticed him and in 1580 made him his écuyer portemanteau (cloakbearer): a highly unusual rank for someone who was not a noble. And he moved still higher: thanks to his qualities as a soldier and diplomat, he later took part in several victories, including the capture of Angoulême's stronghold from the League (1580), as well as Coutras (1587), Arques (1589) and Fontaine-Française (1595). He was then sent on a mission to Spain and London, and assisted the Jesuits' return to France from 1603. As governor of La Flèche, he supervised the development of the city and its prosperity.
This commemorative portrait shows Fouquet de La Varenne holding a piece of paper in his hand, which reads: "He brought me honour and was good to me." Mentioned in a post-mortem inventory of 1699, at that point the painting was hanging above the fireplace in the Room of Virtues at the château belonging to the Fouquets de la Varenne. It then passed down through the Champagne and Choiseul families before returning to La Flèche, where in 1936 it was placed by the Baronne de Montgascon in the Templerie in Rue de la Tour-d'Auvergne, remaining there until it was put up for sale.

Succession of Baron Alain de Montgascon at the request of Maître Pelzer : Sale Furniture, Works of art, Silverware, Jewellery, Paintings
Duval - La Flèche - 5, rue Pape Carpantier - 72200
Cyril Duval Enchères
Info and sales conditions
Catalogue
Newsfeed
See all news
David Zwirner to layoff 20% of its staff
Underwater discovery of ancient aboriginal artifacts in Western Australia
Massimo Osanna named new Director-General of Italian museums
Boris Johnson pledges £1.5 billion for UK arts and cultural organizations
Not to be missed
Pre-sale
Female subjects
Women are in the limelight at this modern art sale, where a carved…
Pre-sale
The boy king and the virtuoso engraver
The meeting between the young Louis XIV and the sculptor Jean Varin…
Pre-sale
Superb tapestries from the Tchaloyan collection
Over fifty pictures in wool and silk dating from the 15 th to the…
Pre-sale
The flames of love that recall Versailles
Created in the late 18 th century, or more probably even in the…