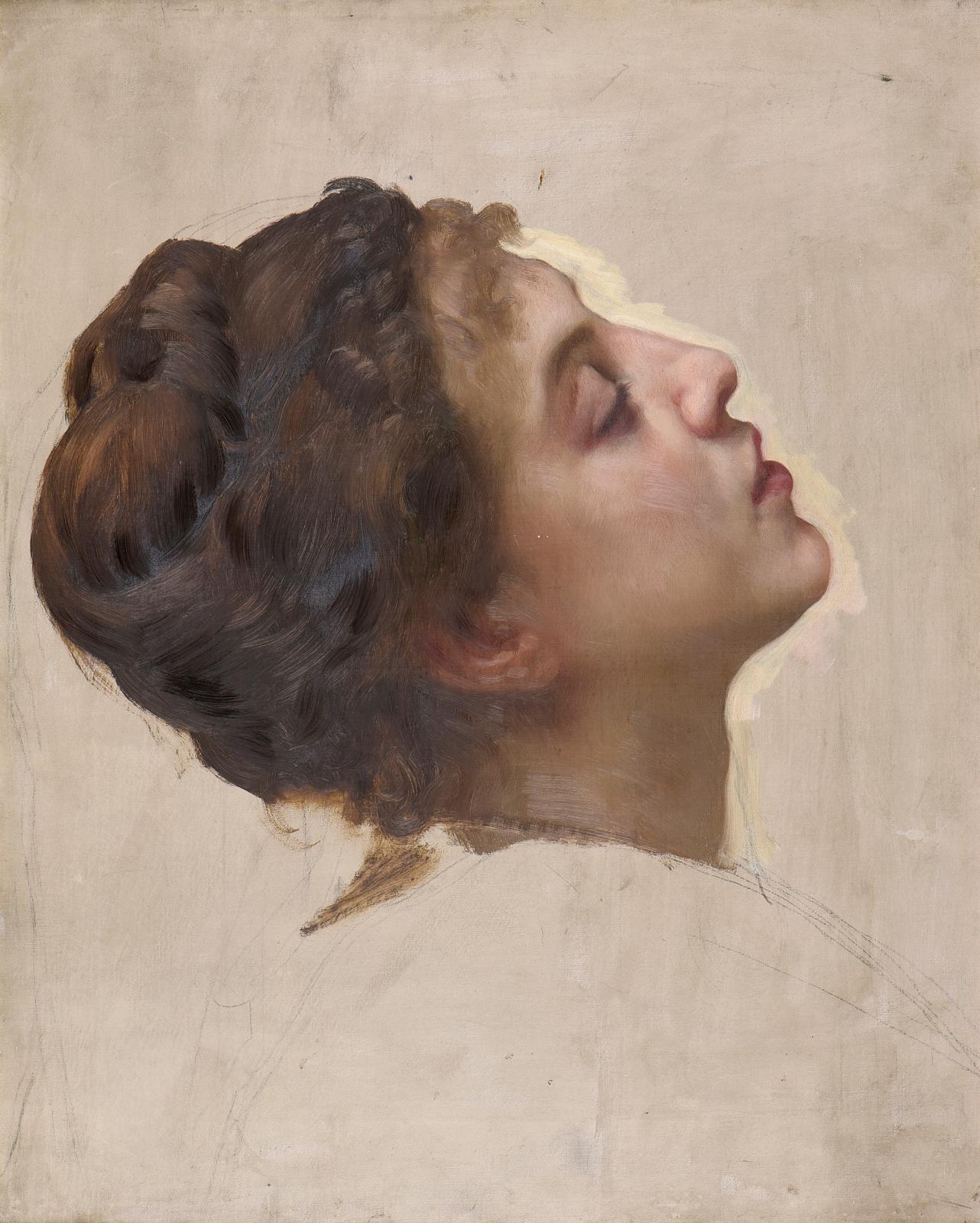 William Bouguereau, one of the most gifted painters of his generation, suddenly plummeted from the heights of fame to the depths of obscurity after his death in 1905. He was considered unworthy of attention until the late 1970s, when "art pompier" returned to favour. His work was finally rehabilitated and even consecrated, notably with the spring 1984 retrospective at the Petit Palais in Paris (before Montreal and Hartford). Visitors could see that this famous smooth, almost photographic technique, called "academic", was nonetheless endowed with great sensitivity, even a strange sensuality. The unique group reappearing in Lyon today—16 paintings and works on paper—strengthens that impression, the history of which is first among its assets. Kept by the artist in his studio until his death, they remained in his descendants’ hands until the wife of his grandson, Mr Vincens-Bouguereau, gave them to their last owner, a collector from Lyon and a family friend.

Early and travel drawings
Bouguereau was very fond of these selected works, early sketches and studies for the great compositions of maturity. They document his long career. It began with the Prix de Rome in September 1850, which was accompanied by a long stay in the Eternal City that gave him an opportunity "to draw recurring motifs that would reappear in his paintings throughout his life," says expert Olivier Houg. Two lots illustrate this fondness for figures he had come across in Italy, including a very beautiful Portrait of an Italian woman in Local Dress in watercolour and graphite on paper (€6,000/8,000). The inscription "Velletri" indicates that the drawing was made in that small village near Rome. A true trademark of the painter, only part of the pencil composition has been coloured, and in a very accomplished way, while the other part is summed up in a few brief strokes. Copying the masters was also part of his apprenticeship, and Bouguereau devoted himself to it from Parma to Naples. In Paris, he copied Eugène Delacroix's Women of Algiers (€4,000/6,000), recalling his boundless admiration for the romantic painter, putting him at the top of French art with Jean-Dominique Ingres.

Preparatory studies for famous paintings and "reductions"
On examination, most of the paintings presented turn out to be known and listed studies of the artist's compositions. Although unsigned (which confirms that they were not intended to be sold as is), they are the result of very detailed work, real paintings in their own right. "The research,” says Mr Houg, “always carried out from life, has an expressiveness that does not necessarily exist in the works delivered by the artist." His favourite inspirations, such as Élize Brugière, are found in some of his paintings. This 1895-1896 portrait shows her in profile (€15,000/20,000). Portrait of a Woman with an Upside-down Head is even more impressive because of the ecstatic expression on the woman’s face. (€15,000/20,000). The unidentified model was also Mary in the painting decorating the chapel of the Virgin at the Church of Saint-Vincent-de-Paul in Paris (1888).
Children, dear to Bouguereau, who put them in many of his genre paintings, also appear in this unexpected selection. For €10,000/15,000, the Portrait of a Girl with a Blue Ribbon, whose composition, letting a large part of the grey preparation show through, features the same model as that of Child’s Head, 1872 (Drexel Museum and Collection, Philadelphia). Encouraged by his best paintings’ success, Bouguereau found a way to make them more widely available: reduction. Damien Bartoli, author of the catalogue raisonné, has listed over 70. One of them, Loin du pays (Far from Home), should be the highlight of our session with a range of €40,000/60,000. There are two little street girls, one preparing to play the violin, the other reaching out. However, Mr Houg says, "the painter often made these famous reductions at his dealers’ request"—further proof, if any were needed, of Bouguereau’s great fame during his lifetime.

SUCCESSION de M. X : Rare ensemble d'oeuvres de William BOUGUEREAU et importante collection de verreries
Lyon - 8, rue de Castries - 69002
Conan Hôtel d’Ainay - Cécile Conan Fillatre Commissaire-Priseur Judiciaire
Info and sales conditions
Catalogue
Newsfeed
See all news
We will be on vacation from July 23rd - August 23rd. Wishing you a great summer and see you in September!
Santiago Caltrava Renovates San Gennaro Church in Naples
50% Funding Cuts for Arts and Design Courses Approved by UK Government
Instagram’s New “Sensitive Content” Controls Cause Concern Amongst Artists
Not to be missed
Pre-sale
Under the Protection of Maahes: A Rare Egyptian Bron…
This well-sized bronze statuette dating from Egypt’s Late Period…
Pre-sale
The Op Art of Vasarely and the Discourse of Descarte…
This painting by the master of optical art has never come up for…
Pre-sale
Lalanne and the Charging Rhinoceros
This bronze sculpture with an enamel patina, which is from a private…
Pre-sale
From the Abstraction of Viallat to the Silk Paintings…
Two worlds will come together in Nîmes: those of Vietnamese painter…