Olympism and its universal values

The only extant drawing for the Olympic flag project, this genuine museum piece should galvanise the sports world. A work symbolising the spirit of the union of nations advocated by Pierre de Coubertin. 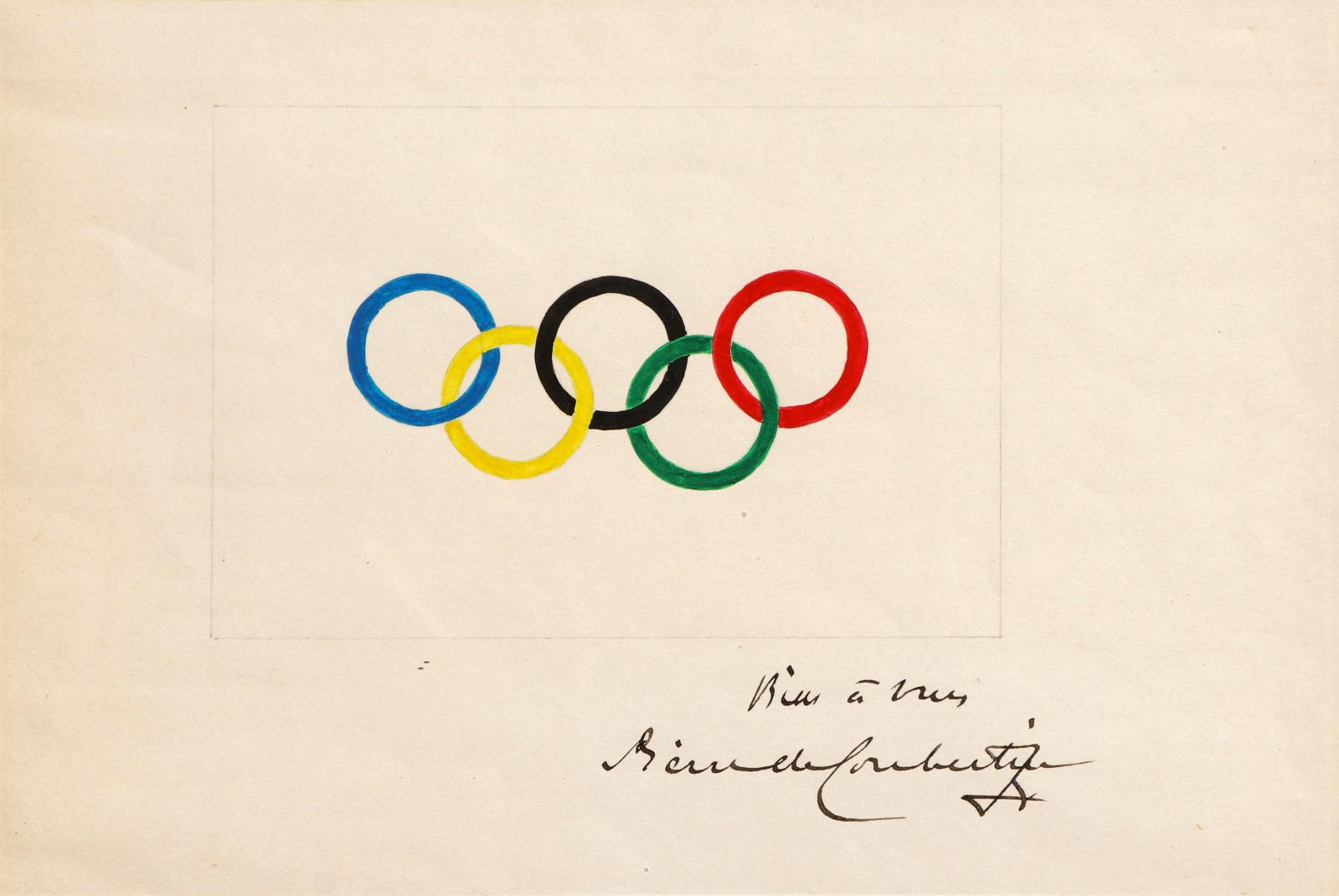 Citius, altius, fortius: "Faster, higher, stronger", proclaims the motto inscribed on the frame of this drawing by Baron Pierre de Coubertin. Identical to the original in every detail, and the only one to survive, it was offered in 1913 by its creator to Lucien Perrot, one of his supporters in Lausanne – the city where the International Olympic Committee's headquarters were established in 1915. This preparatory sketch for the Olympic flag, which remained in Mr. Perrot's family until it was bought by its current Swiss owner, has never been to auction before. It illustrates the fight of a man who, though a French aristocrat, did his utmost to promote the principles of liberty, fraternity and equality also supported by the Third Republic. As a child, the young Pierre was traumatized by the Franco-Prussian war of 1870 and took refuge in studies and an imaginary world, soon nourished by classical culture and the digs carried out in Ancient Olympia from 1874 onwards. Abandoning his parents' ambitions for him, he turned to the National Education system with the idea of reforming it. During a trip to England, he visited schools where rugby had recently been introduced. Sports, with their social and educational values, inspired Pierre de Coubertin to advocate for them in France, later extending his huge project to the entire world. Then in 1890, he discovered a country sports festival in Much Wenlock (Shropshire), which for forty years had taken inspiration from the Olympic Games of Ancient Greece.

Hope for a new world
He conceived a new dream: to revive the games of classical antiquity to promote sports and unite nations in peace and friendship. Though often disparaged, he remained stalwart, and finally attended the first-ever modern Olympic Games in 1896 in Athens. In the end, this eminently symbolic event representing hope for a new world obtained a consensus. But it needed an emblem to embody the existence of the games. So in 1913, Pierre, raised in an artistic milieu as the son of the religious painter Charles de Coubertin, took up his pencil. He was certainly inspired by the two intertwined rings of the Union des Sociétés de Sports Athlétiques founded in 1887-1888 when he created these “five regularly interlaced rings of different colors […] standing out from a white background. [They] represent the five parts of the world now won over to the cause of Olympism. What is more, the six colors reproduce those of all nations without exception.” Using his original drawing, now lost, Le Bon Marché manufactured between 300 and 500 copies of this flag, which flew for the first time on 5 April 1914 in Alexandria for the Pan-Egyptian Games.

SPORTS MEMORABILIA
Cannes - 20, rue Jean-Jaurès - 06400
Cannes Enchères
Info and sales conditions
Catalogue
Newsfeed
See all news
Due to the summer holidays there will be a pause in the newsfeed. We will be back Monday, August 24th. Have a wonderful summer vacation!
Met Museum in New York acquires Wangechi Mutu sculptures
US House of Representatives vote to create a national museum dedicated to Latin Americans
Church volunteer confesses to starting the Nantes Cathedral fire
Not to be missed
Pre-sale
Figurative art from van Goyen to Combas and the inescapable…
This 1955 work by Bernard Buffet belongs to a series of around 10…
Pre-sale
Henri Lebasque, painting the zest for life
His soft, nuanced palette captures moments of simple happiness on…
Pre-sale
The Gilles Labrosse collection: fashion throughout the…
Amassed by an impassioned enthusiast, one of the largest private…
Pre-sale
Achille Laugé: Cailhau in perspective
Found during an inventory carried out for an estate in the Var,…