The three shattered lives of the Amaury Taittinger Collection

Louis XVII, Napoleon II and the Prince Imperial… These young figures in the history of France all had brief, disrupted lives. A common denominator that inspired the collector to bring together all the evidence he could – soon to make an appearance at auction. 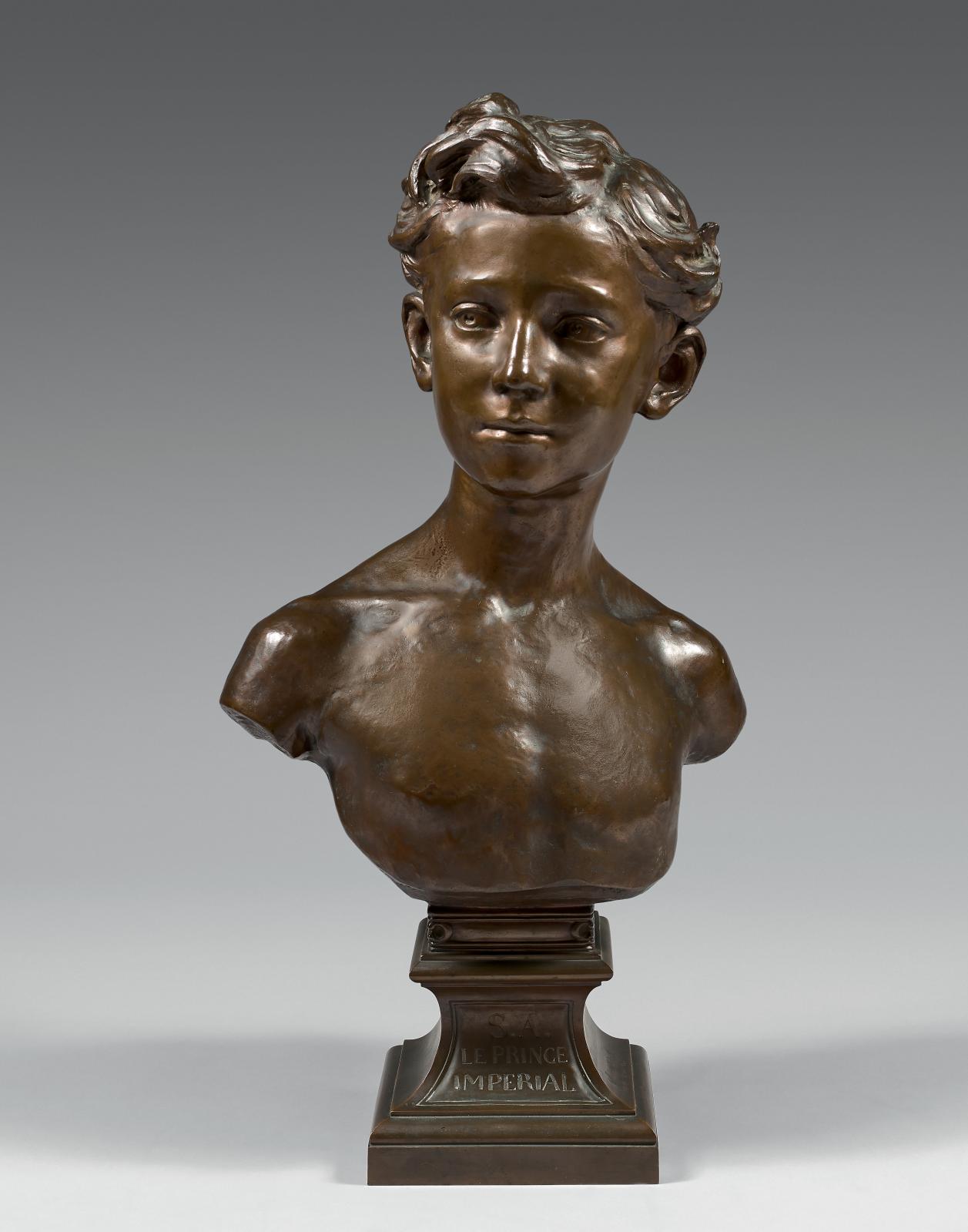 In the world of historic memento collections, this group assembled by Amaury Taittinger stands apart for its distinctly touching quality. For once, it is not kings, emperors or empresses who come to life through these memories, but children – though they were princes, too. Though their futures looked bright at birth, they were drawn into tragic fates against their will, which continue to fascinate "a select circle of collectors both within and outside France", says expert Thierry Bodin.

Relics of the prisoner in the Temple

Born on 27 March 1785, Louis-Charles of France was affected from the age of 4 by the fate of his parents, Louis XVI and Marie-Antoinette, who were forced to move to the Tuileries Palace in October 1789. "The fact that there are so few objects that belonged to him, particularly any handwritten material, because he lived such a short time, makes him the most sought-after of the three princes," says Thierry Bodin. The precious relic here consists of some homework dating from 1790-1791, where the little boy has written his name between lines traced in pencil: on the second page, he has written the following words: “Gouvenement. Gouvernement. Harmonique. Impassibilité. Louis Charles”: evidence that will cost some €8,000/10,000. The child was seen as the heir to the throne at that time, as witness a gold and tortoiseshell snuffbox, expected to make about €5,000, which features a portrait of the little prince wearing the Ribbon of the Order of the Holy Ghost, with the Federation celebrations of 14 July 1792 in the background. But soon after, on 13 August, the royal family were transferred to the Temple prison. Once Louis XVI had been executed, the child, considered as Louis XVII by the royalists, became the focal point for every kind of hatred. On 1 July 1793, he was separated for ever from his sister, Madame Royale, his aunt Élisabeth and his mother. Incidentally, those interested in Marie Antoinette's last hours can buy "the ribbon from the bonnet worn by the Queen the day before her death" as indicated by the accompanying manuscript, preserved in a gold and enamel snuffbox with a portrait of Louis XVI painted by Louis Marie Sicard (€20,000/25,000). From then on, after the boy was handed over to his guardian, Antoine Simon, then isolated in a dark room out of sight, his health deteriorated due to his cruel psychological and physical treatment. On 29 July 1794, Paul Barras, a member of the Convention who visited the prisoners in the Temple, described on two sheets of paper (estimated at €3,000/4,000) the pitiful state of the nine-year-old child, now unable to rise. Despite treatment late in the day, Louis XVII – who also seems to have developed the bone tuberculosis that killed his elder brother Louis-Joseph – died on 8 June 1795.

From the Tuileries to Schönbrunn: the solitary "Eaglet "

The more plentiful "mementoes of the youth of the King of Rome are enormously popular now, with a high, extremely stable price index," says the expert Bernard Croissy. Born on 20 March 1811, Napoléon François Joseph Charles kissed his father, Napoleon I, for the last time on 24 January 1814, the day the Emperor left for the French campaign. For the first three years of his life, he was brought up in the Tuileries Palace by his governess, the Comtesse de Montesquiou. A watercolour by Jean-François Tourcaty given to this lady – nicknamed “Maman Quiou” by the little boy – shows The King of Rome aged two taking his first steps with a baby-walker (€10,000/15,000). A series of snuffboxes depicting the prince's entourage contains a magnificent piece in gold by Étienne Nitot, with a miniature of Napoleon I executed under the supervision of Robert Lefèvre (€30,000/40,000). On 23 April 1814, Marie-Louise returned to Vienna with her son. At the end of the Hundred Days, on 22 June 1815 Napoleon I abdicated in favour of his son, who became Napoleon II… for two weeks. Then began a melancholic childhood in Austria for the young boy, dubbed the "Aiglon" (eaglet) by Victor Hugo. His grandfather, Emperor Francis I, dismissed the four-year-old's governess. He wrote to her: “Dear mamma Montesquiou, I think of you all day long and I love you with all my heart." (€2,500/3,000). His mother Marie-Louise, now the Duchess of Parma and living in Italy with her second husband, General Neipperg, lost interest in him. The prince died on 22 July 1832, felled by tuberculosis.

A Prince Imperial with every virtue

Louis-Napoleon is the one who has left the most traces. "In the late 19th century, admirers built up major collections around the Prince Imperial, including Abbé Misset. Closer to our times, Christopher Forbes acquired several mementoes of him, sold at the sale of 5 and 6 March 2016 by Jean-Pierre Osenat," says Amaury Taittinger. Adulated by his parents, Napoleon III and Empress Eugénie, the heir to the throne, born on 16 March 1856 and nicknamed "Loulou", grew up at the Tuileries court. Here various aspects of his father's history are evoked, like a gold snuffbox of 1851-1852, with a portrait of Louis Napoleon Bonaparte (still President of the Republic), estimated at €15,000/20,000. Blessed with a handsome physique, the little prince was a delight to artists, who left numerous portraits of him. The key lot in this session is one by Jean-Baptiste Carpeaux: a vibrantly alive bust of the young boy in patinated bronze, cast by Ferdinand Barbedienne, dated "Easter 1865" (€12,000/15,000). But another idyllic childhood was brought to an end, this time by the Prussian War that began in 1870, and exile in England. When his father died in 1873, Louis-Napoleon became a claimant to the imperial throne, as Napoleon IV. He volunteered to fight alongside the British in the Zulu War in South Africa. It was a fateful decision: on 1 June 1879, at Itelezi, he fell, dying from seventeen assegai wounds. The report identifying the Prince Imperial's body, drawn up by the doctors Corvisart and Larrey on 11 July, will be on sale for €2,500/3,000.

What made you decide to create a collection around the tragic fates of these three princes?
I was deeply moved by the similarities between their destinies and the devastating effect various events had on their lives, which were changed forever…

How did you start and then build up your collection?
Because of our family tradition, I'd always been interested in Napoleonic mementoes, and then one day, around twenty years ago, I bought a collection of the Prince Imperial's autographs. From there I broadened my interest to the two other luckless heirs to the throne. I was keen to build up a comprehensive collection for each one, containing essential pieces from their births to their deaths, like milestones.

Which are your favourite pieces with each of them?
With Louis XVII, perhaps the "Health report for Louis Capet" drawn up by the commissioners of the Commune de Service at the Temple on 18 November 1792. With the King of Rome, the health report for the "Aiglon" when he was 4, drawn up at the request of his governess, Madame de Montesquiou, on the day she was abruptly dismissed. With the Prince Imperial, it is this little box that sums up his life. It contains two medals, one bronze, one silver: a third one, in gold, was placed in his coffin.
Overview (Pre-sale)

Working for the imperial court was a feather in the cap of jewellers like Nitot as well as artists such as Robert Lefèvre, who made portraits of Napoleon and his family. 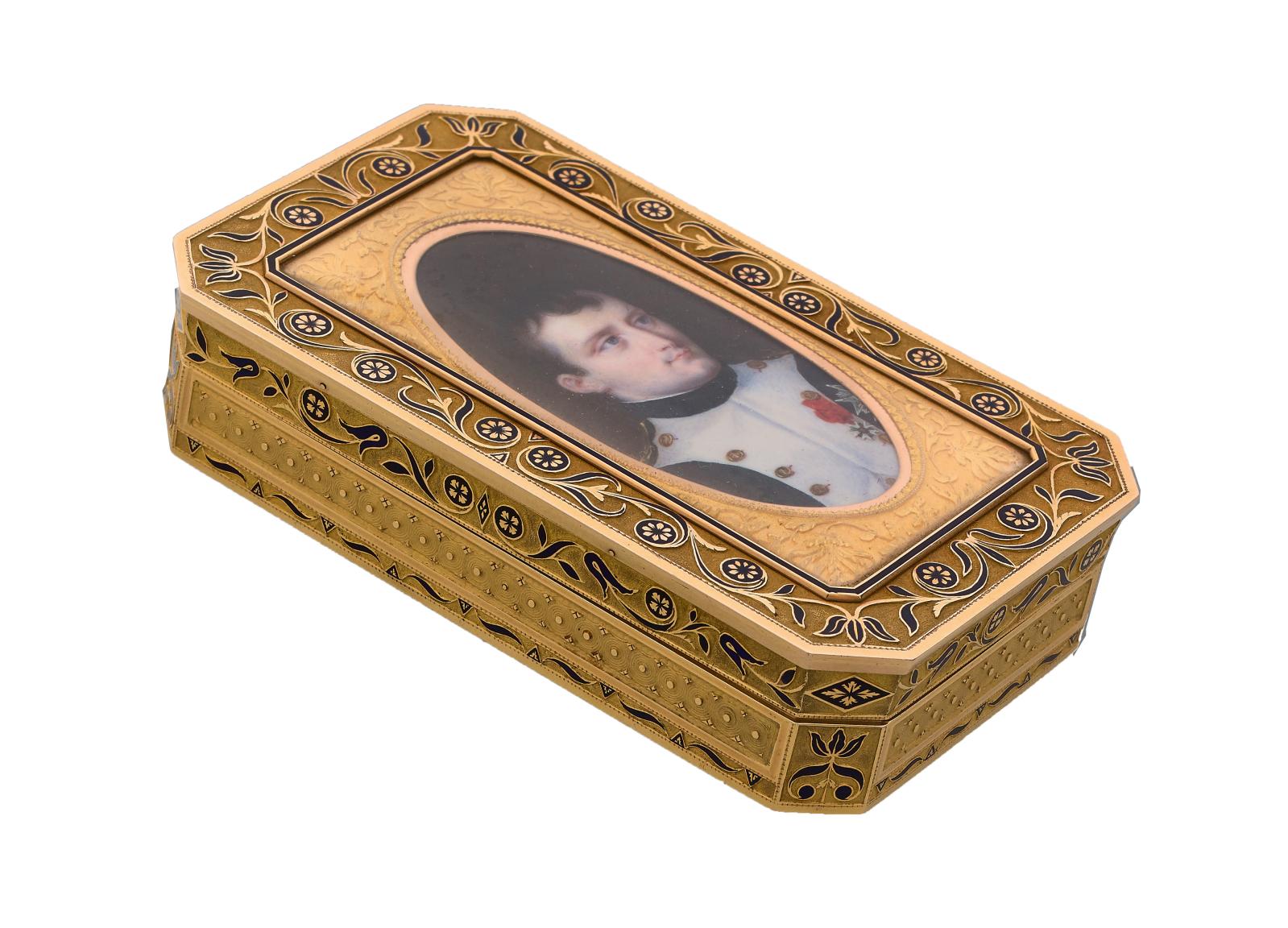 This snuffbox from the workshop of Étienne Nitot and sons, offered at the sale of the Amaury Taittinger collection, attests to the relationship between Marie-Étienne Nitot (1750-1809) and Napoleon. Trained by Ange-Joseph Aubert, supplier to the queen, he worked for Marie-Antoinette in the 1780s. His shop was on rue Saint-Honoré in Paris. Legend has it that his life changed course in 1800, when he saved the First Consul’s life, but there are several versions to the story. His son François-Regnault (1779-1853) worked with him and, in 1802, he was named "official jeweller". He made the consul’s sword, the jewellery for Napoleon and Josephine’s wedding and the coronation and many snuffboxes that were given as presents, like this one. Snuff tobacco was once considered to have medicinal properties and, according to Molière, to be the sign of an honest man. It became fashionable to own several snuffboxes, which, incidentally, indicated their owner’s social rank. The Republic added them to its list of official presents, and so did the Empire. First Consul Bonaparte understood the importance of diplomatic gifts and rewards. In his portraits, he often chose to be depicted wearing the uniform of a colonel of the guard: green for cavalrymen, blue for foot grenadiers. This snuffbox’s miniature on ivory is unsigned but it is very similar to the imperial portraits by Robert Lefèvre (1755-1830), who had exhibited his Portrait of Napoleon wearing the Uniform of a Colonel of the Foot Guard Grenadiers at the 1806 Salon before painting, thanks to the protection of Denon, director general of museums and head of the imperial fine craft workshops, 40 portraits of the Emperor, no two of which are exactly alike. Napoleon held him in high regard, even preferring him to Isabey, another supplier of portraits for miniatures, finding them too similar to each other. He is considered the Empire’s official iconographer.