A Historic Painting by Tobeen: An Avant-Gardist of the Basque Country

From Cubism, the painter retained a synthetic vision of his subjects, immortalizing the Basque Country’s traditions while remaining modern. 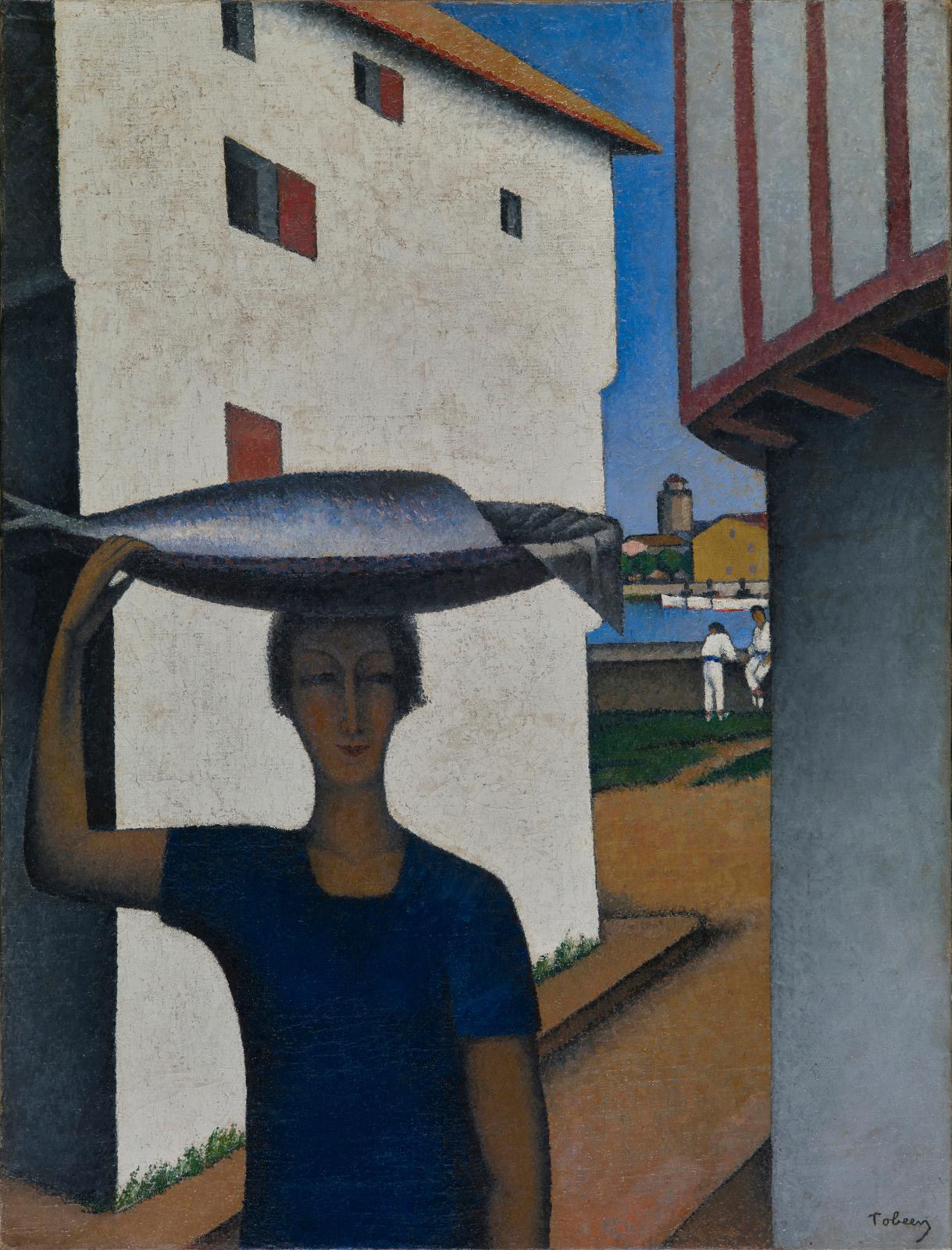 This painting by Tobeen has not been seen on the market since the 1927 Salon d'automne, when it was acquired by the present owner’s grandfather—a plus for this piece, which, in addition, belongs to a small body of works: just 300 by the artist are known to exist. Born in Bordeaux, Félix Élie Bonnet, his real name, often stayed in Ciboure between 1909 and 1919. This painting is a pure condensation of the Basque Country. The particularly limited palette features his signature colors: the white of the whitewashed houses, the reddish-brown of the half-timbering and shutters coated with oxblood to protect them from insects and humidity, the blue of the dazzling sky and the azure of the tuna in the wicker basket the young woman is balancing on her head. Tuna fishing on the Basque coast is a tradition dating back to the 17th century. Until the 1950s, the streets of Saint-Jean-de-Luz and Ciboure rang with cries of "arraina bizi-bizia!", “fresh fish!” uttered by the Kaskarots, the female fishmongers who sold it.

Tobeen depicted this quaint scene with modernity, adding simplified shapes and contrasting flat colors to the careful framing and rigorous composition. The period during which he enjoyed discovering everyday scenes in the streets of Ciboure was also when he experimented with Cubism and participated in the movement’s exhibitions in France, Chicago, Boston and New York, where the 1913 Armory Show introduced these modern painters to America. Tobeen, who had been living in Paris since 1907, took part in the Cubists’ manifesto exhibition at Galerie La Boétie, when Albert Gleize and Jean Metzinger published their treatise on the innovative aesthetic. Another Basque subject, Les Pelotaris, seen at the 1912 Salon des Indépendants and acquired by art critic Théodore Duret, was probably the artist’s work that made the greatest impression at the time. Tobeen remained attached to his beloved adopted homeland all his life. He depicted it with geometric realism, stressing certain architectural details and the landscape’s main lines, turning them into emblems of the Basque Country. Women also hold a key place in his work. Estimated €25,000/30,000, his c. 1920 Vénus aux colombes (Venus with Doves), also called Le Nid (The Nest), illustrates the poetry of his brush.